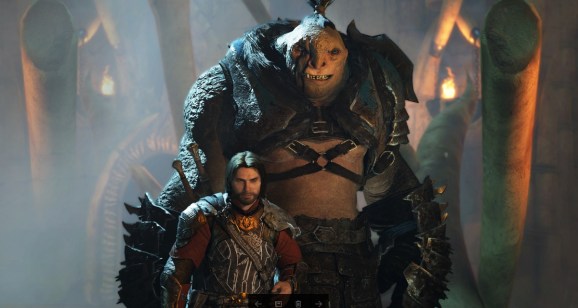 A man and his troll.

Shadow of War came out last October for PlayStation 4, Xbox One, and PC. The Shadow of Mordor sequel was the top seller in the U.S. that month, but fans criticized its pay-to-win mechanics. Recruiting orcs for your army is a big part of the game, but Shadow of War let you spend real money to buy orcs and equipments via loot boxes. Now, that market is gone.

The update also reworks the endgame content, renaming it the Epilogue and adding new narration from characters like Shelob and the Witch-king. Players can also unlock new character skins: Dark Eltariel, Baranor, and Celebrimbor.

The Nemesis system is also getting some tweaks. This is Shadow of War’s signature enemy AI feature, which has foes and recruits remember past fights and in-game events. You can now find more Legendary Orcs, and your followers will sometimes give you gifts.

The games industry has been backing away from loot boxes. Overwatch popularized the payment model in 2016. The team-based shooter has players buying loot boxes that contain random cosmetic items. But other games, like Star Wars: Battlefront II, gave players items that increased their power, giving them an unfair advantage over those who don’t want to spend extra money. Battlefront II also removed its paid loot boxes.

These days, Battle Passes are new hotness, thanks to the popularity of Fortnite. They have players spending an initial fee to unlock a progression system that rewards them with new items as they play. Unlike with loot boxes, its rewards aren’t random.