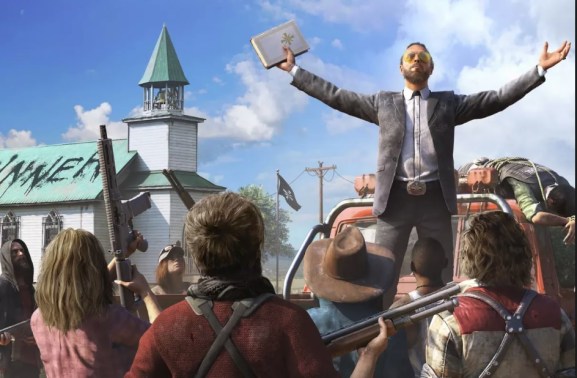 Far Cry 5's ad declares, "Nothing ever happens around here."

Ubisoft released its financial results for the first quarter of the financial year 2018-19, showing sales of $466.5 million for the period. This is a record first quarter for the French publisher. The period took place in the three months ending on June 30.

“We had a record first quarter, which exceeded our expectations,” Ubisoft co-founder and chief executive officer Yves Guillemot noted in a press release sent to GamesBeat. “This performance was fueled by steady growth for our back-catalog and an excellent momentum for PRI (program-related investments), once again confirming the increasingly recurring profile of our business and the ever-greater success of our digital transformation.”

Ubisoft had a major release right before the start of the quarter with Far Cry 5, which came out on March 27 for PlayStation 4, Xbox One, and PC. The driving game The Crew 2 released during the quarter on June 29 for the same platforms.

But much of Ubisoft’s business is coming from continuing games-as-service titles like Rainbow Six: Siege and For Honor. Back catalog bookings were at $387 million, up 74.7 percent from the same period last year.

Assassin’s Creed: Odyssey is Ubisoft’s next major release. The next installment in the open-world franchise comes out on October 5 for PlayStation 4, Xbox One, and PC.