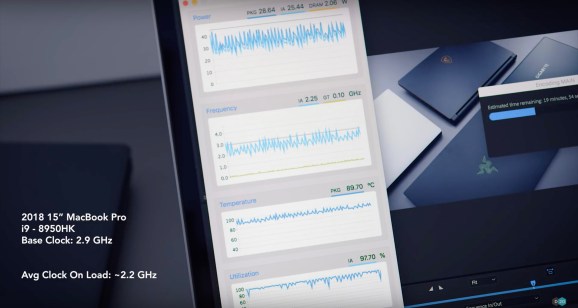 Apple’s latest and most expensive MacBook Pro performs so poorly under load that it shouldn’t even be offered to customers, a popular YouTube video creator alleges. Sharing benchmarking results in a video that has racked up over 360,000 views on YouTube since last night, Dave Lee says that the just-released Core i9 version of the 15-inch MacBook Pro falls markedly behind last year’s Core i7 model at computationally heavy tasks — unless the new laptop is aided by implausibly strong external cooling.

In the video, Lee shows Apple’s new six-core Core i9 machine dropping from its specified 2.9GHz clock speed down to 2.2GHz under load when being used in normal temperature conditions — a performance level that causes it to take minutes longer than an older model when rendering with Adobe Premiere Pro and limits its ability to smoothly display games at higher frame rates. But he notes that when the same machine is placed inside a freezer its performance improves tremendously, as the Core i9 is being adequately cooled. 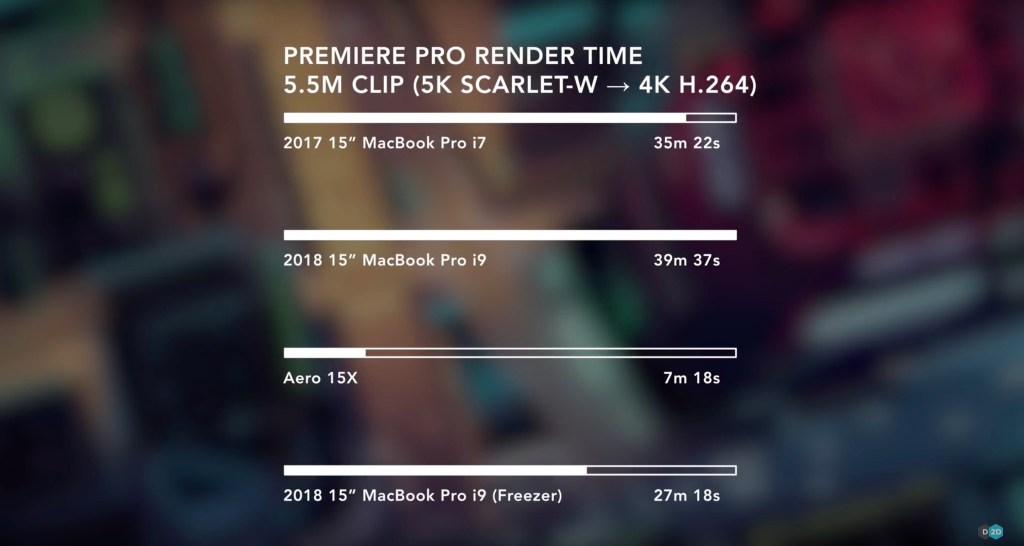 The freezer trick is a dramatic, camera-friendly way of illustrating a broader point — that the MacBook Pro doesn’t have enough internal cooling power to keep the chip running at the advertised clock speed. Apple says that the Intel Core i9 is capable of hitting up to 4.8GHz in Turbo Boost mode, with 2.9GHz as a base clock speed.

While Lee notes that this is far from the first MacBook to “throttle” — fall back in processing speed due to internal heat levels — he describes the Core i9’s level of performance degradation as “not acceptable,” particularly for professional users. “The Core i9 runs hot and throttles harder than any of the MacBooks I’ve ever used,” Lee says, noting that a computer that falls so far underneath its marketed spec is not the sort of product Apple should be selling to customers.

The Core i9 processor is an optional upgrade to the standard Core i7 version of the new 15-inch MacBook Pro, shipping in configurations that start at $3,099 and climb to $6,699 with added memory and storage. It is the first Core i9 chip to be offered in an Apple laptop.

Lee’s video undercuts Apple’s marketing of the new MacBook Pros as ideal for creative professionals, who are generally willing to purchase fast processors to speed up their daily computing tasks. It also dovetails with complaints regarding the company’s 2013 Mac Pro computer, which Apple later conceded was thermally constrained and in need of a complete redesign for 2019.