Experimental entertainment company Two Bit Circus plans to open its first “micro-amusement park” in Los Angeles in September. The 40,000-square-foot modern playground for digital and physical arcade games will be the first in a series, said Brent Bushnell, CEO of Two Bit Circus and son of Atari cofounder Nolan Bushnell.

In an interview with GamesBeat, the younger Bushnell said, “It’s coming together. This is the movie theater for interactive. It has zones, just like an amusement park, with different games in each area.”

I took a tour of the space in May as construction was in full swing at the downtown Los Angeles location. Two Bit Circus raised $15 million in early 2017 to build the place, which will have custom games, such as a giant match-3 game with a screen the size of a big TV, where you throw colored balls at a screen to make matches.

“We can’t wait to show it to people,” said Brent Bushnell, who cofounded the company in 2012 with Eric Gradman. “I use the analogy of Disneyland, with different places.”

The place is a hodgepodge of everything the founders love about old-school carnival games, circus performance, vintage video games, arcades, and cutting-edge future tech — all in a brand new kind of social play space. It has “immersive entertainment, multi-person virtual reality, and a full carnival canteen of molecular mixology and inventive eats — accompanied, of course, by liberal use of lasers and robots.” 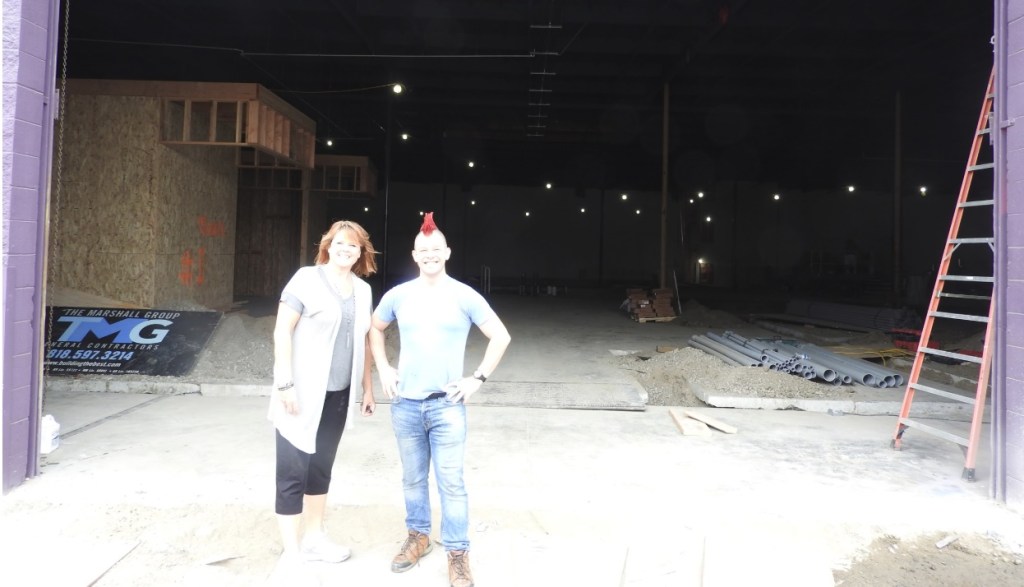 Above: Kim Schaefer (president) and Eric Gradman (cofounder) at the entrance to the Two Bit Circus micro-amusement park in May 2018.

The place features Club Zero One, a 100-seat theater where guests can participate in interactive game shows, such as a wine-tasting game where you can drink wine and make guesses about where it came from. Some people will go on the stage for special competitions as their friends watch.

“People fly to Hollywood from all over the country to watch their favorite game shows — and not participate,” Gradman said, showing off the theater. “Here, you can take part.”

The place also has narrative experiences that are similar to “escape rooms,” which are akin to real-life video games where people get together to solve puzzles and riddles under a time limit to escape a room. In this case, though, the experiences will be repeatable with different episodes and storylines. 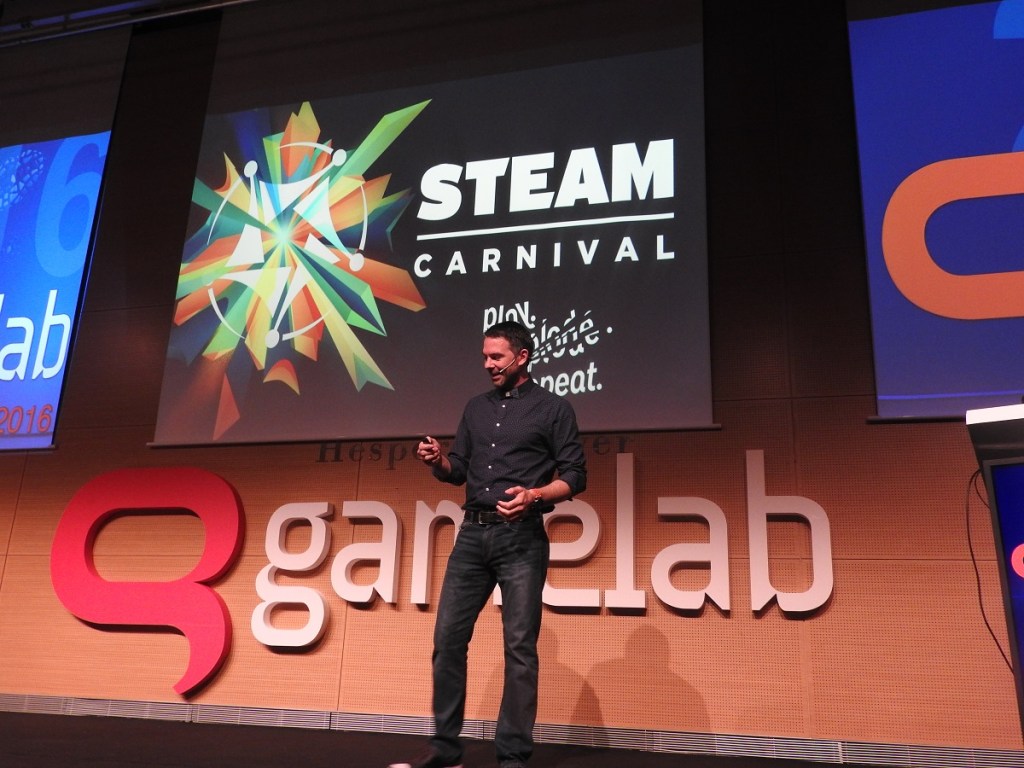 Above: Brent Bushnell is co-creator of the Steam Carnival, which preceded the micro-amusement park.

“We can bring in different content depending on the time of day,” Brent Bushnell said. “We can tweak it for student content in the day and have adult content like zombie shooters at night.”

Two-player games or four-player games will be available, as well as seated virtual reality experiences and full-body, walk-around VR from companies, such as Ubisoft. It will feature hot VR games of the day, with different VR, augmented reality, or mixed reality headsets. In one of the games, you’ll get a chance to be part of the bridge crew on a spaceship like the Enterprise from Star Trek. The experience will involve tasks that only an engineering officer can perform.

“People have to come together as a crew more effectively,” Gradman said. “You can press a button and change the experience. You could rescue an ambassador or deliver a package to a planet far away. It’s a twist on escape rooms, and we call them story rooms.”

Nancy Bennett, chief creative officer at Two Bit Circus, added, “The games tend to be more engaging when there’s a narrative attached to them.”

Two Bit Circus will also have full food and beverage service, a VIP club upstairs, and cabanas people can rent out for private parties with VR apps. 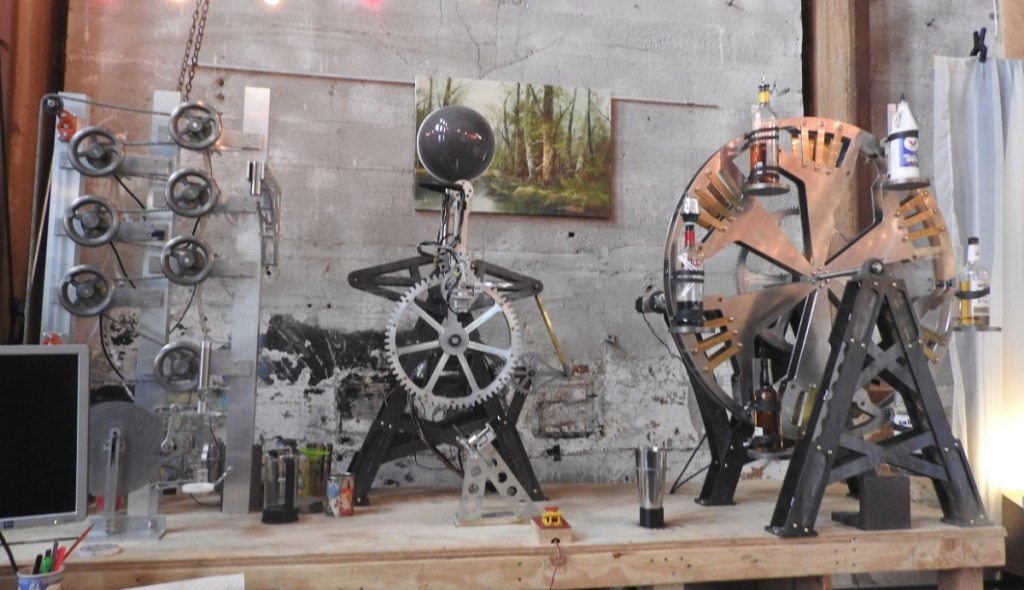 Above: The robot bartender at Two Bit Circus.

The space will feature a robot bartender who can do a show with a real bartender at a carousel bar with specialty drinks. Benches and tables will be available to sit at to eat, and the area will have some old-fashioned games.

“We call it a micro-amusement park because you can go from zone to zone and do different things you want to do,” said Bennett, as she gave me a tour of the space. “In Club Zero One, we’ll have a trivia game and wine-tasting game. We’ll have an arcade with a few throwback games, but a lot of this is our take on the arcade of today.”

Pointing to a section of the concrete, Bennett said the area would have old-fashioned midway games that have been updated for the electronic age. 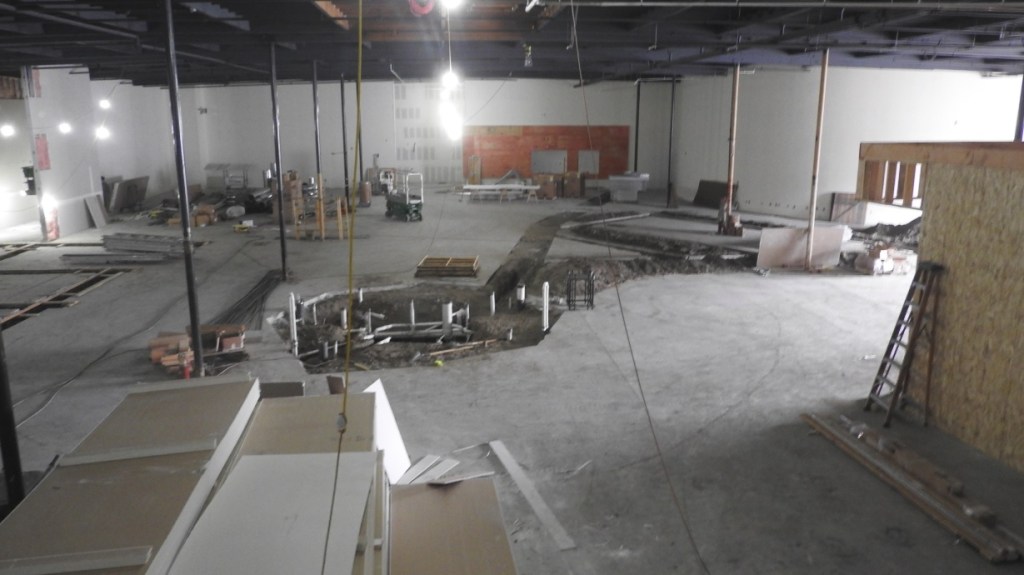 Above: The Two Bit Circus warehouse in May 2018.

“You can make a reservation to go to a story room, but you can play in the rest of the park while you are waiting,” she said. “And every time you come here, you can have a different experience. It’s not a one and done.”

“We’re inspired by old-school carnival games that got you and your friend playing together,” he said. “We’ve added some crazy tech and made games that get people laughing together.” 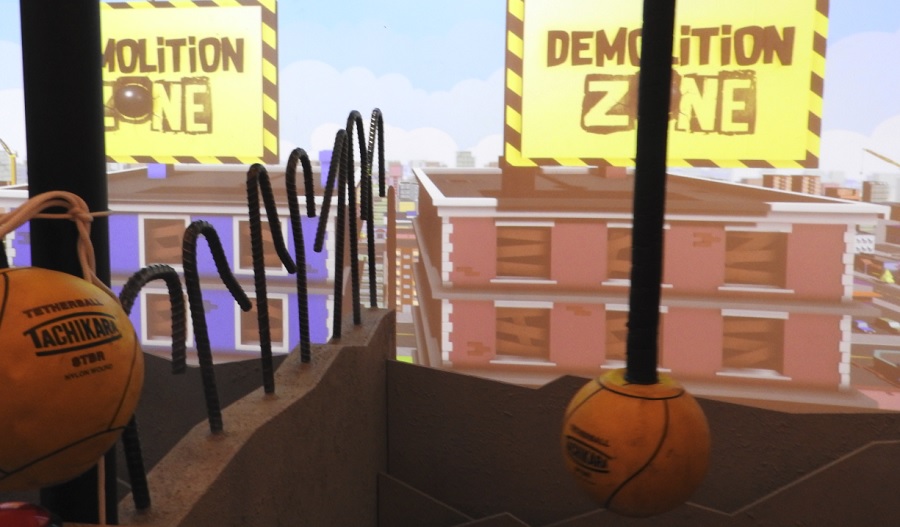 Above: Two Bit Circus calls this the Demolition Zone.

One game, Last Ball Standing, has some giant trackballs that you have to push with the full force of your hands.

And there’s another game, Demolition Zone, with tetherballs that hang on polls, which you swing at a screen in order to knock down buildings. I played the game and threw the tetherballs at target buildings while avoiding birds and construction workers.

“We’re building sophisticated systems with pretty high-tech behind the scenes to make some pretty simple games,” Gradman said. “It’s physical. You are laughing with people. You finish the game. You go to the bar and have a drink together, and you’ve made a new friend.”

A modern carnival in LA 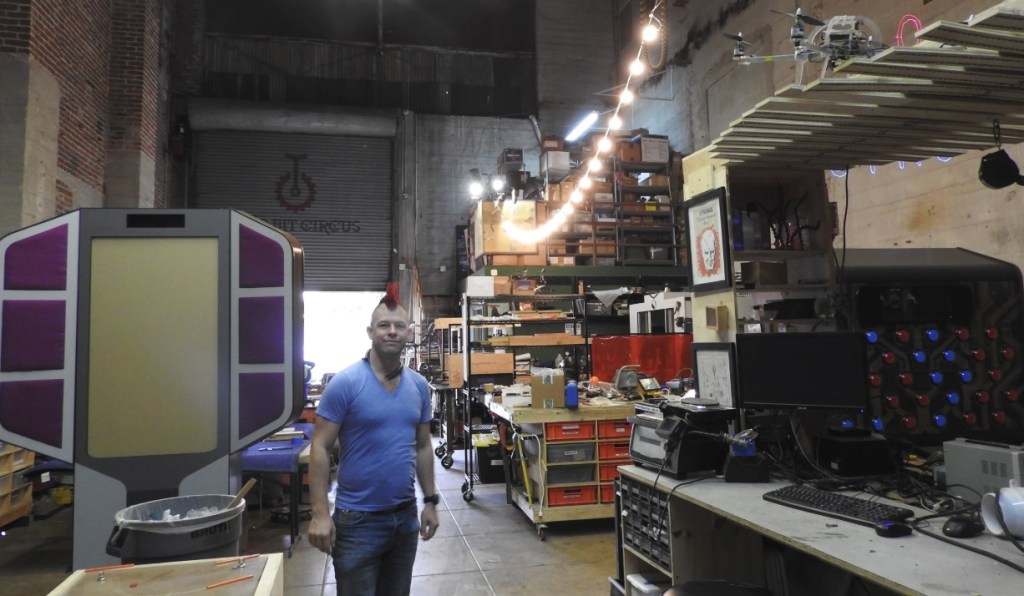 Above: Eric Gradman at the Two Bit Circus headquarters.

I got a tour of the older Two Bit Circus headquarters building, where many of the prototypes and midway machines were sitting in a large warehouse, waiting to move to the micro-amusement park.

“We are prototypers first,” Gradman said, pointing to all of the tools and gadgets in the place. They take games on the road and do most of the final integration themselves. 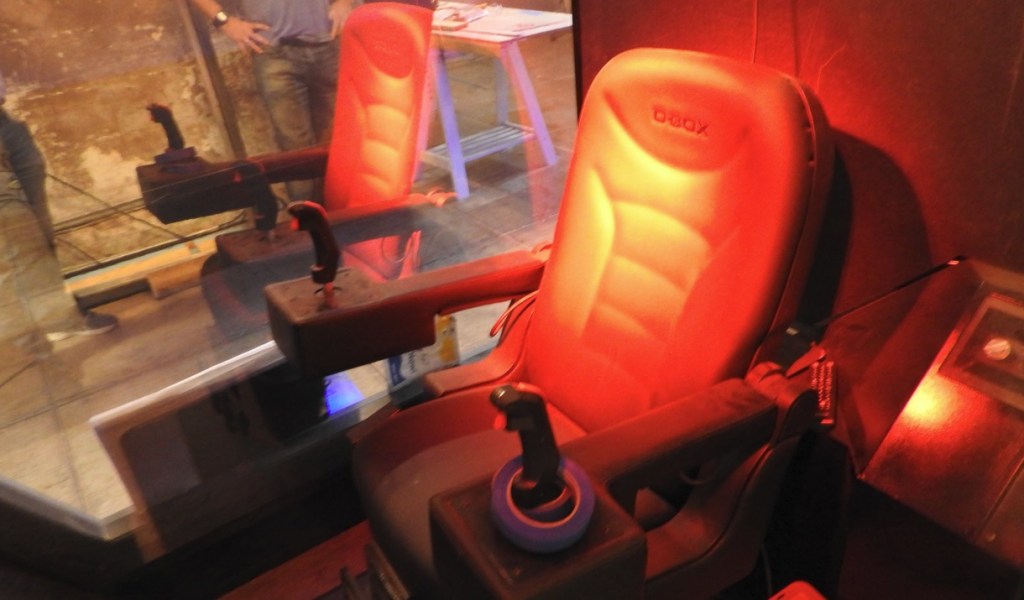 Above: You can play VR games like Battlezone at this arcade console.

While the cofounders started the company six years ago, they didn’t always plan on building a micro-amusement park. They were “nerds” who enjoyed creating their own live experiences and interactive art for parties, going back as far as 2008. Years before escape rooms became popular, they gained inspiration to create from the Michael Douglas movie The Game.

They build some party games and attractions for Dave & Busters, and they created a virtual reality experience that 30,000 people viewed during the Super Bowl. In 2015, they created a traveling show dubbed the Steam Carnival, with educational games for kids. Brent Bushnell and Eric Gradman were frustrated with out-of-home entertainment, which hadn’t changed since laser tag and mini golf.

“We sold out in San Francisco and Los Angeles with 5,000 people a day, and so, we said, ‘Let’s set it for a permanent home,'” Brent Bushnell said. “LA is our petri dish.” 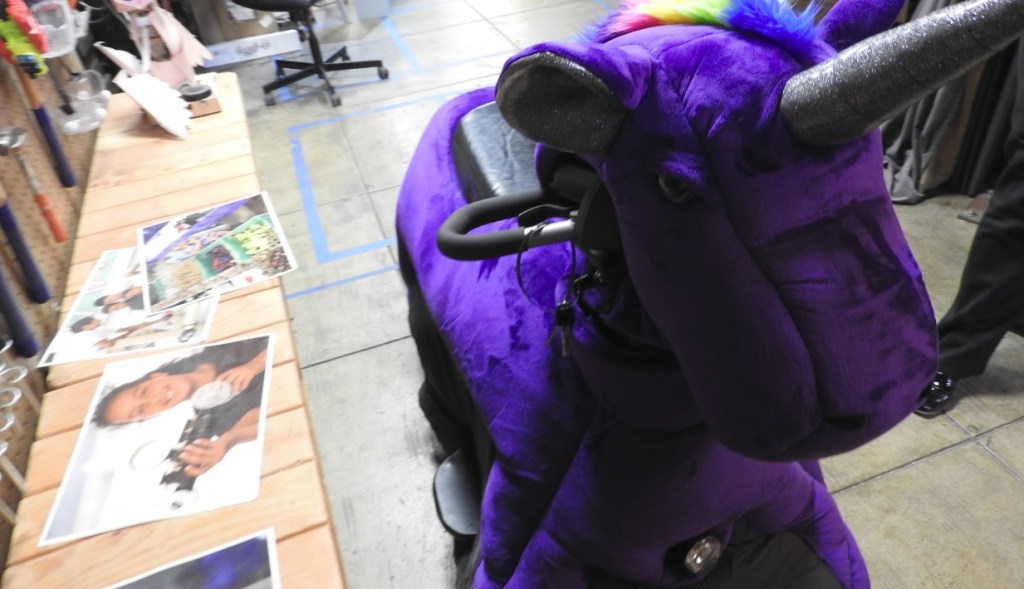 Above: A unicorn from Two Bit Circus.

They chose the Arts District in downtown Los Angeles because of the urban renewal happening as skid row warehouses are making way for modern buildings with owners, such as Spotify, Warner Music, and other big companies.

“We couldn’t have picked a better neighborhood,” Gradman said. “It’s full of new development, creative people. There are lots of high-rises going up.”

Bennett said that Los Angeles could be home to several of the micro-amusement parks. The first one has been in the works for 18 months.

All in the family 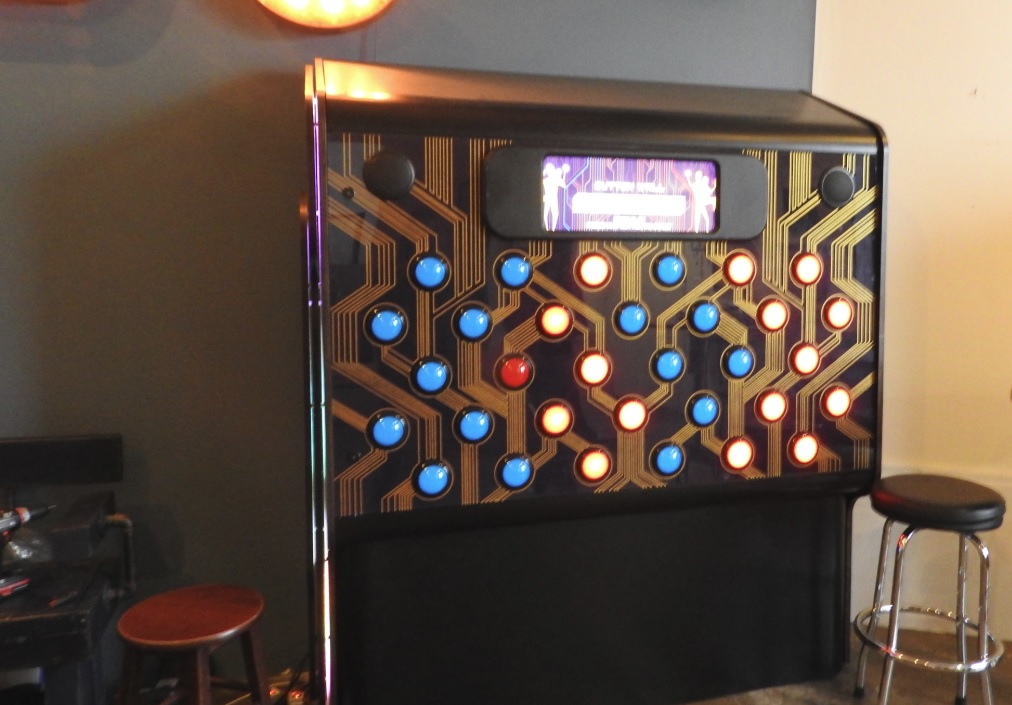 Above: A game on the wall at Two Bit Circus that seems like a mix of Whack-a-Mole and Twister.

Brent Bushnell hopes to expand to other locations, such as shopping malls, where the death of big retailers is leaving the property owners desperate for new forms of entertainment. Nolan Bushnell, who created both Atari and Chuck E. Cheese, offered advice, and other Bushnell siblings are working on the project, such as publicist Alissa Bushnell.

“He’s such a big kid,” Brent Bushnell said of his father. “He keeps threatening to move in. He helped with the brainstorming on what this could be.”

Brent Bushnell said the company has 55 people in its corporate headquarters, and it will likely have to hire as many as 100 people for the park in the next couple of months. Gradman is a former circus performer, and both he and Brent Bushnell are trained clowns. 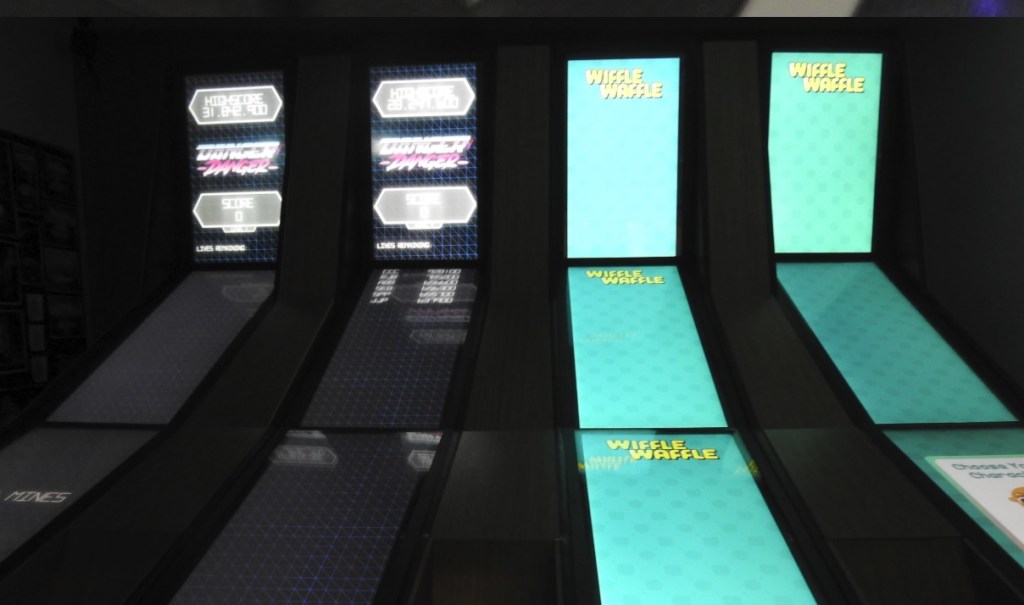 Above: An electronic version of a Skee-Ball style game.

While many machines seem like weird prototypes, Gradman said that every machine is designed so that outside manufacturing contractors can make them. Some are arcade cabinets that can support many different types of games.

He said the company will have grand opening events in September, and it will also invite corporations to sponsor events at the location over time. Meanwhile, the Two Bit Circus Foundation will create educational material to cultivate the next generation of inventors with tours and events for students.

“We’ve been preparing for this all of our lives,” Gradman said.