Esports revenues and investment are expected to grow, according to a survey by law firm Foley & Lardner and The Esports Observer.

The profession of esports, where video game players can win prizes in tournaments, has moved into the mainstream thanks to the popularity of games such as Epic Games’ Fortnite and Riot Games League of Legends. The survey was based on interviews with 124 industry professionals from esports and traditional sports teams and leagues.

Respondents said growth has come in the past year from increased interest in streaming deals from major tech companies and TV networks (69 percent), the growing involvement of traditional professional sports teams, leagues and figures (68 percent) and the broadening of sponsorships beyond brands endemic to gaming (59 percent).

The traditional professional sports industry, eyeing ways to diversify revenue streams, is the group respondents most expect to increase their investment in esports over the next year (57 percent), followed by private equity and venture capital firms (39 percent) and media groups (38 percent).

Meanwhile, respondents ranked advertising and sponsorships as the area they expect to drive the most revenue growth in esports over the next year, followed by media rights.

“Respondents’ belief that advertising and sponsorships will drive growth is a positive development for esports as these revenue streams benefit participants across the industry, independent of the developers and publishers that largely dominate the broader gaming industry,” said Michael Wall, counsel and a member of Foley & Lardner’s sports industry team, in a statement. “This growth can be expected to accelerate as traditional sponsors become increasingly comfortable with evolving metrics for evaluating return on sponsorship investment.”

“The near-term growth anticipated from sponsorship deals might be explained by their relatively lower degree of complexity and duration compared to media rights deals, which – especially considering the impact of mobile streaming – are likely to contribute significantly to the industry’s long-term growth,” said Tobias Seck, a business analyst at The Esports Observer, in a statement.

But survey respondents also said they were aware of risks. Match fixing topped the list of threats to the legitimacy and growth of esports, with 78 percent of respondents calling it a serious or moderate risk. A substantial percentage said the same of the recent repeal of U.S. net neutrality regulations (71 percent), the lack of safeguards and protections for underage players (60 percent) and illegal gambling (57 percent).

“When you consider the amount of money in esports gambling, combined with the ability of one player to make or break a team’s prospects for success, match fixing is really the elephant in the room,” said Mary Braza, co-chair of Foley & Lardner’s sports industry team, in a statement. “Looking ahead, match fixing has the potential to negatively impact the popularity of esports if fans get the impression that cheating is widespread or that results are illegitimate.” 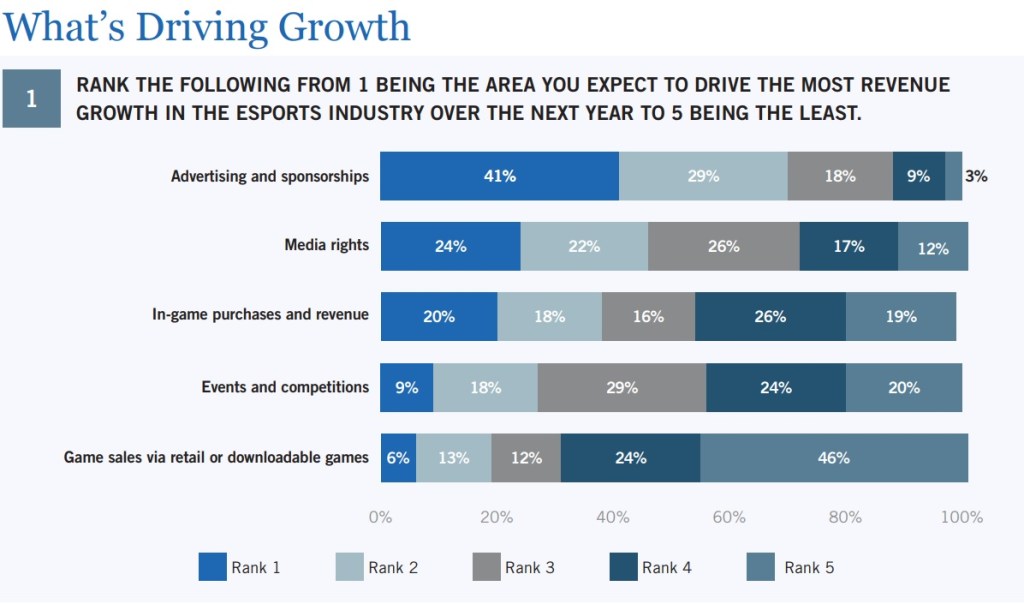 Above: Advertising and sponsorships is likely to be key to revenue growth for esports.

A strong majority (69 percent) said they are focused on staying up to date on legal issues concerning esports and complying with current laws and regulations. Respondents also said legal issues of concern include cybersecurity and malware attacks targeting gamers’ and fans’ data (65 percent), intellectual property rights and licensing issues (50 percent), cyberbullying within games (43 percent) and contracts that do not provide adequate protections for players (43 percent).

“Survey respondents are keenly focused on legal compliance. This is not surprising as the commercial growth of esports requires greater sophistication across the landscape of potentially applicable laws,” said Jon Israel, vice chair of Foley & Lardner’s sports industry team, in a statement. “At the same time, the unique aspects of the esports industry makes the panoply of legal considerations novel and complex, particularly in the absence of laws or regulations specific to esports.”

Amid this risk and uncertainty, respondents feel a need for stronger esports institutions. They expressed the greatest support for players associations that represent the interests of professional esports players (77 percent), likely to bring greater credibility to esports and to protect players from exploitation. Another 57 percent agreed with the need for an organized lobbying group to spur development of esports and influence government regulations. Roughly two-thirds of respondents expect that each would be established within three years.

The creation of an overarching esports governing body was more controversial, with 47 percent indicating a need for such a body and 34 percent dissenting. Supporters indicated that such a governing body could boost legitimacy and mainstream appeal, while opponents argued that it would be impractical or even counterproductive, given the disparate and evolving nature of esports.

“The survey responses indicate some recognition of a need — and overall desire — for the esports industry to band together,” said Kevin Schulz, co-chair of Foley & Lardner’s sports industry team, in a statement. “There’s also notable uncertainty about how that would look and acknowledgment of the practical issues with applying a uniform standard in a constantly changing and dynamic industry comprised of different games and developers.”

Respondents also identified other developments that will support the burgeoning esports industry. Over the next year, the overwhelming majority (88 percent) foresee the construction of more specialized esports facilities and 47 percent expect virtual reality esports to grow substantially.