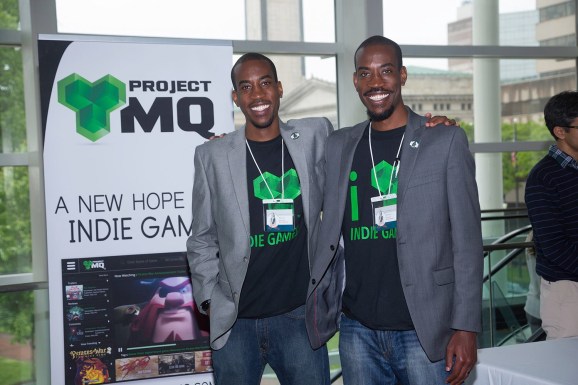 Brothers Marcus and Malcolm Howard are working on ProjectMQ, a site for developers to upload media content.

Twin brothers Marcus and Malcolm Howard have spent the last five years working on ProjectMQ, a multimedia hub to help people find upcoming indie games. They envision it as a platform that can live on PC and consoles alike, a central place where developers can upload GIFs, images, and videos as well as link directly out so that interested players can buy their games. People can sign up for ProjectMQ’s waiting list on their website, and the Howards are aiming to exit closed alpha by the end of the year.

“We’re building [ProjectMQ] in Unity, so we can write the code one time and deploy it to game consoles, connected TVs, mobile devices, and computers,” said Marcus Howard in a phone call with GamesBeat. “There’s a learning curve for that, and it was taking us too long to get usable product. We decided to just start with a website, because that’s what our background is in.”

Howard envisions ProjectMQ, which stands for “Meta Qube,” to be a kind of library for indie games. A tagging system will help people find titles that they’re interested in, and each time a developer or publisher uploads new content, their game will pop up on the front page. The platform already has Steam integration so that developers can link out directly to a product page. And they’re currently working on adding support for music as well for sites like SoundCloud.

Both brothers have been working on the project on the side. By day, they’re full stack web developers, and they initially dreamed of developing their own game. But when they found how crowded the market was, they decided that they had “almost no chance of reaching a target audience” and began noodling on how to tackle the problem of discoverability instead. This was five years ago, an already long journey made all the longer because of a number of setbacks they encountered.

Some of these challenges were technical as they learned how to build ProjectMQ. For instance, Howard says they initially began storing media content on Dropbox servers. This wasn’t a problem at first, but soon they were hosting content from nearly 500 games, and the website was loading at extremely slow speeds. They ended up having to start over, and now their library has around 80 games in it.

The Howards also ran into challenges raising funds. They’re attempting to raise a seed round of $250,000, but they’ve had trouble rousing investors’ interest. Howard says that part of this is due to the fact that they’re headquartered in Florida.

“We went to a statewide business competition and were a finalist back in 2015. They had a kind of mentor, prepitch day, where you could give your pitch and 15 people out of the local community would give you feedback,” said Howard. “One guy literally told me, ‘This is a great idea, but you’re in the wrong location. You shouldn’t be here. You need to be pitching this in California.'”

The latest obstacle in their way is the General Data Protection Regulation (GDPR), new rules that aim to give users in the European Union better control of their private data. Howard had gathered a mailing list of over 1,000 users who wanted to hear when ProjectMQ would exit its closed alpha. In order to be GDPR-compliant, they have to reach out to the list and ask if the users consent to receive invites in the future.

This is because of the original way they invited folks to the mailing list, which included language that said “Complete this survey and we’ll send you credentials once early access is live” rather than explicitly asking users to opt in. This is particularly a problem for ProjectMQ because its waiting list counts registered users from around 48 countries with a significant number of them in Europe.

“[GDPR] basically turned our 1,000 users into about 150. Which is really tough pill to swallow, because we spent three years building that list,” said Howard.

A crowded market for community-building

While Howard and his brother have been working through the obstacles in their path, others have tried their hand at solving the discoverability problem for indie games. Cartrdge acts as portfolio site where developers can upload GIFs, images, videos, and sound bites from their games. Services like Jump enable players to stream from a small selection of indie games.

Indie developer and Nyamakop cofounder Ben Myres says that most devs turn to sites like IndieDB, ModDB, Itch.io, and TIGSource to host dev logs, multimedia, and game files. And these sites have been around for a while — IndieDB started in 2009 and ModDB launched in 2002. Myres says that ProjectMQ would have to differentiate itself significantly from these sites, especially since developers wouldn’t want to host information across too number places because that would be a pain to update.

“At a conceptual level, I understand the appeal of a site like this: It’s really tough to find communities of people who might be interested in your game! So a site building a big community of people interested in discovering new work is a dream — and I think IndieDB and ModDB has shown the value of this,” said Myres in an email to GamesBeat. “As indies we’re desperate to find as many people as possible to see our work, and ‘quality’ people too, people who are interested in your work specifically. So if ProjectMQ can create another sizable community of people to tap into, then that’s fabulous.”

Even with all these setbacks and other companies addressing the same needs, the ProjectMQ has gathered a small community of people who are interested in testing out its platform. Howard says they have a Slack channel with about 350 developers and publishers whom they’re onboarding onto the site.

The Howards have tried to select a diverse array of games for ProjectMQ. Curation is definitely tricky, especially since they don’t want to end up having a library that’s skewed just to their tastes. They’re thinking about finding a way to select titles in a way where they don’t have “100 percent of the influence.”

Ultimately, Howard says that they want to help developers get the word out about their games, to “build their community and their following throughout the entire development life cycle.” The folks who have signed up for ProjectMQ come from all over the world, and Howard believes that their platform can help developers from under-represented countries or emerging markets.

“Malcolm and I believe very strongly that indie developers are entrepreneurs too, but they see themselves more as starving artists than actual businesspeople. But they produce a product. It just happens to be digital entertainment,” said Howard. “Because the tools are free, anyone can be a developer, which means anyone can be a business owner. We just need to give them infrastructure so they can be successful as business owners.”