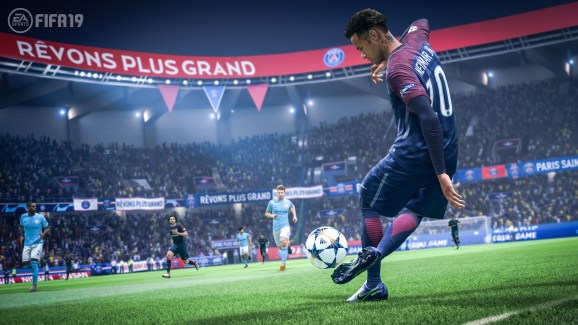 Electronic Arts‘ stock price fell 6 percent in after-hours trading as the big video game publisher signaled that it wasn’t as bullish about the coming quarters as investors thought it should be. EA managed to beat Wall Street estimates for the first fiscal quarter ended June 30, but it didn’t change its estimates for the full year, prompting investors to wonder if it anticipates weaker quarters in the rest of the year.

For the full year, EA expects to make a billion dollars on $5.6 billion in revenue. But that’s apparently not good enough. The question at hand is whether EA lacks the breadth of titles to smooth out its slow quarters as it focuses all of its resources on its blockbuster games such as Battlefield V. A decade ago, EA would launch 60 titles a year. But now it has just eight PC/console games coming this fiscal year, and two of those are small titles from its indie games label.

That small release slate makes sense in part because it generates more revenue from each title, and it makes a lot more money than it once did from live services, or revenues such as microtransactions on existing games such as its FIFA Ultimate Team feature in FIFA 18. Michael Pachter, analyst at Wedbush Securities, said in an email that live services were particularly weak during the quarter.

EA hit these estimates, but it had a weaker forecast than expected. EA reported net revenue of $1.14 billion in GAAP revenue, and net income of $293 million, or 95 cents a share. As for the forecast, EA chief financial officer Blake Jorgensen said that the company remains conservative about predicting revenue growth in the future.

“Our strategy continues to center on delivering a collection of amazing games and content, wrapped in services, with more ways to play, watch, share, create and connect that enable us to grow our global audience,” said Andrew Wilson, CEO of EA, in a call with analysts.

During the quarter, EA didn’t launch any major console or PC games, except for the low-budget indie game Unravel Two. In the second fiscal quarter, EA will launch FIFA 19, Madden NFL 19, NHL 19, and NBA Live 19. This fall, EA will launch Battlefield V, and EA will debut Anthem and Sea of Solitude in early 2019.

On the mobile front, EA has stalwart games such as Star Wars: Galaxy of Heroes, which pulled in an estimated $54.8 million in the first fiscal quarter, according to measurement firm Sensor Tower, down from $63.6 million in the same period a year earlier. (Sensor Tower’s numbers do not include any deferred revenue). But FIFA Soccer likely brought in $22.2 million, up from $15.9 million a year earlier, Sensor Tower said.

EA said it launched its FIFA Mobile with partner Tencent in China during the quarter. The game debuted via Tencent’s mobile messaging system WeChat, and Jorgensen said that results so far were very promising.

But Pacther noted that mobile game revenues fell during the first fiscal quarter. Live services were up a “wimpy” $30 million in the quarter, Pachter said. In a call with analyst, Wilson said that FIFA’s World Cup content update engaged more than 15 million FIFA fans during the World Cup. Overall, FIFA engages more than 100 million fans worldwide.

While mobile game players have embraced free-to-play monetization and virtual goods, EA still has to hit the right balance for console and PC gamers. On that front, EA is still recovering from its blunder in November of over-reaching on Star Wars: Battlefront II, where players objected to being charged for gameplay-related microtransactions (for powerful characters like Darth Vader) after they had already paid $60 for the game.

Wilson had to apologize and EA reversed the policy and the company brought back microtransactions in March, where the items to be purchased were cosmetic only and did not affect gameplay. The whole incident triggered the whole game industry to think about the limits of live services and microtransactions in both paid and free-to-play games. And it even prompted some regulators to weigh in. In July, Warner Bros. decided to kill loot boxes in the latest update of Middle-earth: Shadow of War.

Wilson said on the call that EA had “learned from that experience” as it prepares to launch Battlefield V.

“Origin Access Premier launches next week, a first-of-its-kind subscription service that will include unlimited access to our newest PC titles. We believe strongly in the transformative nature of subscriptions,” Wilson said.

During the quarter, EA acquired the streaming assets of Gamefly for less than $50 million. Jorgensen said EA saw a unique opportunity as Gamefly had created tech that could serve as middleware for streaming, and that EA with impressed with the quality of the team in Tel Aviv. He also said EA bought Industrial Toys, the mobile game company created by Halo co-creator Alex Seropian, in part because the company was working with the company on a work-for-hire title and was impressed with it. He said, “You will see something in the next couple of years” from Industrial Toys that represents an “innovation in mobile.”