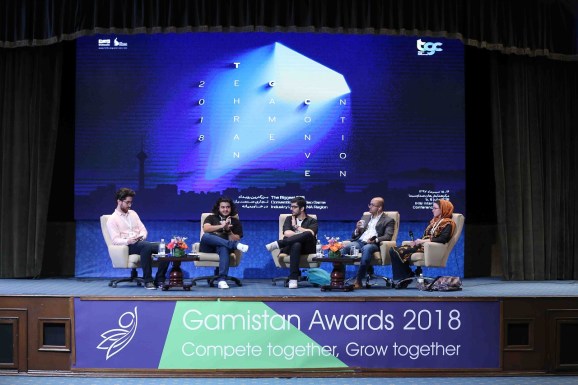 The nonprofit Iran Computer and Video Games Foundation (IRCG) has wanted to bring international game developers to Tehran for over a decade, and it finally succeeded with the first Tehran Game Convention in 2017. The inaugural event drew larger crowds than the organization expected, and this year’s festival has only grown. It added the Gamistan Awards to recognize outstanding titles from all over the Middle East and North Africa as well as other emerging markets, and IRCG has plans to build up the event even more.

IRCG president Hasan Karimi says that his organization’s mission over the years has been to help local developers by sponsoring them to attend games events abroad and to negotiate global publishing deals. However, it was in a tricky spot because of a lack of financial resources as well as overcoming publishers’ fears. And sending developers abroad wasn’t ideal because it had to select only a handful of people.

“There has been always this fear among international publishers about then current situation in Iran while we were talking with them at different expos about publishing our games globally,” said Karimi in an email to GamesBeat. “We wanted to show that we are not bluffing when we were saying Iran has the most game developers and game titles in the MENA region. We needed to bring the publishers to Iran and introduce our industry to them as a whole.”

So IRCG set out to start a B2B event that would bring publishers, investors, and international developers to Tehran as both a business and educational opportunity for local game studios. Because it lacked the name recognition abroad, it partnered with Game Connection, which co-organizes the event. For the first year, they expected an attendance of about 500 Iranian developers. But local interest was high — 1,200 showed up.

This year, IRCG changed up its model in order to attract more international attendees.

“Moreover, we decided to have an opening ceremony and invited Kate Edwards to come as the keynote speaker, and we were lucky that she accepted and honored us with her presence,” said Karimi. “We continued the ceremony with a pitch festival. More than 10 of our good game developers presented their games in front of international publishers and national investors for an hour and half.”

Above: Woodfarer won the Gamistan Award for Most Innovative in the PC category.

Unfortunately, one of the changes IRCG made was that developers no longer get free passes to attend the conference. It does offer a 50 percent discount for students and provides 10 free booths for indie studios to show off their games, but it had to shift the way it was pricing its tickets to deal with expenses.

For those who can’t attend Tehran Game Convention, IRCG also runs a free yearly festival — the Tehran Game Festival, which started in 2012 and is free to attend at the end of the Persian year. Where the TGC is more business-focused and features workshops and a meeting space, TGF is more about the show floor.

Karimi says his organization is also planning on launching a B2C event that will occur right after next year’s Tehran Game Convention.

“Now we are trying to organize the B2C event for next year after TGC and form a week dedicated to video games in Tehran,” said Karimi. “It will have an esports competition also. We believe Iranian games need a public showcase because we have many good local games with more millions of users.”

All of these events are meant to highlight the talent and creativity in Iran, but the Gamistan Awards aims to broaden that. The name combines the word “game” along with the suffix “-istan,” which Karimi explains simply means “place” in Farsi. The organization describes the idea of Gamistan as a place that “is not a politically, or geographically bordered area,” inviting developers from 33 countries to submit their games on equal footing.

A few other countries in the Middle East also host games events, like GamesArabia and the Digital Games Conference in United Arab Emirates and Gamer’s Con in Saudi Arabia. Karimi says IRCG wants to enter the fray and make Iran the “hub for video game business in the region” by reaching out to other countries in MENA as well as beyond. Developers from nearby countries like Iraq and Azerbaijan can submit their games to the Gamistan Awards, as well as from farther places like India and Maldives.

“We have been running a national festival [Tehran Game Festival] only for our national games for 7 years in row. However, with the power of our game industry combined with TGC, we wants to make Iran the hub for video game business In the region,” said Karimi. “In order to achieve this goal, we need other countries in the region that are under development like us to participate. One of the ways to increase this participation is to accept the games from the countries that are similar to us and hold a festival.”

Moving forward, Karimi says the biggest threat to Tehran Game Convention is politics. Most recently, Iranian Foreign Minister Mohammad Javad Zarif and the U.S. President Donald Trump traded barbed remarks on Twitter, straining an already contentious relationship. More specific to games, Iranian developers have suffered in the past because of sanctions, which banned their titles from marketplaces like the Apple App Store. But Karimi is optimistic that games will emerge relatively unscathed despite mounting international tensions.

“Of course, the main threat to TGC is the politics. However, we are lucky, all us I mean because we are working in an industry that one of its bold message especially during previous years has been ‘games without borders.’ Just like what Unity did a year ago in Netherlands for their Unite event,” said Karimi. He added, “I do not want to say it is easy, but we strongly believe it is possible and we will show that building walls are not going to affect what we are doing.”