Semblance’s world wobbles and jiggles, but it’s a solid puzzle-platformer in a whimsical world that packs in tiny moments of triumph. It’s indie studio Nyamakop‘s debut title, and it started out as a student project. Semblance went on to pick up awards and nominations from festivals like SXSW, Brazil’s Independent Games Festival, and BitSummit, where it took home the award for Excellence in Game Design.

The developer teamed with publisher Good Shepherd Entertainment to release the game on PC as well as Nintendo Switch (it’s out now), which is the platform I reviewed. The dazzling colors would look fantastic on a monitor, but a portable console like the Switch is the ideal way to play Semblance. Its quick levels and brainy puzzles are great for a morning commute, and for the trickier challenges, you can set it down, chew it over, and pick it back up to play.

Semblance has a loose story about crystalline creatures overtaking a plush jelly world. It’s up to the blobby protagonist to gather orbs and restore the balance of nature. In order to do so, you’ll visit four different biomes, each introducing new mechanics and showing off different ways to use the environment. 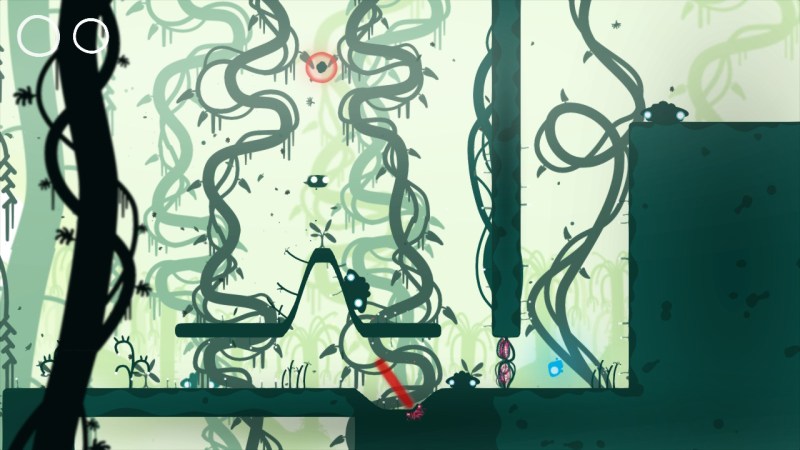 Above: In Semblance, you sometimes make your own obstacle course.

When you start out, you can dash through the air and slam yourself against walls and platforms to deform them as you need to. You might turn a sheer cliff into a staircase or shoulder aside an obstacle so you can slide in underneath. But the complexity ramps up as later levels introduce lasers, no-dash zones, and areas where you have to squish yourself into different shapes, sometimes in sequence. You never gain any new abilities; instead it’s about using the squishiness around you in creative ways to progress, catapulting yourself or trapping enemies with an artificially created blockade.

Most of the puzzles are intuitive, but a few are frustrating in the best way. The head-scratchers are often minimalist, which makes them just that much more infuriating. When you finally figure out the solution, it’s always something way more elegant and simpler than you were thinking. It’s immensely satisfying.

Semblance features striking colors, such as neon fuchsias and toxic greens. It’s never overwhelming, though. Instead, it feels like you’re exploring a dense jungle populated with tiny blinking animals who gawp at you as you leap over deadly spikes. 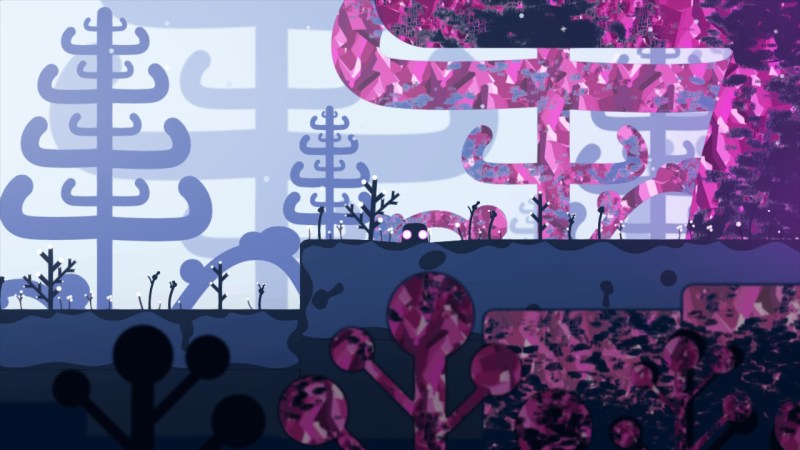 Above: Each biome in Semblance has a different color scheme.

At first, I found the art style to be simplistic, using varying shades of one color with another tossed in for contrast. But the farther I got in the game, the more I found myself attracted to its quirky silhouettes and bold hues. Nyamakop has also packed a lot of details in the world — little tufts of swaying grass, solemn creatures in the background, and trees and foliage in the foreground. You can look for collectibles as well, which are mysterious totems that glow and feel rather momentous when you discover them.

Accompanying the colors is a terrific soundtrack that is occasionally eerie, giving off the vibe that you’re exploring the Fortress of Solitude. Other times it picks up with a catchy beat.

A thin veneer of story

As you play on, you’ll encounter cave paintings that hint at more of the narrative. The protagonist and their friends are all one color while the enemies are another. Occasionally these colors are complementary, like one level that’s entirely in shades of green and red, and all the creatures have similar shapes and forms. Many of the enemies are also non-aggressive, though you do have some that chase you with lasers. 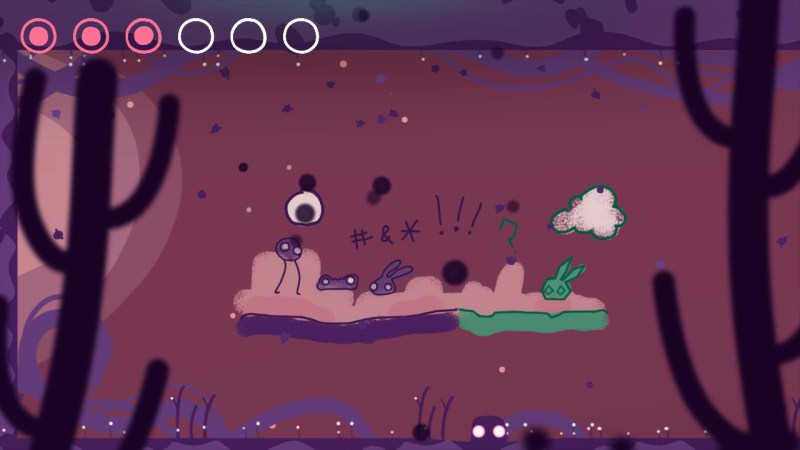 Above: Occasional cave paintings hint at the story.

I might be extrapolating, but it felt like the story was playing with some themes of mirroring or living in harmony. I also found it meaningful that you start out solving puzzles by changing the environment into different shapes, and eventually you move on to changing yourself.

I was a little disappointed when these potential themes weren’t explored in the game’s ending, which also felt rather abrupt. This is a minor complaint because it’s a puzzle platformer — and I don’t believe you need to have too much narrative to make a fantastic game in that genre. However, I do feel like it was a bit of a missed opportunity. It could have had more depth, but perhaps the developers decided to simplify.

I encountered a few bugs, one of which required me to exit the game and fire it back up. I had gotten stuck in a wall and couldn’t manage to free myself. In another situation, I was hiding from a laser under an overhang, and it passed above me several times without hitting me. Then — even though I hadn’t moved at all — it killed me on the next pass.

Hopefully, these are first-week issues that Nyamakop will roll out fixes for. None of them are game-breaking, but it was a little annoying when I found them. 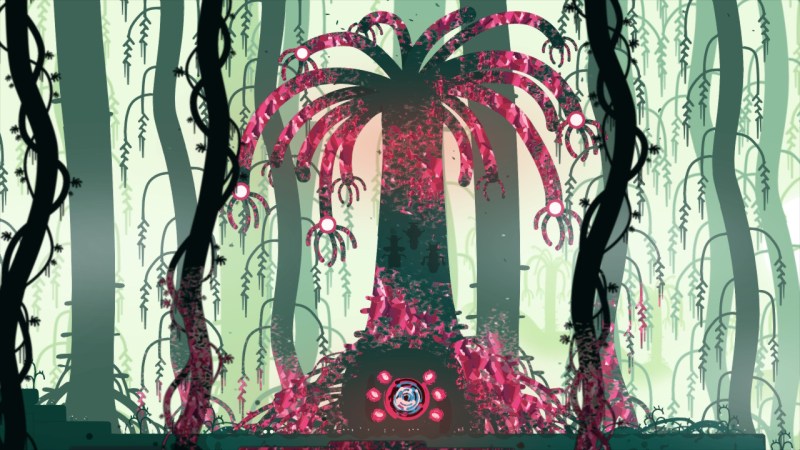 Above: The portal to each biome is in a different tree.

Semblance is a unique take on the puzzle-platformer. Its wobbly environment reminded me a little of Ian Snyder’s colorful The Floor Is Jelly, but instead of ricocheting around a bowl of Jell-O, you have to be precise. If you create a hill and launch yourself off of it a little too much to the left, then you’ll die. When you nail the landing, it feels like a victory.

I love that Semblance is challenging, and its presentation is lovely as well. It has a unique look, full of organic shapes and eye-catching colors. Though it’s light on story, it’s worth dying a few dozen times to experience.

Semblance is out now on PC and Nintendo Switch. Nyamakop sent us a digital code for this review.