Video games have become a $137.9 billion market in 2018. And computer graphics is expected to hit $124.5 billion this year, according to market researcher Jon Peddie Research.

But while games drive demand for better computer graphics, it’s interesting to see that the two markets don’t move together in lockstep. While games are expected grow 13 percent in 2018, according to market researcher Newzoo, Jon Peddie Research estimates that the computer graphics market will dip 4.3 percent from $130.2 billion in 2017.

One of the reasons is that computer graphics hardware sales are also driven by sales of non-game computer graphics software, which is pretty flat at about $16.49 billion. That includes computer-aided design, modeling and animation, digital video, visualization simulation, and imaging.

“There’s a tremendous amount happening in computer graphics, but the top line doesn’t show that because the category is so broad,” said Jon Peddie, president of Jon Peddie Research and a longtime graphics expert, in an interview with GamesBeat. “It covers everything from computer simulations for bombs to special effects for movies. It’s hard to get your arms around it.” 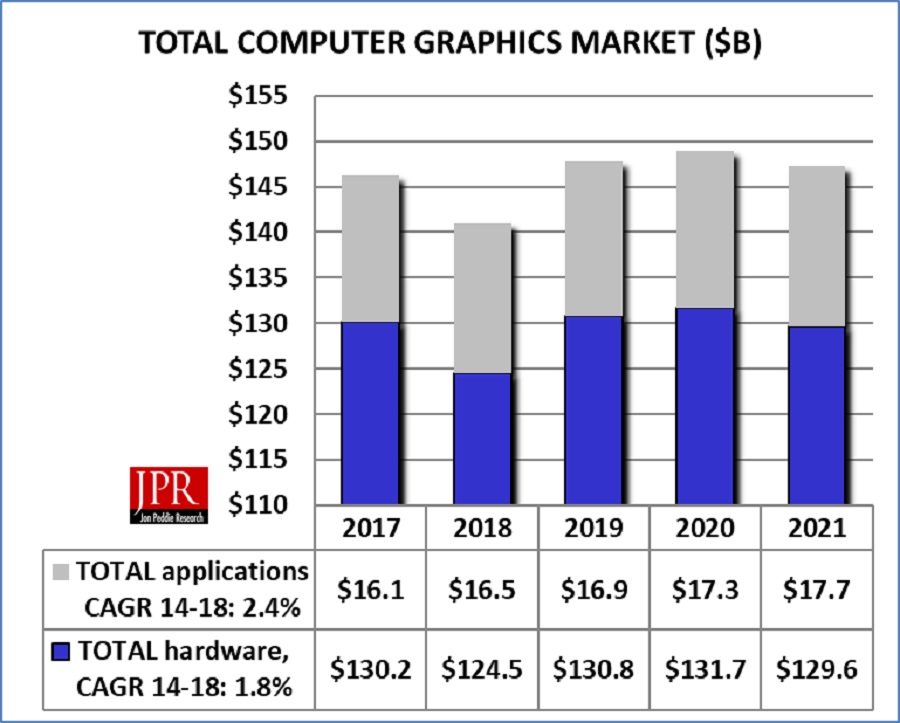 Above: The computer graphics market is pretty steady.

But parts of the market are definitely exciting, such as games. Game console sales are in a decline in 2018, as the PlayStation 4 and Xbox One are starting to near the end of a buying cycle, even as the Nintendo Switch is still growing strong. There’s also constant pricing pressure on hardware.

“Game developers have been able to reallocate their investment, accelerate game development, and bring out games across new platforms including the PC at the same time,” he said. “In the past, the PC was last and it got a crippled version built from the console game. Now PC games come out at maximum performance and that has led to a rise in sales on the PC.”

Another exciting part of the industry is the arrival, or near arrival, of real-time ray tracing. The industry has been trying to hit this holy grail since 1981, and at the upcoming Siggraph computer graphics show in Vancouver, a number of companies will show their version of the technology, which enables speedy and ultra-realistic imagery in games, Peddie said.

“Whereas the software aspects of the market have been slow to flat, the hardware segments have been varied, influenced by consumer products such as game consoles,” the report said. “Virtual reality, which has gained so much attention, is hardly a factor in either hardware or software, and despite some glowing forecasts, we don’t think it will be for a while. The main point of exploration for VR today is in content creation and design for professionals.”

By 2021, Jon Peddie Research estimates the computer graphics market will drop slightly from 2017 numbers to $129.6 billion, with software growing slightly better than hardware.

The hardware segment of the CG industry has seen steady overall growth, with some ups and downs due to product cycles and the irregularity of the PC market, the report said. The largest growth has been in game consoles, gaming PCs, and workstations, with the mobile graphics segment declining due to fewer units being sold and dropping average selling prices as the suppliers compete in a rapidly shifting market.

2017 did not see the introduction of new graphics processing units (GPUs) and add-in boards (AIBs), however, several new CPUs, and upgraded game consoles were introduced. This year, Nvidia and Advanced Micro Devices are both expected to launch new GPUs. 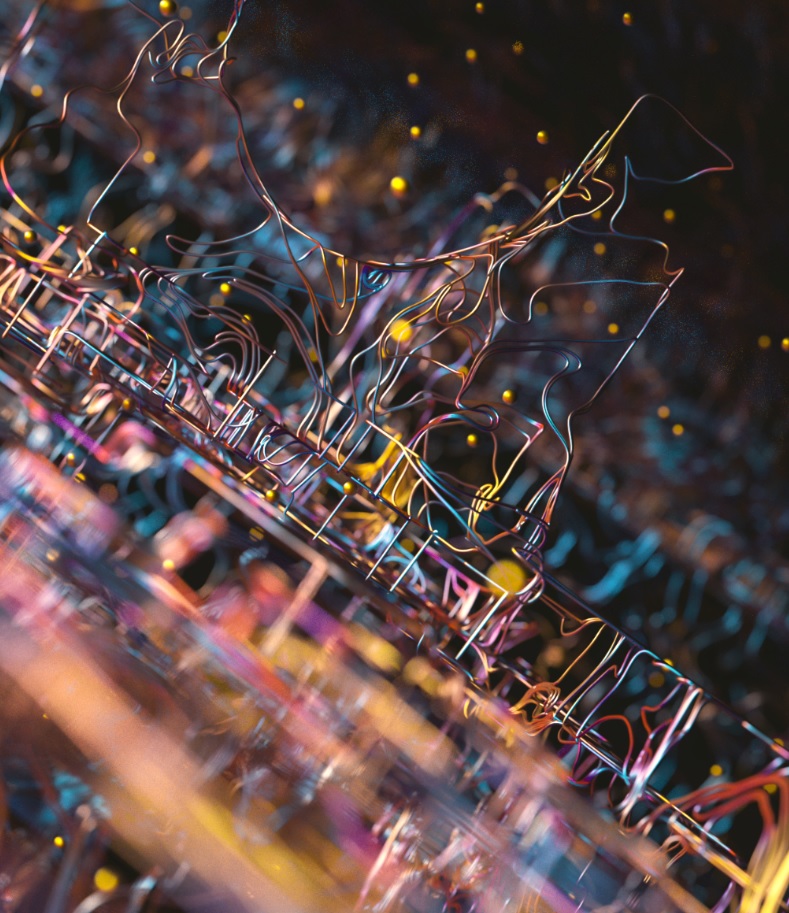 Above: Color Noise by Linus Zoll.

The market for CG software in 2017 was worth $16.1 billion (not counting services, maintenance and other aspects) and is expected to grow to $17.7 billion by 2021 as the industry shifts its sales model moving more services to the cloud, and transitioning to a subscriber system.

“The demand for programmers, artists, scientists, and designers continues to be strong and we’re seeing startups arrive in emerging and reborn markets such as augmented reality, virtual reality, and casual games,” the report said. “The arrival of new applications programming interfaces (APIs), and platforms are also stimulating development. Firms are actively looking for people who can use and exploit these new programs and their associated hardware accelerators.”

One of the mainstream opportunities is grown in social web and consumer applications, as social networks are encouraging people to use new tools that alter the graphics in pictures or animations.

“What used to be a very closed society of experts is now opening up due to the democratization of computer graphics, fueled by Moore’s law and price-elasticity due to lower software costs,” the report said. “We believe a new generation of content creators is being born. Video is rapidly replacing text as a form of communication and 3D is finding new outlets. Early examples include the Creative edition of Windows, Adobe’s Project Felix now known as Dimension CC, game engine tools such as Unreal and Unity, rendering programs galore.”

One of the new areas for software is cloud-based creation tools.

But Jon Peddie Research said they have been a “bit of a disappointment.” The report said, “Those designed to be easy are usually not easy enough and the results are unsatisfactory and professional tools are also not designed for the creatives, but for engineers. However, attractive pricing models are emerging, and the tools will adapt.”