While the gaming industry grossed over $108 billion globally in 2017, the digital gaming landscape in India was marked at $890 million which is roughly one percent of the global share. But the Indian gaming industry will develop rapidly to touch double digit growth in a year.

In the recently concluded CII’s International Conference on Indian Gaming Industry, the Minister of State for Electronics and IT said that “pegged at around $890 million, Indian gaming industry is projected to grow in double digits in next five years.”

India is ranked among the top five countries in terms of highest number of game downloads in the world. The number of game development companies have also increased tenfold to reach over 250 in last five years. If the current trends continue, Indian mobile games market will cross the billion dollar mark by 2020.

A significant reason behind this unprecedented jump in digital gaming in India is the rise in smartphone adoption among people over the past years and the increased internet penetration across the country. 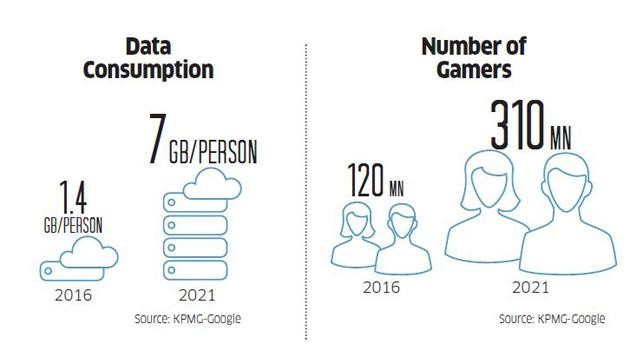 Above: Data consumption and number of gamers in India

By 2021, the average data consumption of Indian users is set to reach seven gigabytes per person, which was just above one GB per person in 2016 as reported by a national daily. Also, the number of gamers in India will cross 300 million by 2021. And, that’s a huge number of potential customers that are ready to consume games!

“Over 1 billion apps are downloaded from the Play Store by Indians every month. Such a large user base definitely opens up tremendous opportunity for games from all genres to do well,” says Karan Gambhir, head of business development, Google Play Apps & Games.

In 2017, the games that became the obsession of the country was Ludo King, an online multiplayer strategy-game based on traditional Indian board game called Ludo. It generated more than 10 million daily active users and still growing at a good pace. If we talk about the revenue, casino games like Teen Patti or Poker have been topping the charts on Google Play.

This year trends from Google Play Store rankings suggest that real-time player versus player games will be seen dominating the charts such as 8-Ball Pool and similar games. Indian gamers are seen to be more interested in free-to-play games as the number of downloads of free games are way higher than the paid ones. But, the difference is set to diminish faster with more rewarding games to enter the PlayStore.

Seeing the immense growth opportunities, industry leaders are putting their eggs in the baskets of Indian gaming companies.

Earlier this year in January, Paytm and AGTech Holdings (both backed by Alibaba Group) launched a gaming platform named Gamepind which aims to offer popular social games, casual games and sports games playing which the users can earn exclusive coupons and points.

In a very recent development, Halfbrick, the company behind popular game Jetpack Joyride (2011), partnered with Bengaluru-based games company Mech Mocha and launched exclusive India edition of their game, Jetpack Joyride, in April 2018. To attract Indian gamers, they have revamped the whole game with new design inspired by Rajasthan, Kerala etc and even cameo characters of Indian comedians are introduced in the game.

With advancement of technologies such virtual reality, augmented reality and artificial intelligence, the gaming industry will see major development in India.

Though VR and AR are more in global scene than in India because of the lack of access and availability of high-end gaming accessories. But with the rise in market share of Xbox, PS4 and other gaming consoles in India, VR games are sure to enter in the scene, augmented reality games have already had a good start in India.

The AR game Pokemon Go became instant hit in India with the country ranking 4th in the number of downloads. More such games like Harry Potter which got released  in April this year, and has seen immense acceptance from the Indian gamers to become No. 2 Top Grossing Adventure game in Google Play store.

With so much money moving in this Indian gaming industry, investors are definitely expecting exceptional results and return on investment. This, one hand has given gaming startups are space for rapid growth, while we can finally expect some amazing games being developed in India and going viral worldwide. Though there are some challenges involved, but in my opinion, there will not more right time to invest in Indian gaming industry than now.

Lalit Sharma is the co-founder of Vowelor and has been working in digital marketing landscape for last three years.