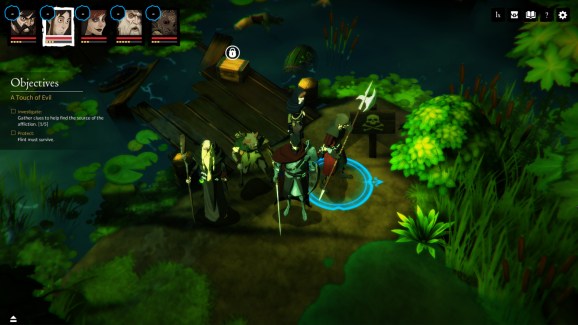 Just as the phrase “steampunk” might conjure up images of zeppelins and gaslamps, “candlepunk” evokes dingy dungeons filled with half-light. That’s where Sword Legacy: Omen lives — a world that re-imagines Arthurian legend and throws players into tactical battles. Developers Firecast Studios and Fableware Narrative Design have teamed up with publisher Team17 to launch their strategic role-playing game on August 13 on PC.

Sword Legacy stars Uther, King Arthur’s father, who is on a quest to reclaim the legendary sword Excalibur. Players will guide him and his scrappy crew through levels with various terrain and scattered with enemies. The characters each have different abilities, like lockpicking, and some can manipulate parts of the environment, like flammable barrels.

While a lot of games have explored the steampunk aesthetic, Sword Legacy is the only one to go for candlepunk, which Fableware narrative designer John Pine says takes its cues from medieval history rather than Victorian.

“We thought it was a good fit for our medieval world, especially the alchemical undertone we have. We have lots of potions in the game, and the potions always have side effects,” said Pine in a previous interview with GamesBeat.

Sword Legacy’s story unfolds in a grim fantasy world that has a dark graphic novel look and nefarious enchantments — the famed wizard Merlin is one of your party members, but rather than casting clean spells like a magic bolt or fireballs, he uses alchemy and blood magic.

Firecast Studios and Fableware Narrative Design view the game as their first step, and they’ve built out its world so that it might translate to sequels — or animated series and comic books. It’s a bold move to try to invoke a transmedia property out of entirely new IP, but the developers are hopeful that Sword Legacy’s stories are rich enough to support the idea.

Sword Legacy is the first Brazilian game Team17 has signed on, and it shows how the English publisher is keen to expand to new markets. Four months after it inked a deal with Firecast Studios and Fableware Narrative Design, it announced a partnership with the Chinese developer Pathea Games for its open-world RPG My Time at Portia.