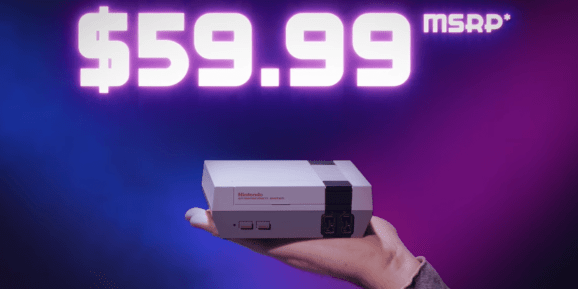 NES Classic is tiny, but people want it in a huge way.

June was a big month for the video game industry thanks to the Electronic Entertainment Expo trade show. That’s the event that is supposed to get people excited about the future of games … and then everyone went out and bought the Nintendo Entertainment System.

The NES Classic was the top-selling console in June in terms of unit sales, according to industry-tracking firm The NPD Group.

“This is the first time a Nintendo Entertainment System console has led in monthly unit sales since NPD tracking began in 1995,” NPD analyst Mat Piscatella said.

The resurgence of Nintendo’s mini-NES with 30 built-in games on the market helped reinvigorate hardware sales across the board to $350 million. That is up 52 percent compared to June 2017. But that doesn’t mean the PlayStation 4, Xbox One, and Nintendo Switch are slipping.

“All current-generation platforms delivered sales growth,” NPD analyst Mat Piscatella said. “Gains were driven by Fortnite, promotions around the E3 period, and reinvigorated distribution of the NES Classic, among other factors.”

In terms of dollar sales, the PlayStation 4 took June, but — as usual — everyone is seeing healthy growth.

Year-to-date, PlayStation 4 is still the best-selling console platform. As we pull out of summer and get games like the PS4 exclusive Spider-Man, that success should continue for Sony.