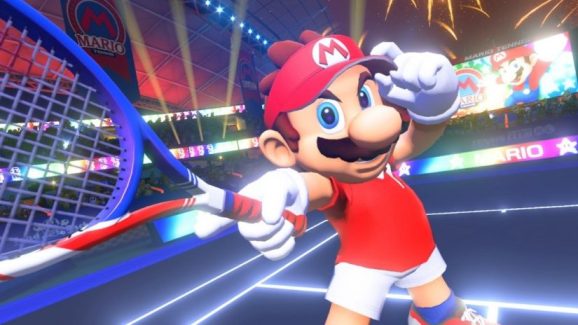 The games industry brought in $1.08 billion in June, up 25 percent year-over-year, according to the industry-tracking firm The NPD Group. Nintendo’s Mario Tennis Aces made quite a racket when it debuted on June 22, shooting up to become the best-selling title of the month. The popularity of multiplayer games like Epic’s Fortnite continued to contribute to high sales in the accessories category, which was up 38 percent.

“Year-to-date sales of both headsets and gamepads have achieved all-time record highs for a June tracking period,”  NPD analyst Mat Piscatella said. “The previous year-to-date high spending for headsets occurred in 2010, and for gamepads in 2016.”

Here are the numbers for June:

Here’s a look the sales charts. These numbers exclude digital sales from storefronts such as Blizzard’s Battle.net, as those publishers don’t release that information.

Nintendo won big as the month’s top publisher, even without The NPD Group tracking digital sales from its eShop. When Mario Tennis Aces debuted on June 22, it instantly set a record as Nintendo’s best-selling tennis game in terms of first-month sales and climbed to No. 1 on June’s best-sellers chart.

Warner Bros. Interactive Entertainment’s Lego Incredibles’s launch month sales were second only to 2016’s Lego Star Wars: The Force Awakens. The game got a boost by timing its June 15th launch to coincide with the debut of Pixar’s Incredibles 2 in theaters.

Santa Monica Studio’s God of War 2018 continues its reign at the top of the charts, sitting at No. 2 of June’s best-sellers as well as 2018’s top games overall. Action games have had a good year so far, and sales for titles in that category are up 30 percent year-to-date.

“Some super-genres are showing particularly strong year-to-date performance,” said Piscatella. “Sales of action games are up 30 percent on a year-to-date basis, while racing games, up 22 percent, and shooters, up 13 percent, are also experiencing double-digit percentage gains year-on-year.”

Piscatella says that racing games have been boosted by strong titles like Forza Motorsport 7, Gran Turismo Sport, and Need for Speed: Payback.

“These titles, along with continued strong performance of Mario Kart 8 and Rocket League, have pushed the racing super genre higher,” said Piscatella.

The NPD Group calls broad categories of games “super genres” — for instance, action is a super genre while stealth action is referred to simply as a genre.

Folks spent $350 million on hardware in June, thanks mainly to the battle royale sensation Fortnite. Sony’s PlayStation 4 was the best-selling console and remains the top platform year-to-date, but Microsoft and Nintendo also saw their sales increase. Year-over-year, Xbox One made almost twice and the Switch sold more than 50 percent. Nintendo also sold the most consoles with its NES Classic.

“This is the first time a Nintendo Entertainment System console has led in monthly unit sales since NPD tracking began in 1995,” said Piscatella.

The accessories and game card category grew 31 percent year-over-year, hitting $1.8 billion. Game cards hit all-time high sales, and accessories generated the most revenue since 2011. Like it did with hardware, Epic’s hit influenced headset sales, which was twice as high as June 2017 and up 86 percent year-to-date.