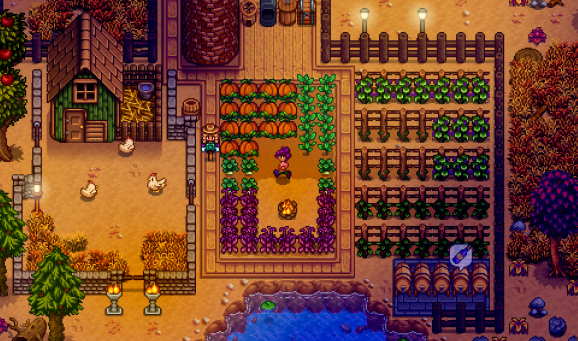 Stardew Valley enables you to play with friends.

Beloved farming simulator Stardew Valley is getting multiplayer support in its PC version. You can use services like GOG or Steam to connect with friends. You can also get together with your friends and play locally over LAN, and the idea of an all-night Stardew LAN party is the sweetest thing in the universe.

Major upgrades to a game like this enables developers to reward loyal players while giving potential new customers a reason to pick up the game for the first time. This is a common tactic for developers of all sizes, and it is one that has paid off in terms of sales and excitement among players. Stardew Valley has sold more than 3.5 million copies as of January.

Developer Chucklefish launched the update this morning. The multiplayer enables one person to start a world and other players to jump in and help them out. Your progress doesn’t count toward your own game if you are in a friend’s world, but you can still contribute and participate in all the in-world events that Stardew Valley is known for.

Other major changes to the game include the addition of hats for your horse, which is very important. My horse is a dandy gentlebeast, and he needs the accessories to prove it.

Many characters are also getting new interactions including new “heart” events for the lovers among you out there.

But my favorite change is this one: “You can now add Mayor Lewis’s shorts to the Luau soup.”

That soup is an early in-game event where you add an ingredient to a communal dish, and then Mayor Lewis tests the results. I’m sure he won’t appreciate finding his shorts in the dish.

While the multiplayer update is out now on PC, the console versions will get the update at some point in the future.