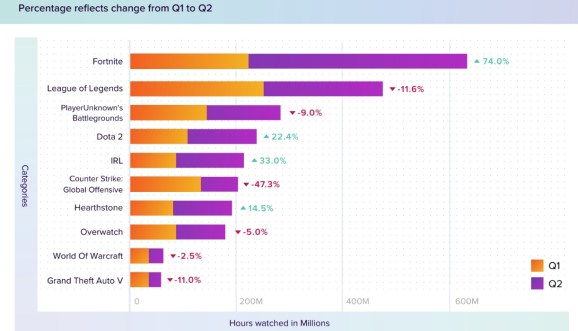 The enormously popular free-to-play battle royale shooter Fortnite crushed its rivals in the second quarter in terms of hours watched on livestreaming platform Twitch. Fortnite grew 74 percent in millions of hours watched on Twitch in Q2 compared to the previous quarter, according to a report released today by analytics and monetization platform StreamElements and SullyGnome.

On the other hand, a few other games gained in the quarter. Dota 2 rose 22.4 percent, In Real Life (which is simply people showing what they do in real life on a livestream) grew 33 percent, and Hearthstone grew 14.5 percent. Destiny 2 grew 214 percent, thanks to the Warmind release in May. 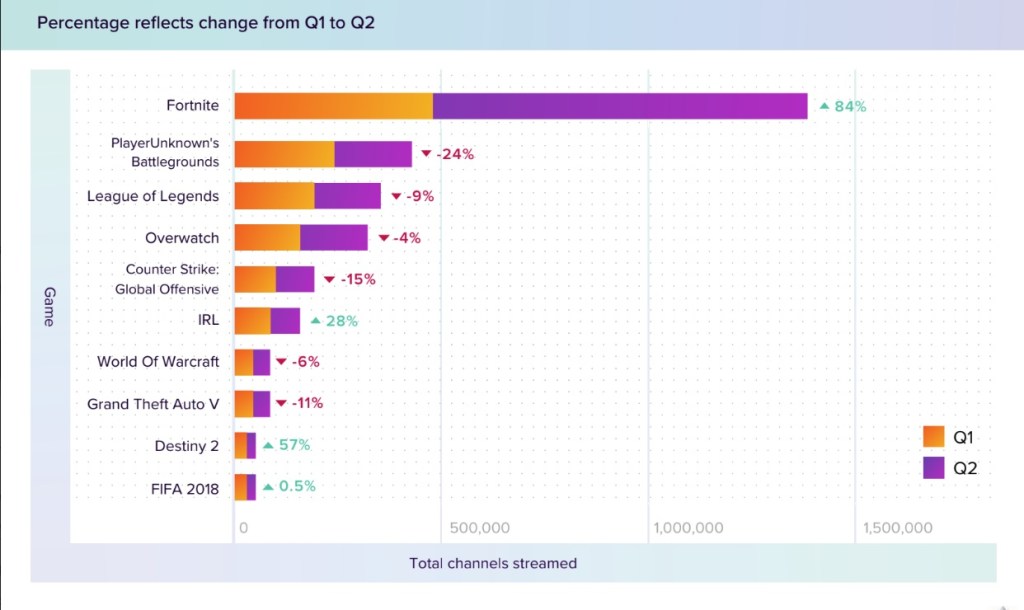 Above: StreamElements tracked the number of channels streaming big games in Q2 2018.

StreamElements said that there were 2.5 billion hours watched on the top 10 games in the quarter. About 630 million of those hours were dedicated to Fortnite.

In Real Life saw 44 million hours watched on streams in June. Twitch has a total of 111,721 IRL channels, up 28 percent in second quarter compared to the first quarter.

In terms of total channels streamed, Fortnite grew 84 percent in the second quarter compared to the first quarter, while PUBG fell 24 percent and League of Legends fell 9 percent.

Regarding methodology, StreamElements has their own internal data and also  worked closely with SullyGnome, which compared its data against StreamElements’ numbers. SullyGnome uses the Twitch API to collect the information every 15 minutes. The data is aggregated and presented on the site generally hourly or daily.