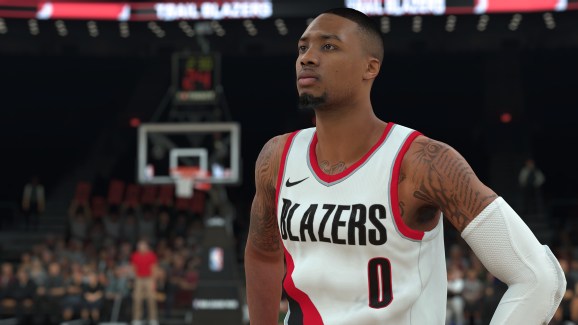 The well-inked Damian Lillard in NBA2K.

2K announced today that its basketball game NBA 2K18 has now sold over 10 million copies. This sets a new record for the near 20-year-old franchise.

NBA 2K18 launched on September 17, 2017 for PlayStation 4, Xbox One, Switch, PlayStation 3, Xbox 360, and PC. The NBA 2K series started in 1999 as a Sega game for the Dreamcast. Publisher Take-Two Interactive took over the series in 2005. The franchise has now sold over 80 million games. The series has received warm critical receptions, with the Xbox One version of NBA 2K18 having a Metacritic score of 85.

Sales for the series have grown with the rising popularity of basketball, which sank a bit in the post-Jordan, defense-heavy era of the early 2000s. Stars like LeBron James and Stephen Curry have helped make the NBA a worldwide success.

“NBA 2K18 is our highest-selling sports title ever, and a testament to the tireless hard work and innovation of the team at Visual Concepts,” said Strauss Zelnick, chief executive officer of Take-Two Interactive, in a press release sent to GamesBeat. “The ability to improve consistently upon an annual series and grow its audience reflects the team’s drive to remain on the leading-edge of pop culture and finding new and exciting ways to captivate and engage players.”

NBA 2K has competition from NBA Live, Electronic Arts annual basketball series. But while EA dominates football with Madden, NBA Live has struggled to compete against the NBA 2K juggernaut. NBA 2K is also expanding its esports efforts with the formation of the NBA 2K League, the first of its kind for a sports game.