Though it’s a ton of fun to leap through the air and web baddies, the thing I love most about Spider-Man is New York City. I lived in Brooklyn for eight or nine years, and no matter how many tacos I get to eat in my new home of Los Angeles, I still miss the Big Apple. So I couldn’t help but grin when I got to swing through Manhattan as Spidey at a recent hands-on demo.

Its hazy quality of evening light, the tiny crooked streets in Greenwich Village, the crowded alleys of Chinatown, and the gaudy lights of Times Square all made me nostalgic. Even if it wasn’t 100 percent identical, it felt accurate and added an extra thrill to the experience of being Spider-Man.

“We started from just a big gray box, designer gray box of Manhattan. We looked at, from a swinging angle, what’s the right distance for buildings to be apart, how high they need to be,” said Insomniac game director Ryan Smith in an interview with GamesBeat. “But we wanted to capture the feel of Manhattan, so we looked at all sorts of reference for how high things are, relatively. We also looked at spacing out landmarks, so they’re in the right positions. It’s not 1-to-1, but if you know where something is and you head north, you might hit the next thing you think of as a touch point. From there the art team did a ton of work. They were able to work with the designers to find the different districts — the Financial District, Hell’s Kitchen — and customize the art a bit in each district so it gave a unique feel.”

Smith says that the team also spent a lot of time on making sure the city had enough surfaces for players shoot their webs at so that slinging from building to building felt natural and easy. In addition to the standard controls for shooting a line and swinging, the developers also had to fill the streets with objects where Spidey could do special moves — like perching atop a streetlamp.

“The one great story is the fire escapes. Those have some special handling in the game, because — that was a moment of truth for us. We said, if we’re building these flat planes – it’s just designer geometry, right? – how do we make this feel like a real New York City?” said Smith. “Obviously you can have street lights and stuff like that, but there are so many fire escapes. We have to have them to make it feel real. So how do we keep our player moving through there so it feels natural, feels like an experienced Spider-Man? We actually have special moves for getting — if you hit it on the side, going over, going under. If you’re running up a wall, which you can do – you can just run into a wall while you’re swinging and keep your momentum going – we have a special sort of bounding animation that goes up over the fire escapes that way.”

I spent about four hours playing Spider-Man, and don’t worry, I wasn’t just running around trying to find all the pizza joints I used to frequent (L.A. has trash pizza — change my view). The demo showed off a decent chunk of story, offering up some of Peter Parker’s dilemmas as a foil to the action-packed boss fight from the Electronic Entertainment Expo’s demo in June.

With a great story comes a great game 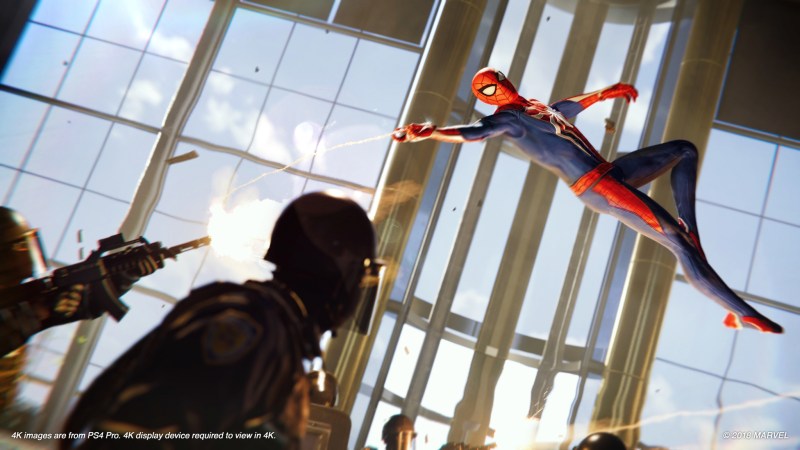 “I circled this one thing [Rosemann] said to me. He said, ‘The best Spider-Man stories are when Peter’s world and Spider-Man’s world collide,'” said Intihar. “That’s driven every single thing in this game. For us, to really deliver that true Spider-Man experience, it has to be as much of a Peter Parker story as it is about Spider-Man.”

The major themes of the game are mentorship and partnership, examining Peter’s relationship with the people around him. During the demo, I went to work, swung by a surprise party for Aunt May, and had an awkward conversation with Mary Jane “M.J.” Watson. The demo didn’t get too far into the story, but it set up all the pieces that will eventually converge. I could see which threads Insomniac could pull on later on down the line, including the high-stakes one with Peter’s mentor.

Spider-Man does a lot of things right — it captures Peter’s sense of humor, and combat is fast-paced and satisfying. Little touches make it immersive, like the social media panel when you switch over to check your stats and equipment. As you’re swinging through the skyscrapers, you’ll get phone calls from police buddy Yuri Watanabe or hear radio broadcasts from J. J. Jameson ranting away, as he’s wont to do.

“The thing that worked best for us was to have situational humor. Never try to force it, but when something happens, you can have that bit of comic relief where he can comment on it,” said Smith. “Sometimes that’ll be worked in to the level design or the cinematics. Sometimes we have systems that will trigger voiceovers when certain events happen in the game. And then we would look at it — there are various collectible systems and stuff like that. They have opportunities for a bit of storytelling that works that humor in. Talking about the backstory of his eight years as Spider-Man.”

The swinging is also a fantastic way to traverse the environment. Smith says that’s the first thing Insomniac worked on, tweaking the physics so that players are being thrown the right distance on release and figuring out how to give players a sense of speed. The camera was key to hammering home the “impact of your change in momentum.”

“Then there’s a lot of camera work as well that helps it be expressive. When you dive, the camera will look down. When you come out of that into a big swing, it goes with you in a way that you can feel. There’s even a little camera work on the turns so you can feel that,” said Smith. “Even our web-zip move, getting the camera right—that’s where you throw the web line forward and change your direction quickly — getting that to feel responsive and getting the visual effects, the camera work, even the rumble on the controller, getting that all together. Because we’re able to work with the New York City we built that is so realistic, you really feel that sense of speed when you’re close to a building. You have all these great scale cues that we built in.”

Occasional tangles in the web 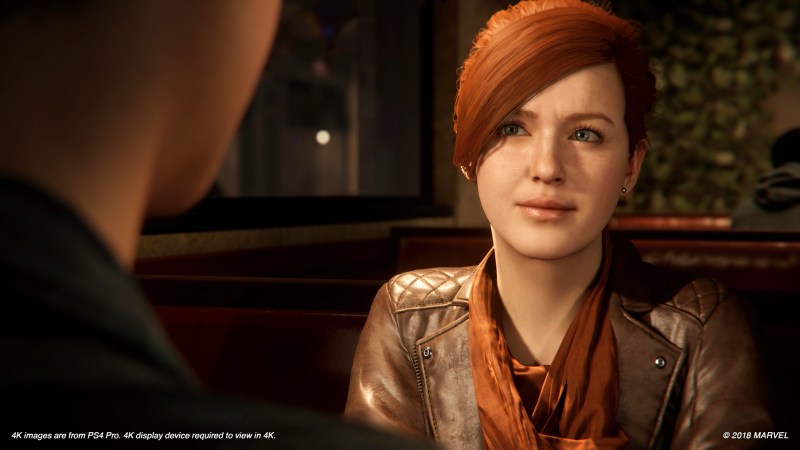 Above: M.J. is not convinced about some of Spidey’s life choices.

Not everything is perfect: Some of the non-playable characters had goofy dialogue, and I wasn’t a big fan of the minigames. Spider-Man has a few ways to earn experience points to level up or tokens to craft advanced gear. Some involve exploring the city, resurrecting radio towers in neighborhoods so you can tap into the police scanner and stop crimes in progress. Landmark tokens are based on taking pictures of famous spots around Manhattan, and you can find backpacks stashed in Peter’s old haunts.

Other tokens are based on minigames, like repairing circuitry or matching patterns in a spectograph. These have interesting character implications, because they lean into Peter’s day job as a scientist. But in practice, they’re a little repetitious. I’d be interested to see if they have a larger impact in the full release — for instance, I wonder if you can research more tech if you complete enough spectograph puzzles. The few that were in the demo, though, felt simply like busywork.

I’m also still not sure how I feel about playing as M.J. Her segment in the demo verged on dull. I mainly walked around an art gallery and examined objects before doing a little bit of stealth and puzzle-solving. However, she’s an important character, and I’m glad that she’s in the game — and Smith says that she has her own storyline. Playing as her reinforces the idea that she lives an independent life from Peter and that, while Spider-Man is the hero of the story, other people in the city are doing their part to stop villains.

Despite these quibbles, Spider-Man is incredibly fun. He’s one of my favorite superheroes, and Insomniac has done a standout job of translating his personality and the thrill of webslinging into a video game. The four hours I spent in the demo zipped by like they were nothing, and I’m looking forward to checking out the full game when it comes out.