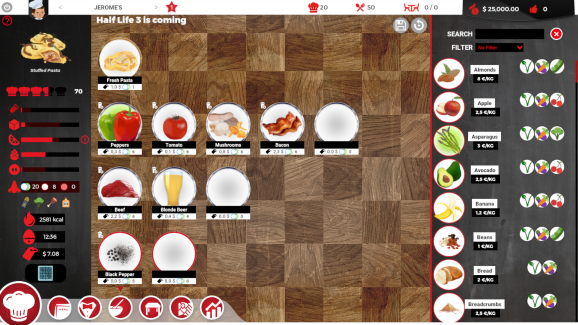 Culinary games like Ghost Town Games’ hectic co-op title Overcooked and Vertigo Gaming’s Cook, Serve, Delicious! series focus heavily on the timed element of the kitchen. Players must slice, sear, and serve up accurate dishes before orders expire. Innervoid Interactive’s Chef: A Restaurant Tycoon adds another flavor to the mix, enabling players to create their own recipes and test them out on diners. The game will arrive in Early Access on PC later this year.

Innervoid Interactive’s CEO Fabio Luigi Distefano says that the team has plenty of foodies, as well as a love for “deep, modern tycoon games.”

“We wanted to combine several of the best ideas from Pizza Tycoon and Restaurant Empire, but add more depth to the management aspects with further customization, the extensive use of tags, perks, specializations, avatar skills, etc.,” said Distefano in an email to GamesBeat. “On top of that, we wanted a whole new level of complexity with our in-depth recipe editor.”

Players can unlock abilities on six different skill trees in Chef. They can also run several restaurants at once. In addition to redecorating and expanding their domain, they can also customize the menu. Like in Cook, Serve, Delicious!, players can switch up items based on customer sentiment — though Chef has a whole Yelp-esque system built out that generates reviews from several types of diners.

“We have different customers with different expectations. For example, the gourmet pool is only interested in food quality, while the workers just want a fast service, to get back to work as soon as possible,” said Distefano. “They will make their reviews based on their personal expectations regarding food, pricing, service and atmosphere, and how well your restaurant performs on those. This is why you may end up wanting to specialize on a specific group of customers, because, like in real life, you can’t make everyone happy with the same formula.”

While other cooking games generally task players with following recipes, Chef enables folks to build their own dishes from templates. The system has over 30 templates, such as pasta dishes or grilled entrees, and players must balance flavors and aromas to ensure their creations get full marks from picky eaters. Distefano says the feature is inspired partly by the Innervoid team’s interest in food science.

“To roast the best meat you’ll need a perfect marinade, to cook the most creamy risotto you’ll need to add the right cheese to attain the highest evaluation,” he said. “As for the ingredients, each one is classified for both taste and aroma. You will need to balance the five basic tastes, in order not to have a dish come out too sour or too [fatty].”

Because Chef will be launching in Early Access, Distefano hopes that it will get plenty of feedback from its community. The studio is looking to learn more about what kind of features players want and test out the balancing between the game’s different features. It has also designed Chef so that it can be easily modded.

“I think food culture has entered a new renaissance ever since the first MasterChef, when food and pop culture first combined into a singular form of entertainment,” said Distefano. “Cooking is fulfilling, eating is even better. I mean, what’s better than daydreaming about tasting all those 3 stars dishes we see in the media? We’re looking forward to letting players create their own haute cuisine to salivate over.”