A few weeks ago, Discord updated its gaming-focused communication software with a new feature called the “games tab.” This is the new top option for the Discord home button, and it is one of the most useful updates I’ve ever seen for a piece of software.

I know that seems like I’m overstating things, but I mean it. The games tab is just a new page with a handful of sections. At the top, you get some news about some games. Below that, you get a quick launcher for some of your games. The third section shows you what your friends are playing right now, and then below that you get a game-by-game breakdown of everything that your friends have played recently.

Everything on this screen has a purpose, but the friend activity is what is changing the way I approach my gaming every night. With a quick glance at the games tab, I can get a brief rundown on what my friends are playing. That doesn’t seem like a big deal, I’m sure. After all, even Nintendo’s online service tells you who is online and what they’re playing, right? Well, Discord’s games tab is different because it doesn’t break that information down by individual players. Instead, it breaks activity down on a game-by-game basis.

This is so useful. If I want to see what GamesBeat reviews editor Mike Minotti is doing, I can go look him up on my friends list. But that doesn’t really help me know what most of my friends are playing. The games tab does provide that functionality. For example, glancing at it right now, I can see that a bunch of my friends were are playing Rainbow Six: Siege last night. 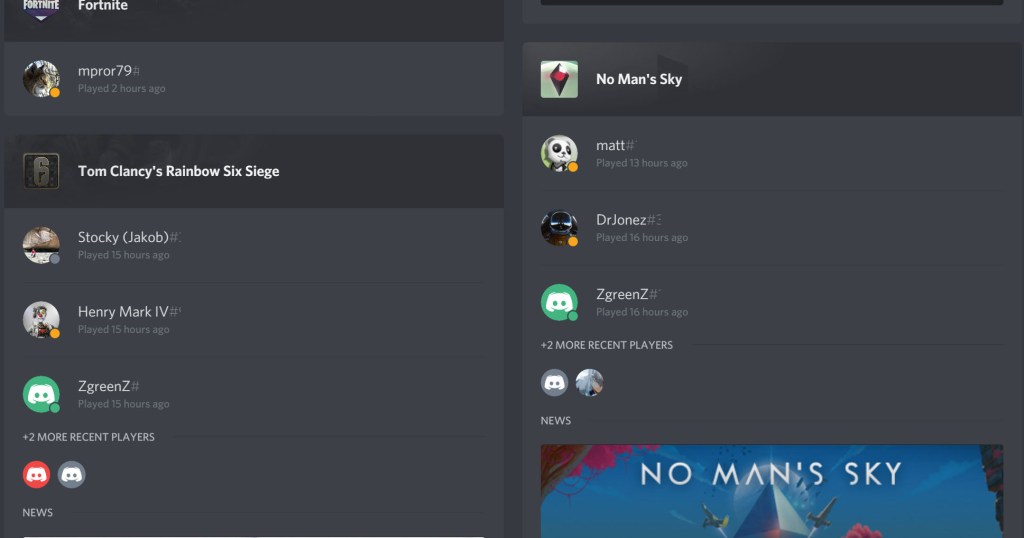 Above: Making it easy to see what games people want to play.

I was also busy all weekend, so I couldn’t play No Man’s Sky. I was thinking about playing some tonight, but I wasn’t sure if anyone else was still into it. I didn’t expect to get that answer without asking in our Discord server, but the games tab already had the answer for me. A bunch of people were playing around 12 hours ago, so maybe they’ll want together tonight as well.

I’ve also noticed that Discord only seems to include friend activity for people you communicate with regularly. All the people in this tab are those that I play with most frequently. So this is personalized data that I can use to plan how I play games. That’s unique in an industry that seems preoccupied with giving you new personalized ways to purchase games.

The games tab is also useful for keeping an eye on what people are interested in. If I see a new game I’m unfamiliar with that one or two people are into, it makes me more likely to check it out.

Finally, the games tab could loosen Steam’s grip on PC gaming. I start most of my evenings now by looking at this information to see what people are playing. I’m not even going to notice the platform they are using — whether that’s Steam, Origin, or whatever — and I can hit one button in Discord to launch the game as well without having to worry about finding the right front-end.

This is great for something like Call of Duty: Black Ops 4, which is heading to Blizzard’s Battle.net launcher only when it debuts in October. If most PC players are using Discord, they should see their friends in Call of Duty even if they don’t have Battle.net open at the moment.

Finding a way to cut Steam out without making players feel isolated is the first step in building a future where competitors can actually threaten Valve’s platform, and I think Discord is doing exactly that.