If you don’t have a Pixel phone, you won’t be getting Android Pie for a while (if at all). During the beta testing phase, Android P was made available on the Sony Xperia XZ2, Xiaomi Mi Mix 2S, Nokia 7 Plus, Oppo R15 Pro, Vivo X21, OnePlus 6, and Essential PH‑1. Google has shared that these devices, as well as all qualifying Android One devices, will receive Android Pie “by the end of this fall.” Google added that it is working with “a number of other partners to launch or upgrade devices to Android 9 this year.” Android Pie will not be coming to Nexus devices.

Google wants you to know that Android Pie includes a “heaping helping of artificial intelligence baked in to make your phone smarter, simpler, and more tailored to you.”

Android Pie offers of a slew of new features, including built-in support for display cutouts (read: notches), a tweaked Quick Settings panel, a notification drawer with rounded corners, messages in notifications when replying inline, smart replies in notifications, a consistent UI for fingerprint authentication, privacy enhancements to limit what apps can do in the background, Adaptive Battery and Adaptive Brightness features (courtesy of Google DeepMind), App Actions for predicting what the user will do next, App Slices for surfacing an app’s user interface inside the Google app’s search results and inside Google Assistant, a BiometricPrompt API for a system-managed dialog to prompt the user for any supported type of biometric authentication, and multi-camera APIs that let you access streams simultaneously from two or more physical cameras.

Adaptive Battery is particularly interesting, as it learns the apps you use most and prioritizes battery for them. It uses AI, as you might expect, as does Adaptive Brightness, which automatically adjusts the brightness of your screen based on your preferences and environment.

Google also offered examples for App Actions, which predicts what you’ll want to do next based on your context — “Say it’s Tuesday morning and you’re preparing for your commute: you’ll be suggested actions like navigating to work on Google Maps or resuming an audiobook with Google Play Books. And when you put in headphones after work, you may see options to call your mom or turn on your favorite Spotify playlist.”

App Slices, meanwhile, won’t be rolling out until “later this fall.” That feature shows relevant information from your favorite apps when you need it — if you start typing “Lyft” into Google Search, an app slice might appear showing prices for your ride home and the ETA for a driver.

Also coming this fall, to Pixel phones first and to other devices later this year, are Android Pie’s new Digital Wellbeing features. These include a new Dashboard that shows you how you’re spending time on your device; an App Timer that lets you set time limits on apps and grays out the icon on your home screen when the time is up; a new Do Not Disturb mode that silences all the visual interruptions that pop up on your screen; and Wind Down, which switches on Night Light and Do Not Disturb and fades the screen to grayscale before bedtime. If you have a Pixel phone, you can try Digital Wellbeing in beta.

Android Pie also introduces a new system navigation featuring a single home button (“borrowed” from Apple’s iPhone X). Swiping up from anywhere will show you full-screen previews of recently used apps, and you can tap to jump back into one of them. Smart Text Selection, which recognizes the meaning of the text you’re selecting and suggests relevant actions, now also works on the Overview of your recent apps.

The various privacy and security improvements are also worth highlighting. Android Pie introduces Android Protected Confirmation, StrongBox as a new KeyStore type, built-in support for DNS over TLS, Network Security Configuration that blocks all cleartext traffic by default, and expanded use of compiler-level mitigations, as well as restricted access to microphone, camera, and all SensorManager sensors from idle apps.

P is for Pie

Since Android 1.5, Google has named each version of its mobile operating system after a sweet food — moving sequentially through the letters of the alphabet. The tradition started more than eight years ago. Here are all the releases so far:

With Android 9, expect Google’s marketing team to use various pie idioms. Today’s announcement includes talk of the Slices feature and “pie slices,” mentions that security and privacy are “baked in,” talks about recipes, and of course notes that navigation is now “easy as pie.”

None of that will make much of an impact on Android version adoption, which remains slow. It took Android Oreo 10 months to pass the 10 percent adoption mark. The Android adoption order stands as follows: Nougat in first place, Marshmallow in second place, Lollipop in third, Oreo in fourth, KitKat in fifth, Jelly Bean in sixth, ICS in seventh, and Gingerbread in last. 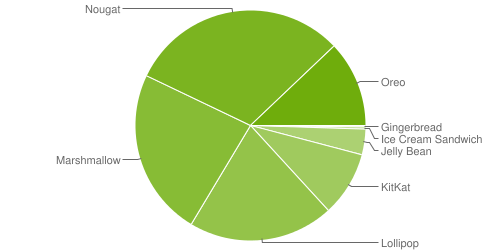