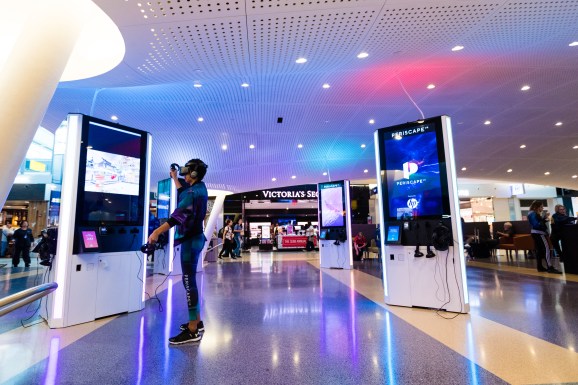 Virtual reality arrived at John F. Kennedy International Airport in New York City earlier this summer when PeriscapeVR set up 12 stations in Terminal 4. It’s the location-based company’s first installation, and it targeted the international terminal specifically to capture the attention of passengers who are whiling away the time between layovers. Around 750 people visit the Periscape VR Experience Center each day.

“I travel frequently and like most travelers, get stressed and bored,” said PeriscapeVR founder and CEO Lynn Rosenthal in an email to GamesBeat. “At airports, people can have three to four hours of dwell time. There’s not much to do. There were many times I wanted to escape into VR. Who doesn’t love being underwater with a whale, stunning jellyfish and sea anemones in TheBlu or the thrill of playing Beat Saber?”

Wevr’s TheBlu is one of the earlier successful VR experiences, whereas Beat Games’ Beat Saber is a fairly recent phenomenon. The latter — a studio formerly known as Hyperbolic Magnetism — is a rhythm game that sold over 100,000 copies in its first month and became an indie hit.

Periscape runs all its titles on the HP Windows Mixed Reality headset, which Rosenthal says they chose partly because of its technical specs and partly because of its convenience. The attendants can easily clean the head-mounted display’s face cushions and replace them when necessary. The staff also sanitize the controllers and the headphones.

At the moment, PeriscapeVR has a collection of eight VR experiences for its JFK booths. Many of these are games, like Beat Saber, Halfbrick Studios’ Fruit Ninja VR, and Owlchemy Labs’ Job Simulator, but its catalogue also includes the sculpting tool MasterpieceVR.

“At PeriscapeVR, we curate titles we believe will make travelers feel joyful,” said Rosenthal. “We’re catering to the VR curious, not gamers. There’s nothing like watching people experiencing VR for the first time.”