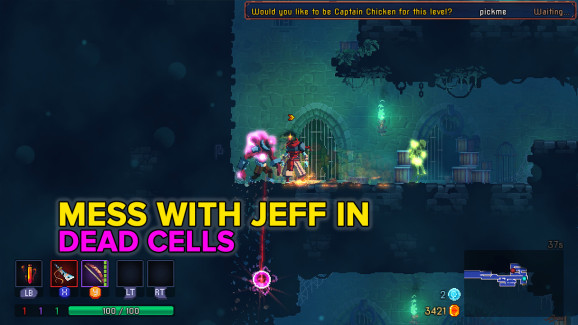 Be my Captain Chicken.

The new Metroidvania-style Roguelike action platformer Dead Cells from developer Motion Twin that is out today on PC and consoles comes with Twitch integration in its Steam version. In this “streaming mode,” your Twitch chat gets the power to affect the world of the game, and it creates a fun dynamic that makes for an entertaining Dead Cells broadcast.

I tried out the Twitch integration during a recent livestream, and it was fun to work with and against my chat. Dead Cells’ streaming mode enables chat to enter for a chance to become something of the player’s cooperative partner. Motion Twin calls this role “Captain Chicken,” and it decides when to heal the player. It can also send messages into the game for the player to see (so make sure you have your word filter on Twitch set up effectively).

Everyone else in chat, meanwhile, gets to vote on various perils or perks for the player. Between stages, your viewers can decide if you’ll have to face down extra enemies in the next level or if your Captain Chicken can help you with attacks. Chat can also help you open special chests by spamming certain words like “bam” or “pif.”

Chat also gets to vote on how your upgrade your character. When you find an upgrade codex, your viewers get to pick whether it goes toward Brutality, Tactics, or Survival, which are the three item classes. This enables you to pick up the codex and immediately get back to playing. This keeps the action moving, but it also gives you a chance to have a conversation with your viewers about how to build your character. I really appreciated the way the game gave my chat something to do, but giving us something to discuss that they have a stake in is even better.

Dead Cells is one of those games that people are going to pour dozens of hours into, and the streaming mode should give those players a fresh way to play it even after they’ve cashed the core experience.