Ghost Town Games is back in the kitchen with Overcooked 2, the followup to its award-winning couch co-op game. This time, the indie studio has partnered with publisher Team17, and its title debuted today on PC, PlayStation 4, Xbox One, and Nintendo Switch, which is the platform on which I played it.

If you loved Overcooked, then you’ll love the sequel — it’s much of the same chaotic culinary action, tasking up to four players to cook and serve up cakes, pizzas, and sushi within the allotted time. This time, the overarching premise is that our chefy heroes must save the Onion Kingdom from an attack by the Unbread, which yeastily rose from their graves via a cursed recipe in the Necro-nomnom-icon. It’s frantic fun, this time with new challenges and cuisines. 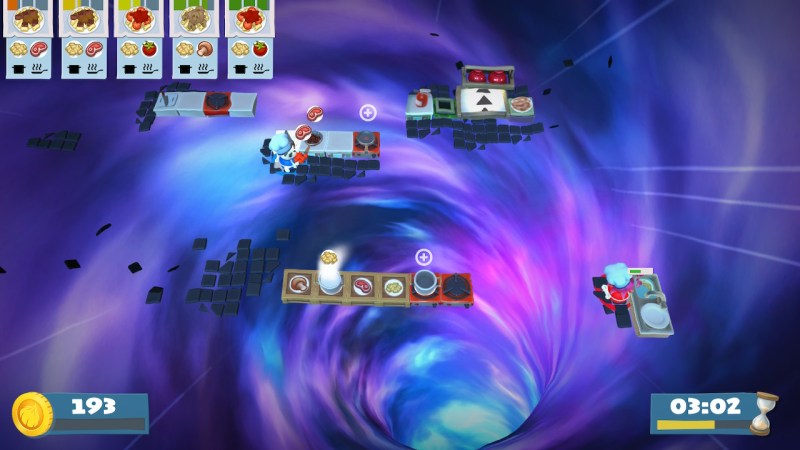 Above: What it’s like to attend a dinner party hosted by Lavos.

Overcooked 2 features six different areas, and each introduces new challenges and mechanics. Some of these make teamwork even more important — like split levels where you and your partners will have to move each other’s platforms so you can exchange ingredients. Other obstacles add timed elements, forcing you to dash across an archipelago to retrieve chocolate and eggs and dash back to your workstation before the bridge to the pantry sinks into an acid swamp.

Still others just make your life more difficult, like flames leaping out from a burner and blocking your path to certain areas of the kitchen. Your team might have to ferry items across a busy road between two kitchens, looking both ways to avoid oncoming traffic that can squish you and cause you to lose precious seconds. When you head east, you’ll encounter magical schools dotted with portals that you’ll have to use to access the pass or certain ingredients.

None of Overcooked 2’s levels were unduly frustrating, making the challenges even more fun to tackle. Some also get creative, such as one level that drops you out of a hot air balloon only to have you crash-land in a sushi restaurant. These puzzles were easily handled with two players, and I can only imagine the sheer chaos that emerges when you play with four. 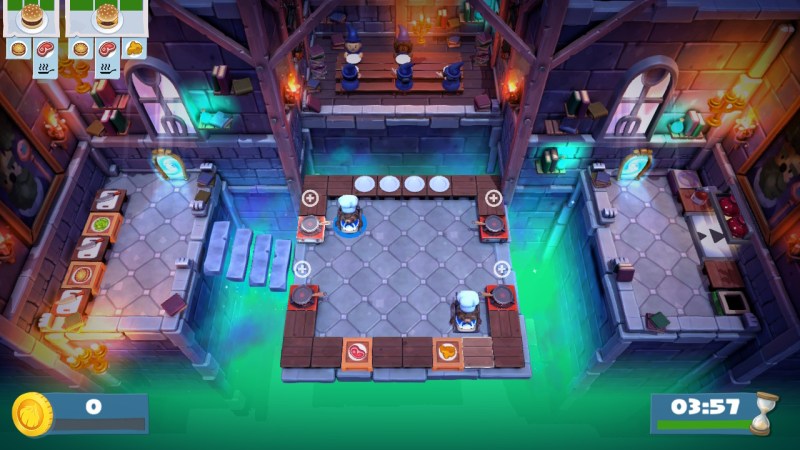 Above: In addition to grilling burgers, you’ll have to contend with disappearing staircases and portals.

Ghost Town and Team17 have introduced a menu that lists cheeseburgers alongside sushi and pancakes. Its kitchens are stocked with steamers, mixers, pizza ovens, conveyor belts, and deep fat fryers. If variety is the spice of life, then Overcooked 2 is a spicy game indeed. It also switches it up by combining different recipes in the same level — you might be grilling burgers in addition to assembling maki rolls, adding a bit of surf ‘n’ turf flavor to the pandemonium.

In the past, the studio has released DLCs that add more foods to the mix, and it will likely do the same for this title as well.

Whereas the first Overcooked only supported local multiplayer, its sequel enables online multiplayer. Its simple control scheme has relegated emoticons to one button, which contain simple expressions — like frustration, which I imagine online players may use often — and little status alerts that let your remote teammates know you’re washing the dishes. This is a great feature for folks whose friends live in other cities or countries, though if you can, the best way to play this culinary co-op is still on the couch.

Ghost Town has also added in new mechanics, like tossing raw ingredients, and Overcooked 2 features a versus mode and arcade mode.

When you have a half-finished dish, little icons float above it indicating which ingredients have already been added in. These interfered with visibility, especially in kitchens where you have limited counter space. I found these to be a little frustrating, though perhaps that’s the point.

Other than some icon mixups — I nearly served a cake with no flour — the user interface was streamlined and easy to read. 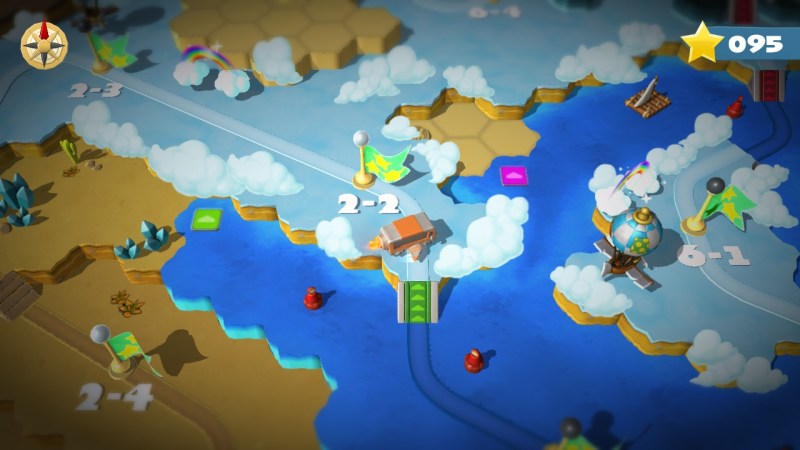 Above: Overcooked 2’s overworld map is adorable though a little circuitous.

I’m not crazy about Overcooked 2’s overworld map, adorable though it may be. It has a cute aesthetic, and I got a chuckle over how you can run over the Unbread with your trusty van. But in order to reach different areas, you occasionally have to hit switches to activate ramps, which felt unnecessary. These aren’t hidden behind any puzzles, so they mainly feel like inconveniences.

I also don’t like how you have to return to the castle after each completed chapter of the game, forcing you to spend a little extra time traversing the map before moving on. Fortunately, travel is fast and gives you a chance to eyeball the extra challenge levels that might be giving you guff.

Though I had a few minor quibbles over Overcooked 2’s garnishes, it’s overall a delectable followup. At times, I wondered why Ghost Town didn’t just release the new recipes and levels as DLC to its first title, but that doesn’t detract from the delightful new challenges and the convenience of new features like online co-op.

Overcooked 2 favors people who learn to work together. Many of the levels separate the players, forcing them to cooperate and share resources. It’s one of the most fantastic party games out there, one that reminds you that communication is part of the fun.

Overcooked 2 is out now on PC, PlayStation 4, and Xbox One and Nintendo Switch. The publisher sent us a digital code for this review.