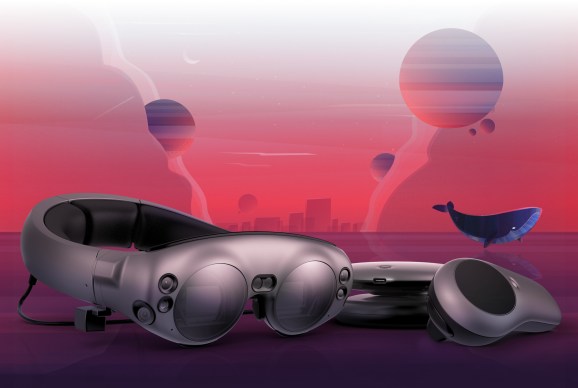 The initial verdicts are in regarding Magic Leap’s $2,295 augmented reality platform Magic Leap One: Expect a step rather than a leap forward from Microsoft’s HoloLens, thanks largely to fidgety first-generation hardware. While developers in six U.S. cities can order Magic Leap One today, testers are hinting that regular consumers may want to hold off until “ML2” or “ML3,” both of which are already being shown off to investors.

According to hands-on reports from several publications, Magic Leap One’s single biggest issue is its narrow field of view, a problem foreshadowed last week. CNBC described the digital content as “sort of like looking through a window within your field of view,” and said that it “can be hard to see objects that are really close to you or too big.” Similarly, Cnet called the small viewing area “a serious drawback,” saying that a user may require sound cues to “track where the augmented things are hiding, and where to turn.” Magic Leap told CNBC that subsequent hardware versions will “start to fix this problem.”

Another major issue for Magic Leap One is that the device is extremely dependent on a snug fit, and doesn’t work properly unless it’s custom-sized to each user. Wired noted that the handheld controller became non-responsive during testing due to a fit problem with the nose bridge, and realized that “these goggles will need to fit perfectly to work.” People with glasses will either need to wear contact lenses or have custom prescription lenses made for the headset, but the Cnet tester’s prescription was apparently too strong for that option, making contact lenses a necessity.

Fit issues are the reason, Cnet says, that Magic Leap is requiring developers to have a white glove delivery and personal fitting service provided by former Apple retail chief Ron Johnson’s company Enjoy. “They will come to your home, office or someplace else you choose in a few hours or few days, depending on the city,” Cnet says, and personalize the headset.

This tweaking is necessary because of Magic Leap’s proprietary light field displays — lens-optimized screens designed to more closely mimic reality — which the company plans to self-manufacture in Florida. The manufacturing process apparently still isn’t ready for mass production, however, so a contract manufacturer is making the parts for the Magic Leap One.

Each of the testers referred to Magic Leap One’s visuals as ghostly, though not in an entirely negative way. “Images floated and displayed well,” said Cnet, “creating a sense of impressive depth, but their sense of reality always bordered on the video game side, like a Disney cartoon.” Magic Leap is aware of the current system’s limits: CEO Rony Abovitz said that “ML1 gives you, I’d say, the beginning of real usability.”

Since today’s announcement was focused on Magic Leap One’s availability, it’s interesting that the company is openly discussing future Magic Leap products, and noting that hundreds of people are actively working on them. “The company is already showing investors and partners prototypes of its smaller (and hopefully less expensive) Magic Leap Two and Magic Leap Three,” said Cnet, “but won’t say when they’ll be released.” These prototypes are said to be “under a cloth” in an “Apple Store-like product display room.” A red-colored Magic Leap “special edition” variant is also in the works.

It’s clear from the hands-ons that Magic Leap will continue to face significant development, marketing, and pricing challenges. Eight years have passed since the company’s founding, and it’s just beginning to ship hardware that testers are saying “isn’t quite there yet,” at a price point 10 times higher than average consumers would pay for the technology. The goal now is apparently to convince creative types to create content that will convince people to buy devices.

Wired says that Magic Leap is now trying to “remake itself as an ordinary company” and get past the hype it previously created. Former marketing chief Brian Wallace told Wired that he knew that what the company “was directing us to say publicly was not going to converge with the realities of the product when it launched,” and left in 2016. Just yesterday, Magic Leap confirmed that the head of its “go to market” strategy Jeff Gattis just left the company as well.

Even so, Magic Leap has billions of dollars in investments from major tech companies, and says that its earliest hardware shipments before today went out to game and entertainment developers (40 percent), corporate communications developers, and health care developers. The question now is whether there will actually be customers willing to buy the platform required to use Magic Leap-specific games and apps.