Path of Exile‘s upcoming Challenge League is about to supersize the megadungeon.

Delve launches on PC August 31 in an infinite dungeon, an adventuring complex without end. You roll up a new character and head into the Azurite Mine, and as you explore, you find that the darkness is full of dangers. But if you stick with your trusty bulldozer-like Crawler, which shines a light to penetrate the dark veil, you’re safe. But hanging out beyond the glow of your rolling companion are treasures beyond compare — so you can also use some flares to extend the protection … and to unveil the new Azurite resource.

Path of Exile has been a success for Grinding Gear Games. The online take on Diablo’s loot-based action-RPG continues to grow since its 2013 debut on PC. The studio said that June’s Incursion Challenge League was its most successful expansion to date, reaching 145,690 peak concurrent players on Western servers (this doesn’t count China or the rest of Asia), and the previous update saw a big boost, too.

This is part of why Tencent bought a majority stake in Grinding Gear in May.

“This continues Path of Exile’s trend of 50 percent year-on-year growth since 2015,” the studio said. Games use such expansions to re-engage players and bring in new people, and Grinding Gear clearly accomplishes this every time.

And the very nature of the Challenge Leagues make them appealing to engaged and lapsed players alike. You start a new character, and within 10 minutes, you can take on the challenges, so you don’t have to worry about coming in fresh or after not playing for a few months. And if you have friends who play, you can compare runs into this dungeon to see who gets further. Grinding Gear Games managing director Chris Wilson told me that Path of Exile could generate a mine with levels in the five figures, but they don’t expect people to even crack level 1,000.

The idea of an infinite dungeon is something players have asked for before. I adore them. I put far too much time in Dungeon Hack and the Neverwinter Nights: Infinite Dungeons module. I asked Wilson why this was coming as a Challenge League expansion instead of a permanent offering, and he said Grinding Gear worried players would enjoy a never-ending delve so much that they’d never come out and play the story portion of the game.

Diving into The Delve

The Azurite Mine asks a simple question: Are you afraid of the dark? In the dungeon, darkness deals out damage, and it turns lethal within a short time span. So, this is why Niko the Mad, who’s sending you into the mine to find Voltaxic Sulphite so he can make things with it, forged the Crawler. This little machine reminds me of a farm tractor from the early 1900s, but it’s your lifeline in the mine. It creates a circle of light that holds off the darkness, and it lays a line that links Delves as you travel. Sure, you can stick to this area, fight monsters, and find loot, but the best treasures are outside the protection. 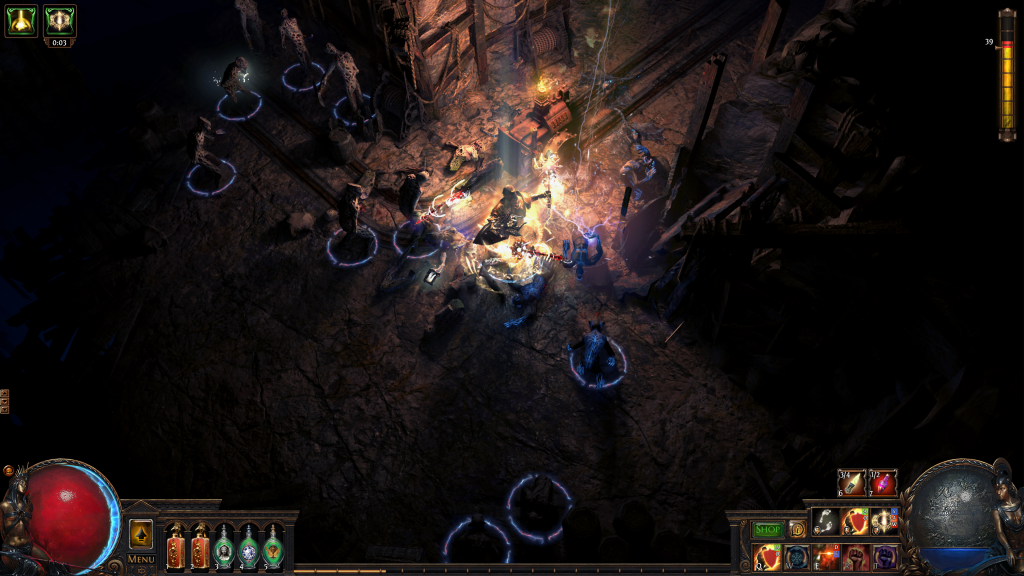 Above: The Crawler is your best friend in The Delve.

You can use flares, too. These create small areas of light when you toss them, and this is one way you can step away from the Crawler and find the lux loot in safety. You can also toss these as weapons — something Wilson said Grinding Gear added later on as playtesters kept asking and trying to use them in an offensive capacity.

But some of the monsters can snuff your candle, so to speak. They can use an EMP-like ability to prevent the Crawler from shining its light. This is another reason to stock up on flares.

When you find some Voltaxic Sulphite, you click on it, and Niko appears. He mines it for you. You can store a limited amount, so you use it on exploring The Delve further. This is how you get the new Azurite resource, which upgrades the Crawler, your flares, and dynamite (a new item that blows up walls, unveiling secrets areas that may have more loot).

Secret areas and rooms are a key component of megadungeons, so adding this mechanic made sense, Wilson said.

At the end of each Delve, Wilson said you often face a big encounter with waves of monsters and bosses. You’ll get a reward for beating this challenge. Then, the areas become connected, and the Crawler drops any items it picked up along the way (it can gather loot, too!).

Azurite does more than just power your flares and dynamite. You can use it to upgrade how much Voltaxic Sulphite you can carry, your resistance to darkness, or the radius of your light from the Crawler. You can also use it to make your dynamite and flares more powerful … or buy more of them.

Delve also changes crafting with Fossils and Socketable Crafting Items. And these, Wilson said, give you more control over the modifiers that appear on weapons. Wilson then directed me to an image showing how a Metallic Fossil boosts your chance of getting Lightning Mods, adds more to the pool of available mods, and prevents Physical Damage mods from appearing. Wilson went on to show how, when placed in an Alchemical Resonator, it crafts lightning weapons. 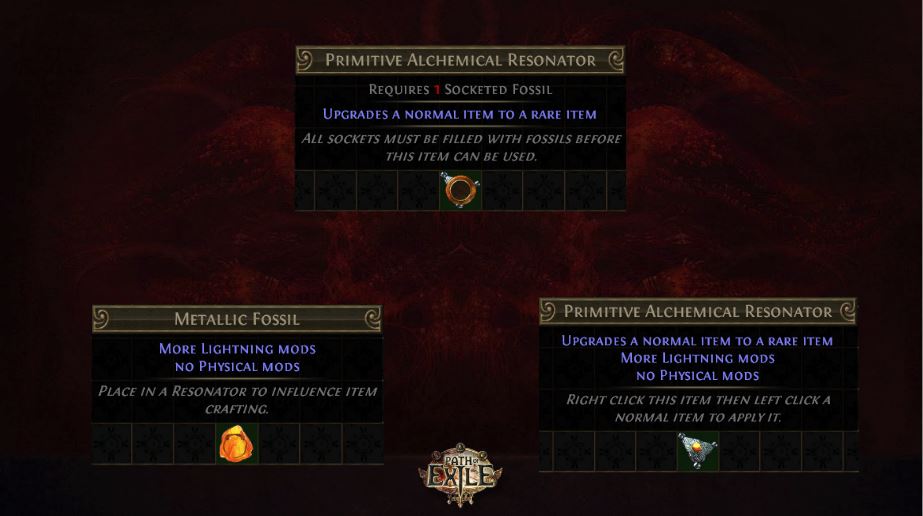 Above: Using a Fossil on your items to get what you want. 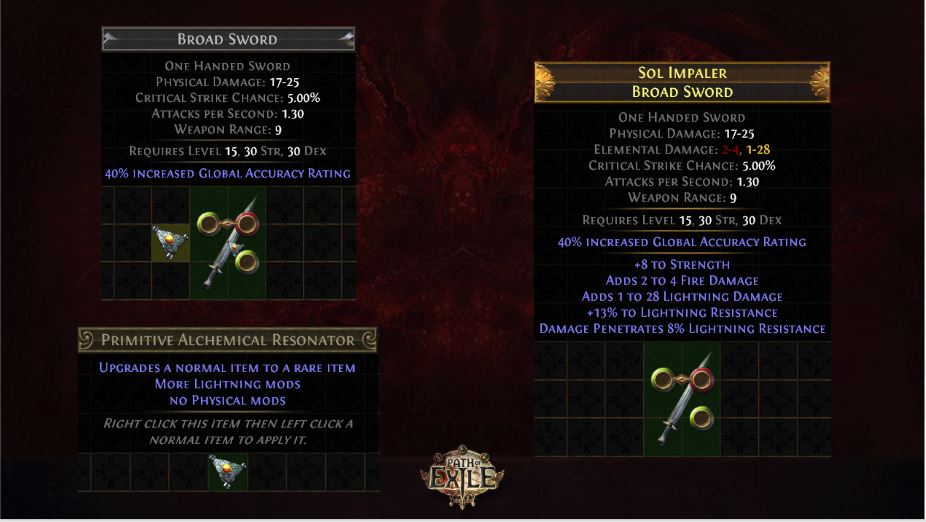 Above: And the result.

You can also use Fossils to get more sockets on Resonator, too.

A more skillful you

Wilson notes that Delve is also addressing skills, revamping some and introducing others. The hope is to create some new, powerful character builds.

He points to the new skill Smite. Grinding Gear intends this for the Guardian, a Templar subclass with strong melee attacks and abilities that help teammates. Smite hits an enemy and then generates a lighting bolt that strikes another nearby foe, dealing area-of-effect damage as well. It also adds an aura that gives the Guardian and companions additional lightning damage and a chance to shock a foe. 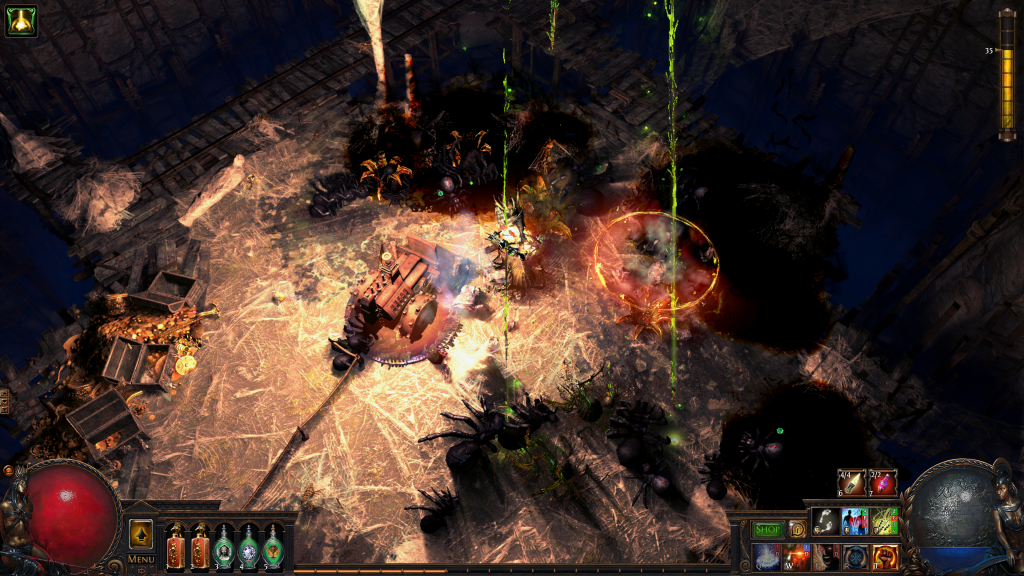 Above: Bathing in the Toxic Rain!

Another new skill is Toxic Rain, which is a bow skill for the Chaos Pathfinder. This creates a rain of spore pods, which lash themselves to nearby foes. This slows them down and deals chaos damage until the pods explode.

Path of Exile will bring some visual improvements with Delve, too. It now supports shadowed illumination (using global illumination and ambient occlusion), and this should make the new infinite dungeon and all other areas look more striking.

Water is getting physical simulation as well. Water has foam and eddies, and it changes speeds as it flows. Wilson said that larger rivers and such will travel slower, and as the watercourse thins, the water gets faster. It also slows and bubbles around objects.

Older monsters are also getting a makeover to bring them up to the more modern specs of recent Path of Exile releases.