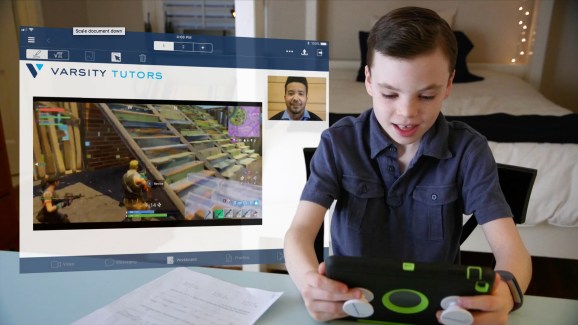 As Fortnite‘s popularity continues to rise, some players are trying to get ahead by hiring coaches. Varsity Tutors, a service and platform that offers remote teaching, has seen a swell of demand for Epic Games’ battle royale shooter sensation.

It’s not the first game on Varsity Tutor’s platform. CEO Chuck Cohn says that, prior to the Fortnite frenzy, Microsoft’s Minecraft drove demand. The service has around 40,000 tutors who cover over 1,000 subjects such as standardized test prep, languages, traditional academic subjects, and, increasingly, games.

“Usually what we do is, when we see a spike in demand for a given subject or topic, we then ping our user base of tutors and see if we can find somebody that is already an expert on the platform, who already has gone through a rigorous interview process and demonstrated their communication skills and passed a background check and already worked with students and demonstrated success,” said Cohn in a phone call with GamesBeat. “In this case, the Fortnite demand kind of came out of nowhere. It was small and growing, and then over the course of the last two weeks or so we’ve seen an astronomical spike in volume that was frankly unanticipated.”

Fortnite has 125 million players and is the most popular game on the livestreaming platform Twitch. Within five months of debuting on iOS devices, it passed 100 million downloads and has generated $160 million in revenue despite being free to play. Developer Epic Games is making a big push on the esports scene as well, devoting $100 million to tournaments.

The esports segment of the market continues to grow, and it’s slated to hit $906 million this year and $1.65 billion by 2021. Some services were already offering one-on-one video game tutoring before the Fortnite boom, like Superprof, which launched in 2013 and has tutors who hawk lessons for competitive games like Counter-Strike: Global Offensive and Overwatch, along with myriad other titles like Diablo 3 and World of Warcraft. Other services like Gamer Sensei specialize in Fortnite tutoring.

Joseph Armienti is one of the Fortnite tutors on Varsity. He’s a teacher at Actors for Autism, a nonprofit organization that helps students on the autism spectrum learn skills pertaining to industries like film, animation, and video games. He’s one of the instructors for the latter category at AFA, and he also develops games as part of Press A Studios. In addition to his professional experience, he also logs up to 20 hours on Fortnite per week.

Though Armienti normally accesses his students in the classroom, tutoring Fortnite through the Varsity platform is remote. Teaching someone long-distance can be challenging, but he says that this is alleviated by how he can jump into a game with them and explain different strategies. It also helps that Fortnite enables cross-platform play — it’s available on PC, Xbox One, Nintendo Switch, and iOS with an Android version on the way. Students using a PlayStation 4 are out of luck, but he can play with most of the folks he teaches no matter what device they’re on.

Armienti is working on a formal curriculum, but so far his lesson plans have covered topics like how to build as well as how to keep up with the game’s meta, like which weapons are popular. He encourages his students to try new equipment and tactics and to observe what kind of players they might be up against. He also utilizes his game developer background, explaining how the geometry of the environment or the mechanics can affect gameplay.

“One thing that I want to go over with my students is memorization,” said Armienti in a phone call with GamesBeat. “Learning where things are in the map is actually very key to playing. And especially doing that in playground mode, because in playground mode you can see where everything spawns. Then you’ll have a better chance of finding those things again when you’re playing in the real deal.”

The students who sign up for Fortnite tutoring come from all backgrounds — beginners as well as mid-level players who are trying to improve their stats. Some want to become full-time broadcasters on platforms like Twitch or YouTube. Others are there at the behest of parents who are recognizing that games can actually lead to college scholarships.

“Some students are actually parents that are trying to bond with their kids. It’s funny. The kids are worried that their parents are going to get better than they are,” said Armienti. “Popularity in school is coming into this. It’s actually a very real thing, where kids are like, if you’re good at the game then you can be popular at school. If you’re bad at the game, you might get bullied at school. It’s every walk of life. Some kids are on it for the popularity aspect. Some kids just want to be better at the game.”

More games tutoring in the future

Cohn says that Varsity has received 10 times as many requests for video game tutoring in the last month, and for Fortnite alone, they receive around 500 to 1,000 requests from potential clients every day. Its platform has a number of tools built in for traditional subjects — like embedded video chatting, as well as a white board and document editor, which enable tutors to draw and show real-time text edits on students’ work. Games are a little out of this workflow, but Varsity’s teachers are finding workarounds. Some, like Armienti, might jump into a game with students. Others ask students to stream or record their gameplay and then they review this footage with the students over video chat.

“We have not yet built all the tooling necessary that you would probably want in an ideal situation long-term [for games], and right now we’re using the platform kind of as it exists today, with the recognition that the demand seems to be there and it makes sense to invest product resources there long term,” said Cohn.

Varsity Tutors’ pricing is on average around $45 or $55 per hour, depending on which package customers select. People can order a bundle of hours in advance, and then use that time on any of the subjects on the platform. The company is also exploring more affordable options by experimenting with virtual classrooms with multiple students, which it’s already rolled out with its test prep subjects.

Cohn says that the company’s overall goal is to making learning “approachable.” This reflects in the way it’s designed its tools and its recruiting process.

“Very often people are intimidated by learning a new skill, because of the environment in which they learn. If, for example, in your AP computer science class there’s 19 boys and one girl, that one girl may be intimidated by the situation,” said Cohn. “Creating a platform that’s highly approachable, that makes it really easy to learn in a fun, low stress environment, we think that creates a support infrastructure that makes learning any subject more accessible. Internally we have all sorts of diversity recruiting initiatives, particularly related to engineering and tech.”

So far, Armienti says that all his students are male but he’s looking forward to welcoming more diversity in the virtual classroom.

“You don’t see as many women in the esports community as you do men. The whole video game industry itself is very male-dominated. It’s very refreshing seeing women and other people joining this community and being a big part of it,” said Armienti. “I personally I haven’t had any girl students yet, but I’m looking forward to it. I’m sure that they’re going to be just as great as the boys are.”