Outward is an ambitious, open-world RPG designed by a team that’s a third of the size you’d expect. It’s dynamic, systems-heavy, and you can play the whole thing cooperatively and in splitscreen. Only 10 people are designing it. According to Nine Dots Studio founder Guillaume Boucher-Vidal, it’s exactly the right number, and even amid the pressure of getting it ready for release, the studio always manages to avoid crunch.

“I’ve always been against working hard,” he says. “I’m for working smart.”

Nine Dots hasn’t been immune to the problems that plague lots of indie developers. The day their last game, God Factory, launched, they ran out of money. Despite a positive critical reception, the multiplayer space dogfighter never quite got going, and the studio had to quickly start work on its next project.

“Even though it was really stressful financially, even though we were always in a live or die situation, we never crunched,” explains Boucher-Vidal. “That’s something that’s really important to me. We always have some semblance of a work-life balance. The only exception is myself. I’m the lead designer, I’m the CEO, I’m doing HR, I’m doing admin, I’m doing marketing. I was doing too much. But when I say I crunched, I crunched for a few weeks at a time around events. And to me it was always a failure, if it came to that, rather than a point of pride.”

Nine Dots plans everything down to the number of enemies, and for every job, the time scale is always conservative. If something seems like it will take three or four weeks, the team plans for six. The small size of the team has kept it agile, too, letting it quickly make adjustments so that developers don’t feel like they’ve stopped being productive when they hit a problem.

There have been times where scaling back has been necessary, but Outward remains a dense game designed to be approached from all sorts of different directions. You can be a hunter living off the land, a mage working for a religious group that worships a living god, or a gun-toting rebel. There are paths you’ll only see with a new character, but they’re all tied together in a storyline that becomes more cohesive the more perspectives you experience.

“One hero usually just does everything, saving his neighbor’s cat while also saving the world, and that’s not what we wanted to do,” says Boucher-Vidal. “So we’ve got three different storylines, and they’re all a different perspective on a much bigger conflict. You get to understand what’s happening only once you’ve gone through all three storylines because you can’t do everything at once.”

All three stories run in parallel, and the world moves forward even if you just want to ignore the narrative for a bit and delve into a dungeon. Quests have timers, though they’re often months long, and they can be failed. You’ve got a schedule to keep, but Boucher-Vidal warns that Outward will throw a lot of diversions in your way, whether it’s crafting, a dungeon misadventure, or the unfortunate outcome of a battle with some scaley enemies.

“Let’s say you’re fighting some lizards and they defeat you. You might wake up in their lair, left for dead, your maximum health is down, you’re bleeding, you don’t know where you are, and it’s dark. Sometimes one defeat scenario can lead to another, but if you survive, it’s a story to tell.”

When a fight goes badly, you may very well end up dead, but defeat scenarios provide an interesting alternative to loading up your last save. Divine intervention might bring you back to life, even empowering you for a short time; you might be dragged off to a monster’s cave, a treat to be nibbled on later; or you could become a slave, forced to work in a bandit-run mine until you can plan your escape. Defeat is almost certainly inevitable. Even though this is an RPG with magic and meddling gods, you’re still just a regular, squishy human. You don’t even have a fancy destiny to ensure that things will work out nicely in the end. You might end up being responsible for the deaths of countless people, and you’ll probably end up battered and bruised a few times. Fights aren’t just something you dive into.

Rest, food, potions, weapon varnishes—there are countless ways to prepare for a fight, and sometimes that will be the only way to get through them. Different monsters require different tools and tricks if they’re to be taken down. How you prepare for battle also differs depending on the skills of your character.

As a fighter, you might want to eat a lot of alpha predator meat before a battle to get your blood pumping and your rage up, while a mage has a whole different set of rituals and tasks in front of them. Outward’s magic system is extremely involved, with spells being broken down into steps, mixing a bit of science and crafting in with the magic.

“In most games, to throw a fireball, you press one button and throw a fireball,” says Boucher-Vidal. “That feels like firing a gun, not like casting magic.” To throw a fireball in Outward, you have to find a mana stone, use alchemy to infuse it with fire, use the crystal you just made to place a fire sigil on the ground, stand in the sigil, and create a spark. When the spark reacts to the sigil, you’ve got yourself a toasty fireball.

“It feels like you’re doing a ritual,” says Boucher-Vidal. “It sounds like a lot of steps, but the mining or buying of mana stones and infusing them with fire are two things you can do earlier. While you’re at camp, you put down your alchemy set, prepare a few things for the future, and then you’re ready to go.”

Characters don’t start off with any magical aptitude. To even unlock the mana bar, a trip to a leyline must first be made. There, a portion of health has to be sacrificed, with the size of the mana pool correlating to how much is given up. This way, a warrior who just wants enough mana to cast one very specific spell can just lose a tiny portion of their health but get a powerful new skill for their loadout. 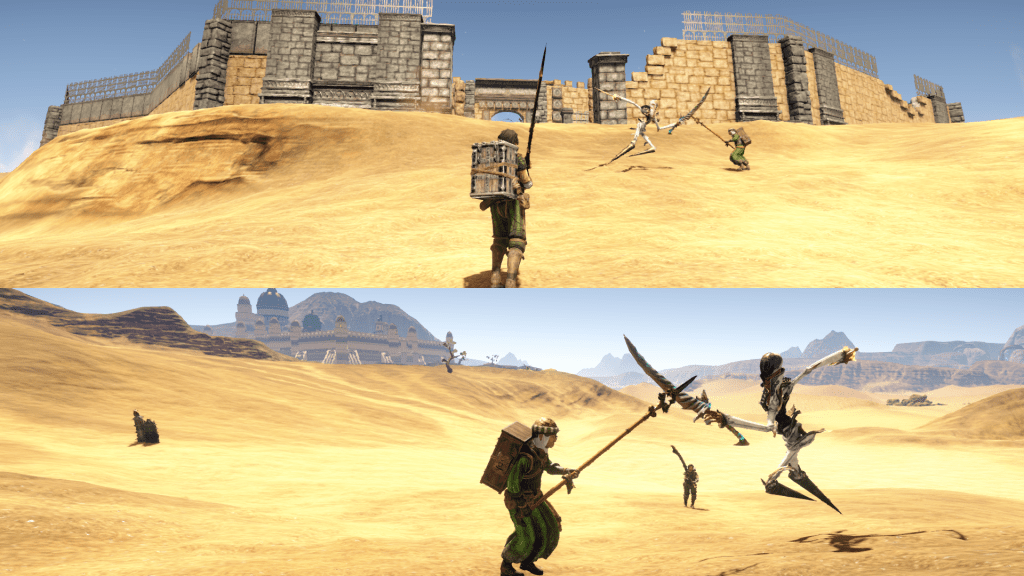 Outward removes abstraction from a lot of different places, even inventories. Characters come with 10 inventory slots, but everything else has to be carried in backpacks, which come in a variety of shapes and sizes. They don’t just store equipment, they reflect the person whose back they’re strapped onto.

“What you see when you’re in third person view is a character’s back, and backpacks show your progression and who you are,” explains says Boucher-Vidal. “Maybe you have a much smaller backpack with low capacity, but you can still dodge with it; maybe you have a trader backpack that’s gigantic, but it lowers your movement speed. It’s a very different experience.”

Some backpacks might be too big to bring with you into a dungeon because they’d stop you from getting out of the way of a monster attack. Similarly, carrying a torch would stop you from carrying a shield or using a two-handed weapon. Your tools are handy but also create wrinkles and limitations. That’s where a friend comes in handy.

In combat, duos can back each other up and pick up the slack. One player might hang back during fights, firing bow and carrying a huge backpack. This would leave the other player free to run circles around enemies. The entirety of Outward can be playing in co-op, online and in split-screen, while players can also jump into each other’s games, keeping their character progression when they hop back into their own. This isn’t the case for quest progression, however, which means you can get glimpses of other worlds and storylines.

Boucher-Vidal realises that a lot of players will only play Outward once, but multiplayer gives them an opportunity to see the world change in different ways, and maybe gain a slightly better understanding of the factions they didn’t decide to work with.

Ultimately, whether it’s through the areas adventurers will visit or the factions whose stories they’ll explore, the team’s objective with Outward was to get players doing more than repeating the same cycles over and over again. It’s a world designed to pull you in lots of different directions, each with new systems and unique challenges.

While a release date has yet to be announced, the end’s in sight for Outward. The game itself is almost complete, but the studio wanted to find the right partner. Today, Nine Dots announced that it’s working with publisher Deep Silver. It’s been over three years since it first appeared on Steam Greenlight, and Boucher-Vidal is eager to get it out into the world.