Visor has raised $4.7 million for its artificial intelligence system that analyzes Overwatch gameplay in real time and offers instant advice on how gamers can do better.

Visor is unveiling an open beta version of the platform, which aims to sharpen the skills of everyday gamers so that they can have more fun, without ever leaving the game experience. Visor wants to help gamers of any skill level to improve over time.

“It is for the everyday gamer,” said Visor CEO Ivan Zhou in an interview with GamesBeat. “There isn’t an ideal gamer. It’s not aimed at becoming top 500. It is to create a real-time performance compared to yourself. We don’t think of Visor as a coach.” 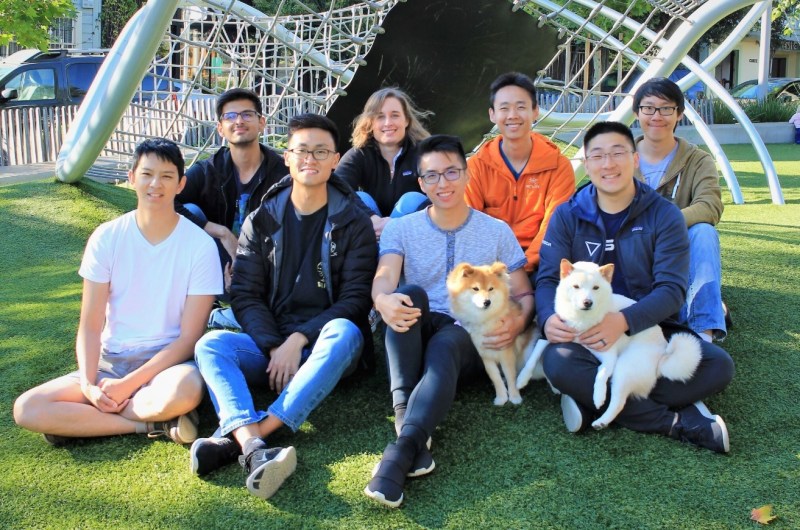 Above: The Visor team

San Francisco-based Visor’s team went through the Y Combinator accelerator program earlier this year. Even while esports is becoming more popular, it can be hard for newcomers to figure out what is happening in hyper-competitive multiplayer games like Overwatch, Dota 2, and Fortnite.

With hundreds of millions of people now playing these games, there’s a premium on thinking and moving fast. Success means outsmarting and out-maneuvering your opponents. But you can’t really learn that well by reading some tips or watching someone else play. Visor believes that you can learn much better when you get a tip in the middle of a match, and that’s what it does.

Visor has created a new platform that uses machine learning, computer vision and players’ own performance data to instantly analyze what’s happening in a game, and give gamers objective insights –in real time — on how they’re performing against the most important metrics. Having that knowledge gives gamers a chance to boost their performance, and can motivate them to improve over time.

Visor’s approach can help any gamer and will work with any game, but they’re starting with support for Overwatch.

Zhou and cofounder Anhang Zhu said that gaming was important in their formative years. They met in college at the University of California at Berkeley.

“I still remember every late night, hosting marathon LAN parties to play uninterrupted Dota just so we could beat our friends the next day,” Zhou said. “For a long time, Anhang and I felt like gaming was made up of just a few pockets of people like us who were passionate about a game. But today, it’s clear that we’re not alone.” 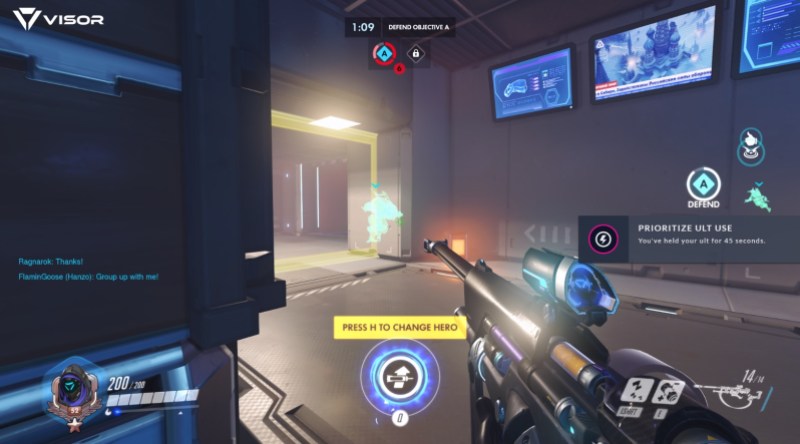 Above: Visor tells you when to use your Ult in Overwatch.

Now there are 2.3 billion gamers. One thing driving that growth is the explosion of player-vs.-player, online multiplayer games like Overwatch and Fortnite. Real-time decision-making is now the most important aspect of every game, and the most important skill for every gamer, Zhou said.

But gamers are still looking at strategy guides the way they did a couple of decades ago. Stats-tracking websites, text tutorials, forums, and gameplay videos have only managed to digitize that content.

“Ivan and Anhang have solved a huge technical challenge,” said Amit Kumar, partner at Accel, in an email to GamesBeat. “Visor can offer instant insights on a game as it’s actually happening via their real-time data pipeline. This promises to unlock a new era of in-game experiences which bodes well for gamers, publishers, and the ecosystem at large. We could not be more excited to lead their Series A.”

Zhou said that nothing is purpose-built for games that are ongoing games like Overwatch. It’s the equivalent of using printed maps in a GPS world, Zhou said.

Enter Visor. Visor uses an intuitive combination of overlays, visual alerts, and audio cues to surface actionable information at exactly the right time so players can improve dynamically — without ever leaving the game. In Overwatch, players can earn a powerful capability, dubbed an Ult (short for ultimate power), during a match. They can use it for a short time and then return to normal capability.

Visor collects data on how most players use their Ults, and how it can best be used during a match. If you have earned an Ult but haven’t used it yet, Visor sends you reminder that you should do so. That reminder shows up on your screen as you are playing.

“As a concrete example, say that you play Genji. The Dragon Blade is his ultimate power. How are you performing during a match? Visor analyzes how many Dragon Blade kills you get per minute. It tells whether you as a gamer on your own pace or not.” 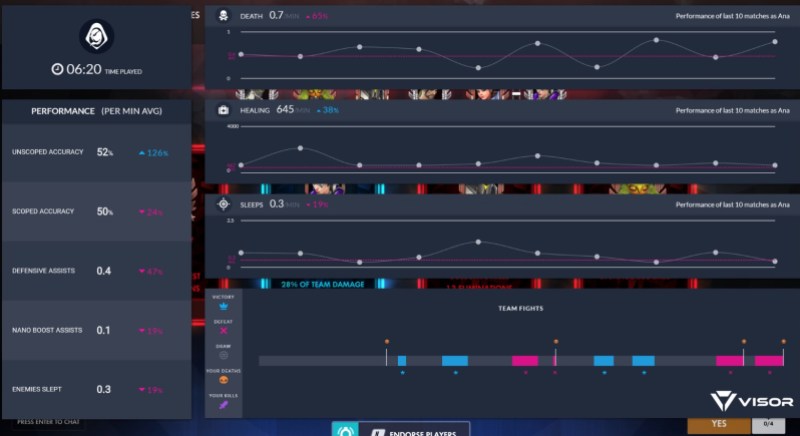 Above: Visor’s analytics show how you performed in a match.

To do this, Visor had to build a real-time engine that analyzes every single frame of a game as it’s happening. Like a second brain, Visor remembers each gamer’s play history, understands every event from the current game, and provides feedback incorporating this context.

“We created a neural network. With half a billion frames of gameplay, we trained it. We feed the data through a decision network to get human understandable insights,” Zhu said. “We push it back to players as they play, in less than a second.”

After just one match, Visor starts calibrating to the individual, tracking longitudinal performance within a match to identify exactly when a gamer is under- or overperforming on critical in-game metrics. 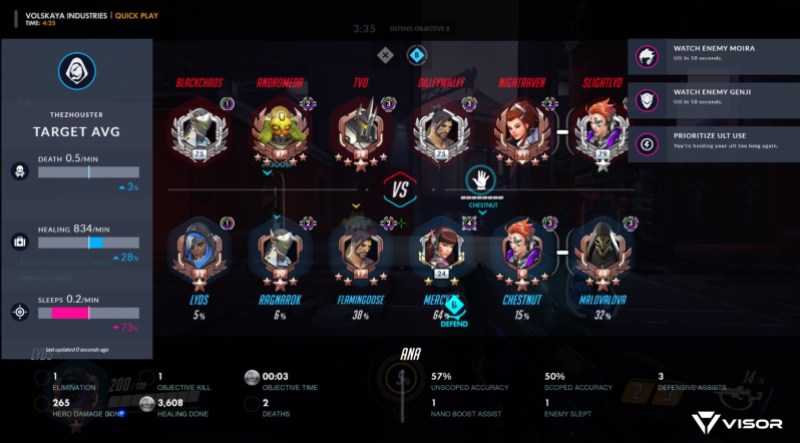 Above: Visor can tell you how often you died in a minute.

From a technical perspective, Visor can use the platform for any game. It can pull data from and push data to anything that you play, with minimal latency, or interaction delays.

“What makes this interesting is that it’s a big opportunity,” Zhou said. “We are solving a universal problem for all of these games.”

The company created custom computer vision and machine learning models using some of the most advanced techniques available, Zhou said.

Thousands have already tried out Visor’s advice for Overwatch. Now even more can join in the fun. Visor has a team of eight people. The company will use the funding to accelerate development, built out its engineering, design, community, and product teams, and expand its platform for new games.