Destination: Primus Vita is an episodic narrative puzzle game that weaves together a number of elements into a fantastic sci-fi tale. It’s Epsilon Games’ debut title, a new studio that boasts Ubisoft veterans among its team members.

In Destination: Primus Vita, it’s the year 3044, several centuries after an alien race called Shatters attacked Earth and drained the planet of all its water. Each of the episodes will focus on a member of Crew 121, a squad of engineers, scientists, and combat specialists who are on a mission to confront the Shatters and, if possible, retrieve the stolen water.

Epsilon has teamed up with Green Man Gaming Publishing to release the first chapter, Austin, on PC on August 16. 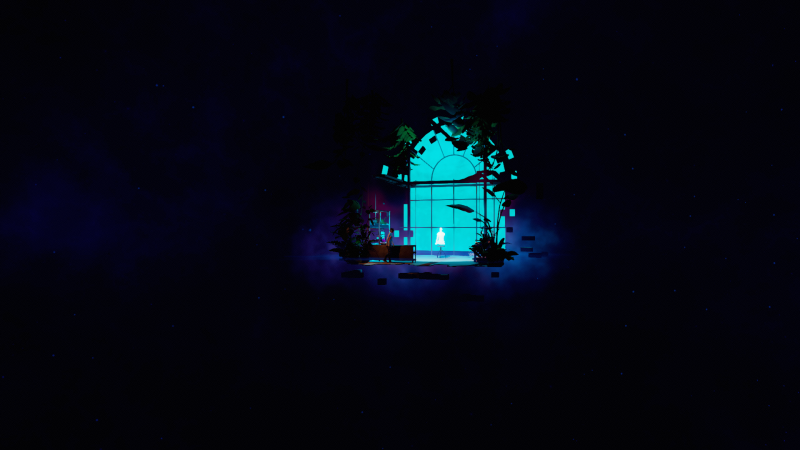 Above: Each character is introduced via a scene that appears suspended in space.

As Crew 121 enters cryo-sleep on its way to Primus Vita to search for the Shatters, each of its members undergoes a specialized simulation by their ship’s AI, Nim. These are designed to keep them cognitively sharp — as well as to help each person confront and work through their issues. The first up is scientist Austin Blair-Moreno, whose genius is only matched by the level of dysfunction in her personal relationships.

Nim acts as part-survival coach, part-therapist for Austin. It creates a virtual environment that’s similar to Primus Vita and presents her with challenges and scenarios. What would happen, for instance, if a Shatter attacks them and she’s forced to cobble together equipment under pressure? The Shatters are enormous metallic beings who seem to wield advanced magnetic technology, which Austin tries to decipher while in crisis mode.

In between attacks from the Shatter, Austin explores her relationships with each of the crew members. Nim summons up memories, recreating them as small scenes that are delightfully surreal, floating in space like dioramas that grow to life-sized as she approaches them.

Epsilon has done a terrific job with designing dream-like environments that remind you that this is all in Austin’s mind without sacrificing the practicality of such a simulation in Crew 121’s situation. When she’s racing to figure out alien tech, Austin’s in a base that features gravity-bending walkways and giant magnetic engines. As she talks to her colleagues, the world is condensed into a hydroponic lab or an apartment or a single hallway, which appear with theatrical flourish as though on a sound stage.

A variety of interactions 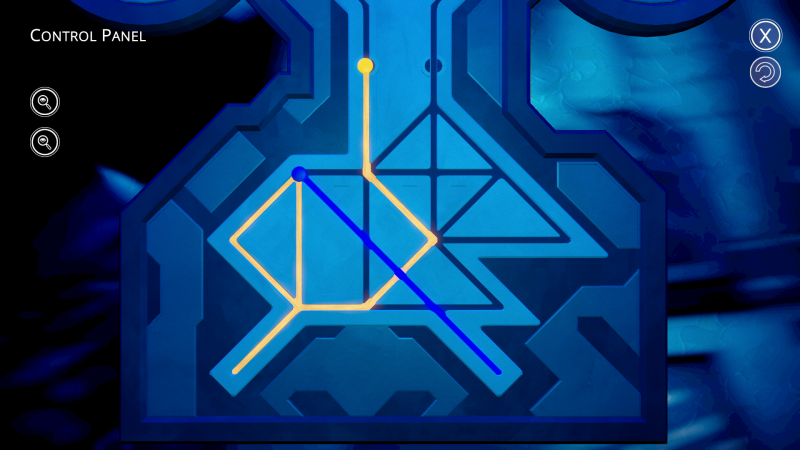 Above: Destination: Primus Vita has a variety of puzzles, which rely on colors and shapes.

Destination: Primus Vita utilizes a number of mechanics. Its world is strewn with short notes that explain what happened when the Scatters attacked as well as anecdotes from the aftermath. You might also find short correspondences, diary entries from survivors, or emails between Austin and mission command. Investigation is a key part of the experience, in order to fully unveil the relationships between her and her crew mates. As you “revive” each team mate, you’ll be able to talk to them and get to know them better.

As Austin examines her surroundings, she also finds clues for how to solve puzzles. These include spatial challenges where you must line shapes up with each other, as well as color-based ones where you have to guide nodes through what looks like a circuit board to create a certain pattern.

Other challenges are time-based, like navigating labyrinths or hitting switches — and the game throws some quick-time events at you as well to keep you on your toes.

Most of the voice-acting is on-point — though occasional flubs come across as a bit ham-fisted — and It deftly communicates each character’s distinct personality, like the daydreamy Hayao, the stolid BrX, and Austin’s little brother and team leader Coby, who is equal parts defiant and anxious for his big sister’s approval.

Each of the characters has a different environment associated with them, and they also have tiny musical riffs that reappear throughout the game. Together, it creates an energetic techno soundtrack that’s catchy and meaningful. 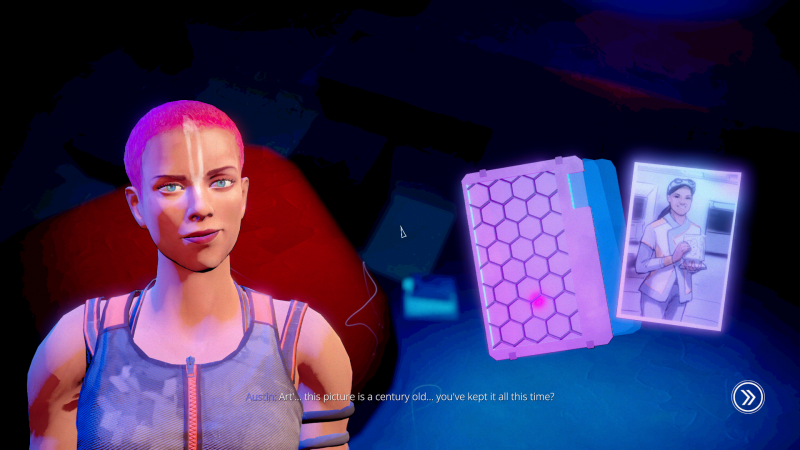 Above: Austin talks to crewmates, like Artemis, and strengthens her emotional bonds with them.

Most of the user interface works seamlessly, but it’s occasionally frustrating. As you explore the scene, a white circle appears over objects that you can interact with. This sometimes blends in with the environment, forcing you to rely on the sound cue and hunt for what you’re supposed to click on. The subtitles are also all in white, which makes visibility challenging on occasion.

Some of the puzzles also have finicky controls, making it difficult to drag certain nodes. In one case, you have to manipulate several different objects and you have to hover your cursor precisely otherwise you’ll accidentally move the wrong one. This could have been avoided, maybe with a key stroke that shifts from one set of objects to another.

Each of Destination: Primus Vita’s chapters will explore a character, and this first episode does a decent job of painting Crew 121 in broad strokes. However, Austin herself felt a little one-note; her relationships with each of the characters boils down to the same set of prejudices and preoccupations.

The crux of her character is the fact that she puts her job first to the point where she can accidentally come across as brusque, arrogant, or oblivious to other characters’ needs. This is occasionally unrealistic. Toward the end of the chapter, we learn more about her backstory and a particularly emotional aspect of her childhood. I would have liked to see echoes of this in her interactions with Coby, or to see a more nuanced investigation of her motivations. 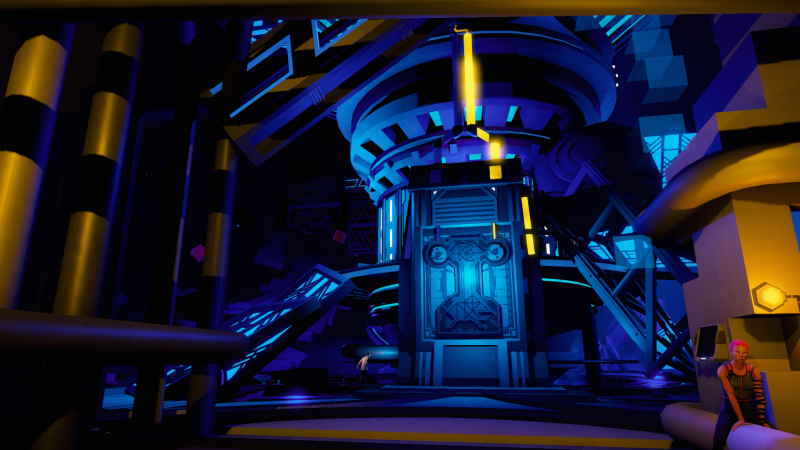 Above: Destination: Primus Vita’s environments alternate between a futuristic base and dreamy theatrical rooms.

Destination: Primus Vita is an enjoyable narrative sci-fi experience. It looks and sounds terrific as you investigate your environment, solve puzzles, dash through mazes, and navigate short conversations with your colleagues and friends. Scraps of lore about the Scatters and their origin help build an interesting world and provides a menacing enemy.

I wish that we got to know Austin a little more, but this is only the first chapter. It will be interesting to see how she comes across in the other chapters as we get to know her from their perspectives. Overall, this is a strong start to the series that shows a lot of promise depending on how it weaves together all the characters’ stories.

Destination Primus Vita — Chapter 1: Austin is out on PC on August 16. The publisher sent us a digital code for this review.