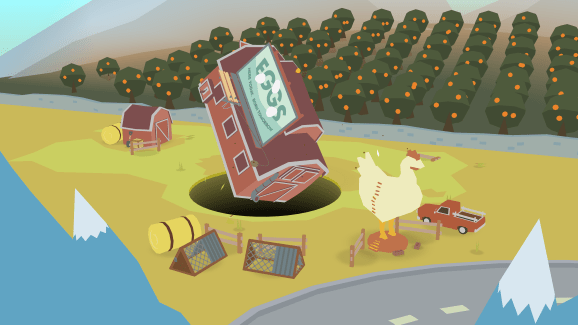 Donut County is an adorable game where you play a hole in the ground. Minimalistic though that may sound, it’s neither easy to make — nor does it have a simple message to convey. Developer Ben Esposito has teamed up with publisher Annapurna Interactive to launch the title on PC, PlayStation 4, and iOS on August 28.

Esposito describes himself as “in love with L.A. in a serious way,” and much of the scenery in Donut County evokes classic Los Angeles landmarks — like Randy’s Donut, which advertises itself with an enormous rotating treat; or Griffith Observatory, which has appeared in movies like Rebel Without a Cause. His love affair with the city is also reflected in the symbolic importance of the donut, which is ubiquitous throughout town.

“There aren’t a lot of donuts in the game, but the reason the donuts are an important theme is because, one of the things I thought was interesting when I moved to L.A. was how donuts haven’t been taken over by chains in L.A.,” said Esposito in a phone call with GamesBeat. “There are serious mom-and-pop donut shops that run L.A. They’re very specific to the neighborhoods they exist in. You can get different flavors and different styles of donut shop depending on what places you go, and they’re always run by people from the community. I thought that was so interesting. It was kind of like the heart of L.A. to me when I moved here.”

If the donut shop represents a community gathering place, then the hole is the mindless consumption and destruction wrought by gentrification. It’s a theme that Esposito immediately wanted to explore from the early stages of the game. Originally, he had a simple message — that gentrification is bad — but the more he thought about it, the more he realized how complex the topic was and his own role in the process.

“The thing I learned about going really deep into learning about gentrification is that it’s extremely complicated, and there are so many forces at work, and it’s really sad, because it’s like a natural force, because of the way our society is set up,” said Esposito. “I hit a point in working on this game where I realized that there’s no easy moral in a game about gentrification, because it’s actually really sad, and it’s this process that hurts people and displaces people and then benefits people like me who are appearing in their place. I went from focusing on this moral about what we can do about gentrification, to instead looking at my role in this process. What I realized was that I’m not the one who can even say how bad it is. I’m not the one who can propose the solution.”

Gentrification is a topic of interest especially in big cities. In New York, culture clashes have emerged between long-time residents and newcomers. These recent neighbors are often blamed for rising rent prices and opportunistic landlords who evict families so that they can revamp their apartment buildings, double the rent, and attract new well-to-do renters. In San Francisco, the tech sector receives the blame. A lot of the criticism around gentrification has to do with not only displacement, but that new, higher-income residents don’t even spend their wealth in their neighborhoods to support local businesses. And along with them comes increased police presence that can pose a threat to existing communities.

“I realized [Donut County] needed to be about being the me in this situation and taking my perspective from, ‘Oh, hey, this is really cool, this neighborhood is really cheap, and I can take advantage of that,’ to understanding, ‘Oh wait, I need to learn about the people who live here and how their situation is changing and how I can reduce my impact on the culture and the community or turn it into something constructive,'” said Esposito. “That’s when I switched it to being about these idiot raccoons who are swallowing things for prizes. Because it’s kind of an analog to me entering L.A. as this tech idiot who’s making games and who ended up making lots of money getting a job out here. I feel like I was well-positioned to talk about that.”

Gamifying a hole in the ground 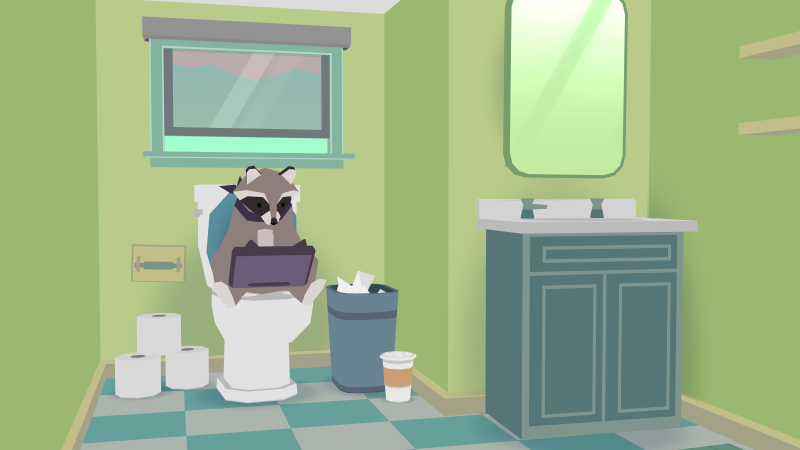 At the start of the game, the raccoons buy a donut shop and begin stealing from the community, swallowing up the environment, houses, structures, and people via a hole in the ground that grows larger the more it consumes. As the raccoons earn money from this endeavor, they spend it on frivolous things like “stupid toys and energy drinks, beanbag chairs, and quadcopters.”

“That tension is represented as the conflict of two different perspectives on what’s happening at the same time. You have both this raccoon tech gentrifier perspective, where it’s supposed to be fun and it has been gamified,” said Esposito. “To the point where the UI of the game itself is actually supposed to be what the raccoons are using to open up holes. So it’s the tension of the perspective of, I’m playing a game to get points because that’s how these raccoons feel, but also, as a human, you know you’re actually mean to relate to the people who are in the hole. The push and pull is reflected in the story.”

The thing about playing an ever-expanding hole in the ground, though, is that it’s a lot of fun. It’s delightful, reminiscent of goofy, colorful games like Namco’s Katamari Damacy. That’s part of the tension as well — you see the effect you’re having on the characters, but you can’t help but enjoy what you’re doing.

Esposito has put a lot of effort into making the mechanic feel satisfying. He says it was challenging, mainly because it’s a fairly unique and he couldn’t find many references for it in other games. He had to toy around with the physics quite a bit, playing to and against expectations for how the hole should behave. One challenge came about when players were trying to swallow up a large object.

“Everyone probably understands that a giant object that is falling appears to fall slower, even though it’s being pulled down at the same rate as a small object, because it looks so huge. But that’s not how people think it’s supposed to work in a game,” said Esposito. “They freak out when a building appears to not be falling very fast into the hole. So gravity is actually local to every single object in the game, and big objects have way more gravity than everything else. It tends to make everything feel really distant. So there’s been a lot of tweaks to create these hyperreality physics that feel right related to the hole, even though it’s actually kind of insane.”

Sound design was also crucial in making the gameplay feel rewarding. Esposito devoted a lot of energy to achieving an “in-between quality” where the sound effects were high-fidelity enough that players would be satisfied if the scrutinized them, but were also inconspicuous enough that they could fade into the background. He cites Nintendo’s documentary series around The Legend of Zelda: Breath of the Wild as a source of inspiration, particularly how the developers discussed the care they applied to the sound of Link’s footfalls.

“It turned out that impact sounds, when something hits the ground, or hits another object—it turns out those are the most important sounds in the game,” said Esposito. “That’s what you hear 90 percent of the time. It’s the thing I had to spend the most time on, figuring out how to make the sound of an object hitting the dirt sound both satisfying and not annoying. It’s basically the footstep sound of a normal video game. In my case, it’s the sound effect of cardboard hitting dirt, or a rock hitting cement.”

hey all, i didn’t think it was possible but my upcoming game @donutcounty now has a cheap clone at the top of the app store lol. here’s more info.

thanks to everyone who emailed me about this!! to get updates on the real deal sign up at https://t.co/b4cl57Pcgl pic.twitter.com/hjvUIrgJan

Esposito began developing Donut County in 2012 while he was working Giant Sparrow’s The Unfinished Swan. At the time, its name was Kachina, but it had some of the recognizable hallmarks of the final version of the game — friendly, colorful aesthetics and a hole in the ground. Since then, he’s demoed it at major events like the Electronic Entertainment Expo. Then in June, two months before Donut County is slated to release, a clone popped up on the Apple App Store and hit the top of the charts for arcade games.

Though Voodoo’s Hole.io doesn’t have the same story or look, it copies the main mechanic of playing as a hole in the ground. He was “extremely mad” when he discovered it, and he sought the advice of his friend Asher Vollmer, who made the mobile game Threes. Famously, Threes was cloned by 2048, which became more popular than the original.

In Vollmer’s opinion, seeking legal recourse against Voodoo would be too costly, both of Esposito’s time and money. He also offered the perspective that being cloned might have some beneficial side effects.

“The other thing he mentioned, which helped me alleviate some of my concerns, was that the clone of his game, in a way, kind of helped the spread of his original game,” said Esposito. “And the market, it turns out, is so vast, especially on mobile, that kind of echoing effect didn’t hurt him as much as he thought. In fact, it may have helped him. In my head I’ve been trying to reframe my idea of, OK, the market for my game is pretty big, but it’s going to cost $5 on mobile, and not that many people buy things at that price, so maybe people will be able to get this other game that’s similar for free—maybe that will spread the word about mine, and maybe that will prove that people have an appetite for being a hole in the ground. Maybe it’ll be a good thing? But mostly it’s just very demoralizing.”

Frustratingly, indie developers can’t do much about clones, which are a common occurrence. Voodoo has copied other indie titles before, like Infinite Golf, which bears a resemblance to Captain Games’ Desert Golf; and The Fish Master, which has been likened to Vlambeer’s Ridiculous Fishing.

Esposito has some advice for developers who might find themselves in similar situations:

“All I could offer is, if you’re in the same situation, one, reach out to people who it’s happened to and get some perspective, and two, talk about it publicly. It’s really worth it,” said Esposito. “There’s been a lot of benefit for me in talking to the press and other developers. It’s been a good conversation about the state of the marketplace on mobile because of it. Who knows? People who run the market might see that. Apple might have seen it. I don’t know. But it’s something to raise awareness around. You have an opportunity there.

“But mostly, take care of yourself. That’s my advice. Motivation is your main resources when you’re working on such a small scale. You have to do whatever you can to preserve that.”