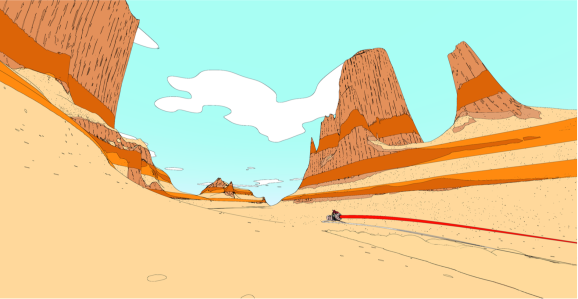 Indie publisher Raw Fury wrapped up a Series A round of funding with a $5.5 million investment from Nordisk Film Games, which was the sole investor in the round. The publisher has a few titles cooking, like Shedworks’ Sable and Plausible Concept’s Bad North, and the money will go toward signing larger titles as well as expanding the team’s production abilities.

Nordisk Film Games is a subdivision in the Danish film and entertainment company. In May, it also made its first acquisition — Just Cause developer Avalanche Studios, which it bought after investing $10 million in that team in 2017. Nordisk concentrates its funds in the Nordics, and Sweden-based Raw Fury is its latest investment. Nordisk Film Games senior partner Martin Walfisz along with Nordisk Film Games managing director Mikkel Weider will be joining Raw Fury’s board of directors.

“I’ve known some of the people on the [Raw Fury] team for a while, for a long time actually,” said Walfisz in a phone call with GamesBeat. “Then we started talking with them actively about a year ago, more than a year ago, discussing if there was a potential for us to invest at some point. Now, during the summer, the stars were aligned.”

Walfisz founded Massive Entertainment in 1997, which Ubisoft acquired in 2008. From his perspective as a game industry veteran, he’s seen how the relationship between games and film has changed over the past 10 years.

“But I think that over the past decade, the film industry in general – I can’t speak for Nordisk Film in this regard – but the film industry in general has gone from creating movies and then expecting the game industry to create games for those movies, and rather is starting recently to look the other way, and see what games they can take to create interesting movies from them,” said Walfisz. “What game IP can they exploit in movies and books and comics and other media? That’s what we see in Nordisk Film. Games are in many ways driving the IP creation process.”

In part, that’s why he thinks Raw Fury is so important. Publishers are key to helping indie games overcome the discoverability issue that plagues small games, and they have a whole different skill set that they can offer studios who might want to focus solely on development.

“[Raw Fury] really want to align their agenda with the developer’s,” said Walfsz. “Too many publishers, especially in the old days, were a bit more focused on just squeezing everything they could from the developers they worked with. The recent era of smaller publishers, and Raw Fury is one of them, they’re much more focused on creating an environment where the ecosystem and the relationship is much more long-term, so to speak.”

Nordisk Film Games has made six investments so far, all in the Nordics. Walfisz says that it’s possible the fund will expand outside of that region in one or two years.