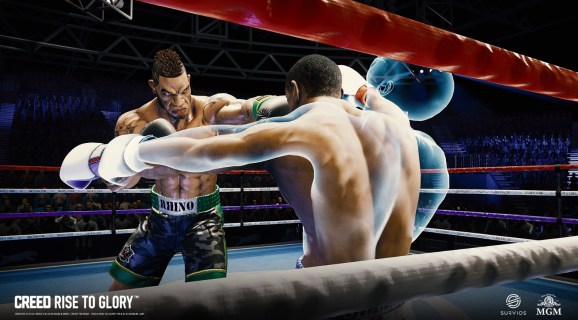 Creed: Rise to Glory is debuting on PSVR on September 25.

Creed: Rise to Glory enters the ring for the PlayStation VR virtual reality headset on September 25 for $30.

For the first time, developer and publisher Survios will offer a preorder for one of its VR titles, as well as a physical copy of the game on PSVR.

I’ve tried this game out, and it’s quite realistic. You swing at your rival in VR, and you can hit or miss. Whether you land a blow or not, you get sweaty. And in that sense, the game achieves the rare goal of getting a gamer off the couch in the name of exercise and fun.

If you preorder, you can get an exclusive avatar and a theme pack for the game, which is based on the 2015 Creed movie, starring Michael B. Jordan. The story follows Adonis Creed, son of heavyweight champion Apollo Creed from the Rocky movies. Creed II debuts, with Jordan reprising his role, on November 21. The early release of the Creed VR game could raise awareness for the film.

The VR game will debut on other platforms, but the dates will be released at later times.

“For so many game developers whose homes proudly showcase our console collections, being able to add our own title to their ranks means the world,” said Mike McTyre, Survios’s head of studio, in a statement. “We’re proud of what we’ve created with the continued support of MGM and Sony, and we’re excited for everyone to step into the ring and become a champion.”

In the game, you experience the ascent of Adonis Creed, trained by Rocky Balboa in familiar gyms, including Mighty Mick’s and Front Street Gym. Then you step into the spotlight to take down seven champion-level opponents in boxing matches.