We’re just a few weeks away from the release of a new Spider-Man game, which will be a PlayStation 4 exclusive when it launches on September 4. Having played some of Insomniac’s open-world superhero game at the Electronic Entertainment Expo this year, I’m pumped to play the rest of it.

But before that, I’m feeling a bit nostalgic (which, to be fair, is kinda how I always feel). I’m thinking about a Spider-Man game from the past. And no, I’m not talking about 2004’s Spider-Man 2. That movie-based game is the first to put the web-slinger in an open world, and its swinging mechanics still feel great. But I’m going back just a bit further, before Spider-Man became a movie star. I’m talking about a game simply called Spider-Man, which came out for the PlayStation in 2000, with other versions following for Nintendo 64, Dreamcast, and PC.

Compared to what we’re getting with this year’s Spider-Man, the 2000 attempt is a crude 3D game. Heck, it even looks simplistic when compared with 2004’s Spider-Man 2 (which, to clarify, is not a direct sequel to this game). It doesn’t take place in an open world. You don’t attach webs to actual surfaces to swing. Spider-Man just kind of swings wherever he wants, even if there’s nothing but open sky around him.

But I love Spider-Man. This was at a time when he hadn’t starred in a game in years (the last Spider-Man game came out for the 32X in 1996). It was also his first 3D adventure, which was a big deal. That prospect was also scary. The PlayStation era was the Wild West of game development, with everyone still figuring out how to make 3D games work. Now 2000 was pretty late into this generation, but we still saw a lot of bad 3D action games and platformers. To make matters worse, many of them were licensed games, like Spider-Man.

This was also before Spider-Man was the giant star he is today. The Spider-Man movie came out in 2002. That’s what promoted the hero to American icon. In 2000, he was just another comic book character. Sure, he was a big deal in the comic book world, but this was before even superheroes themselves went super-mainstream. Batman and Superman had movies, and others like Spider-Man had cartoons and toys, but you weren’t as likely to say the phrase “My mom really likes Spider-Man” like you are today.

It ended up being a celebration of the character. The story, which includes voice-acted cutscenes, features all of the characters you’d hope to see, like Mary Jane and J. Jonah Jameson. It also stars many of Spidey’s best villains, including Venom and Doctor Octopus. Even other Marvel heroes make appearances, including Daredevil and The Punisher.

The fan service doesn’t stop there. Stan Lee himself provides narration for the game. You also unlock secret or bonus costumes for Spider-Man, including his Scarlet Spider and Symbiote outfits.

This is a more linear game than future Spider-Man titles. You either go from rooftop to rooftop punching bad guys, or you navigate buildings. I know, indoor Spider-Man action doesn’t sound great, but these areas still felt interesting for their time thanks to Spidey’s wall-crawling. And although the action is simple, it still feels satisfying to punch baddies and encase them in web. 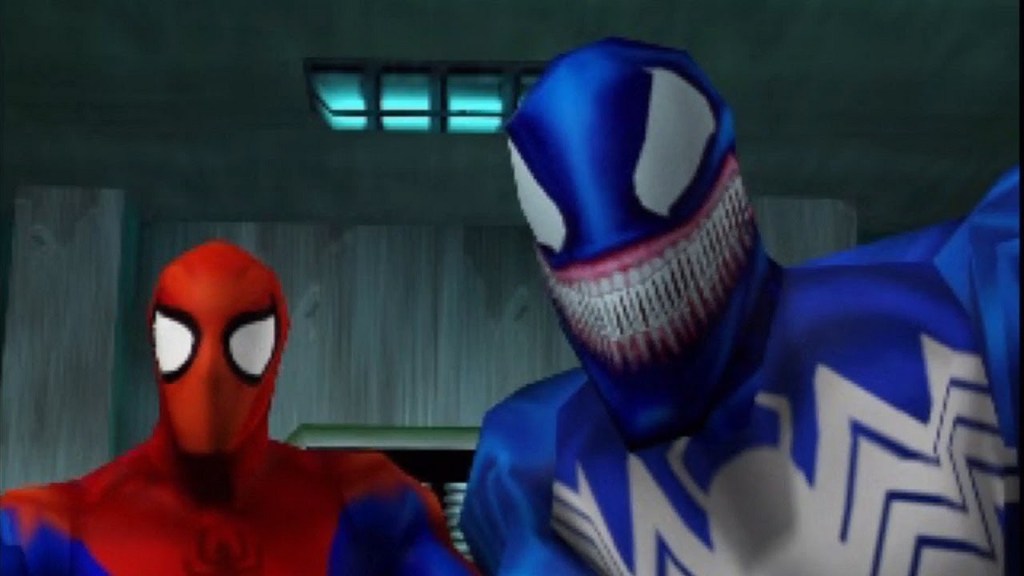 Spider-Man’s PlayStation graphics now look blurry and blocky, but they’re still colorful and show off a lot of character. Even today, I love how this game looks. The whole experience just feels like Spider-Man. Yeah, Spider-Man 2’s swinging is great, but you also have to endure Tobey Maguire phoning it in with the voice work. The Spidey quips are funnier and sharper in the 2000 game.

Neversoft developed Spider-Man. That’s the same studio behind the Tony Hawk Pro Skater series, which was a hit on PlayStation at this time. Spider-Man even uses the same engine as Tony Hawk. Neversoft knew how to get a lot out of the aging PlayStation hardware. Remember, the PlayStation 2 would launch later in 2000. But Spider-Man still stood out and became a hit.

The game would have another sequel on the original PlayStation, Spider-Man 2: Enter Electro, in 2001. Vicarious Visions, which recently created the Crash Bandicoot N. Sane Trilogy, developed the sequel instead of Neversoft. But at this point, the PlayStation was really showing its age. When it was time for another Spider-Man game, the first movie came out and became a hit. That put an end to this more comics-inspired take on Spidey.

When people look at Spider-Man on PlayStation 4, I hear a lot of them say they hope it feels as good as Spider-Man 2 did. But I hope Insomniac also took a look at the 2000 game. Neversoft was able to create a memorable and enjoyable Spider-Man experience without the benefit of star power, open worlds, or realistic swinging. Neversoft succeeded by injecting its game with a ton of personality and fun. If the new Spider-Man captures some of that, it could be a new superhero masterpiece.