Total War: Three Kingdoms isn’t coming out until the spring 2019, but Sega’s Creative Assembly studio showed me one of the things that will be different: night battles.

After giving a glimpse of the detailed campaign map, the developers let me play a battle where the army of the female leader Sun Ren was ambushed at night by several different enemy formations. I played it on both the normal and difficult settings, but the battle proved to be quite difficult — and fun.

Sega’s Creative Assembly studio has a lot of loyal fans for its Total War series of historical real-time strategy games. But after 18 years, Creative Assembly is making a change for those fans. It branched into fiction and fantasy with the Total War: Warhammer games, and now it is moving beyond pure history with the romance and mythology based on Luo Guanzhong’s 14th century historical novel, Romance of the Three Kingdoms. 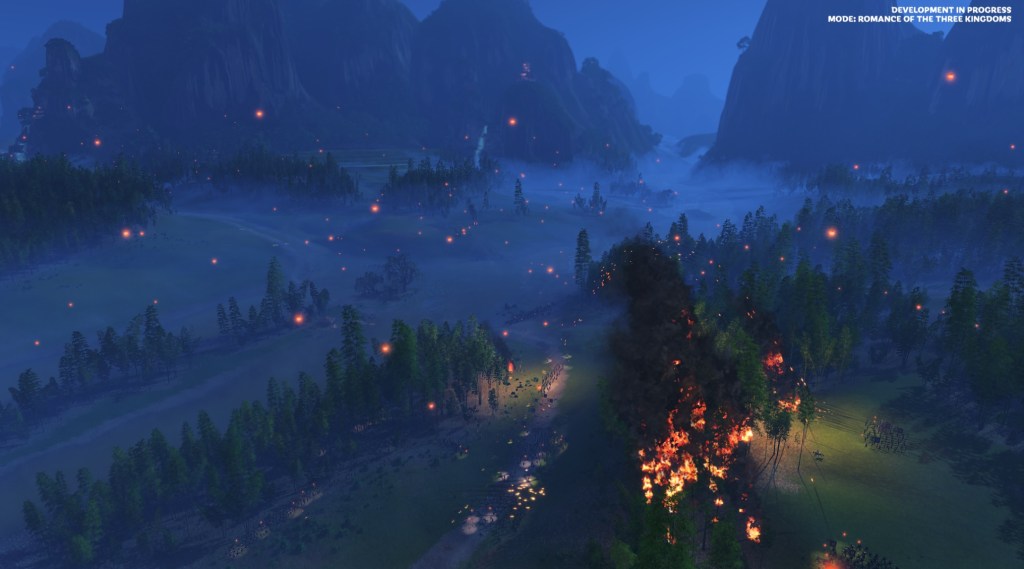 Above: Night battle: The lanterns and fires illuminate the scene.

Three Kingdoms is set in ancient China during a war for unification. It balances both historical gameplay and romanticized lore where warlords have supernatural abilities in combat as they lead their troops into battle. They can tackle scores of enemy troops single-handedly and heavily influence battles. I played the mythical option where the warlords were strong and could engage in duels. I fought a variety of battles in normal and difficult modes.

The game will feature a Classic Mode that focuses on a historically authentic Total War experience focused on war in China in the second and third centuries. I haven’t tried the Classic Mode yet, but I like the idea of the mythical version because the game tries to capture the drama of rivalry and treachery and brotherhood by using the warlords as actual characters in a narrative-driven game.

As the leader Sun Ren and her brother Sun Quan lead her army on a forest road toward a mountain pass, they are ambushed from multiple directions. Sun Ren senses that something isn’t right, but very late, just as the enemies release floating lanterns that signal the beginning of the ambush.

The game still has the traditional structure of a Total War game, where you move armies around on a campaign map and then dive into tactical battle control when two armies meet in the field. The engine now has much better visuals of the 3D battlefields, and it can do a much better job of depicting human leaders up close in the action. 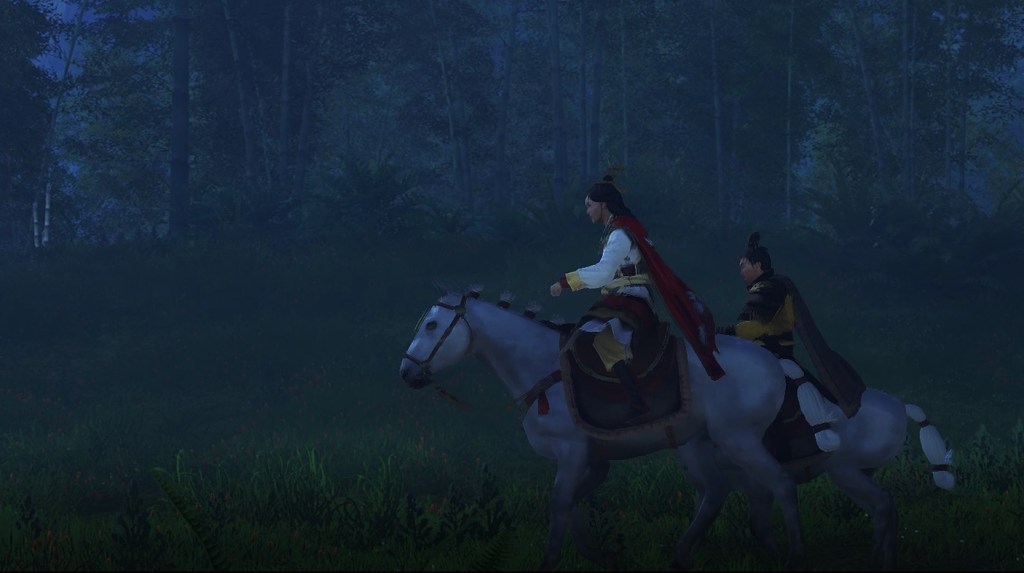 Above: Sun Ren and her brother Sun Quan sense an ambush.

Sun Ren’s formations were quite strong compared to the forces of the initial attacker, Jia Xu. As Sun Ren’s forces were moving along a road, Jai Xu attacked from an uphill forest. He had a couple of units of bowmen on the hill, and five units of swordsmen, who were mostly weak militia. The swordsmen came charging down through the trees to the road. The spearmen and sword units pinned those soldiers into melee battles. But Jia Xu had left Sun Ren’s cavalry totally alone. That was a crucial mistake.

I rallied the cavalry with Sun Ren as the leader, and then attacked the enemy flank. Outflanked by cavalry and pinned by swordsmen, the enemy crumbled quickly. And since all of the enemy units were in a line in the same position, I proceeded to do the same to the next four units. They all gave way, pinned in the front and then flanked by cavalry.

Then I made a critical mistake by failing to sweep out the rest of the enemy quickly. I turned to march toward the defensive hill, but Jia Xu rallied his archers and swordsmen to fight again, attacking me from the rear and delaying me. I had to turn back and wipe out Jia Xu, but lost a lot of time repositioning my forces. (In the next battle, I didn’t make this mistake again). I had Sun Ren fight Jia Xu in a duel and she wounded him.

Above: Night battle. The lanterns and fires illuminate the scene.

After taking out Jia Xu, I sent my forces racing for the defensive hill, where I would be attacked on both sides. I had to rush the solders to positions on the hill, and then allow them to rest. It wasn’t easy to get the formations right, as my archers were far slower at running than my other forces.

Once again, I made a big mistake. I wasn’t able to judge how quickly the enemies were coming from two directions. I should have gone after the southern forces first, destroyed them, and then turned back in time to attack the enemy. Instead, I divided my forces, and neither was strong enough to stop either force. Also, I found that Sun Ren wasn’t invincible in duels. I had to pay close attention in her duel with Xu Huang, which took place too far from the action. It was good to defeat Xu Huang, but it meant that Sun Ren was too far from my troops.

As a result, while Sun Ren won her duel, she failed to rally her army in time to defeat the enemy. On the hill, my cavalry was still strong, but it had no good targets after taking out two weak sword units. The enemy had a lot of spearmen, who were pretty immune to cavalry attacks. Then I lost Sun Ren in battle, and my outnumbered forces slowly crumbled.

Sun Ren’s brother, Sun Quan, became furious after Sun Ren fell. I tried to use his anger to attack Xu Huang, but in the meantime, all of Sun Quan’s forces lost the will to fight. They ran. 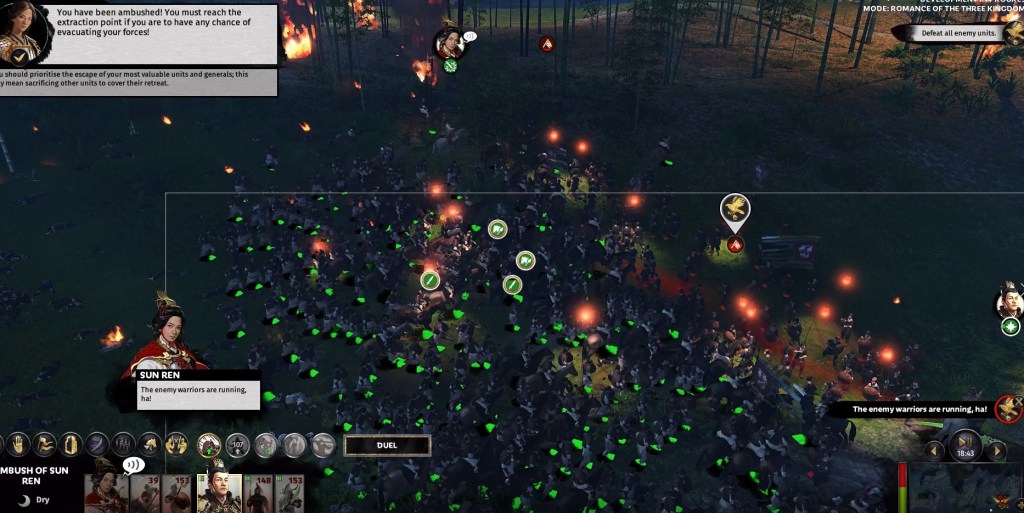 I lost the battle, but I really liked how difficult it was to win in difficult mode, where the enemy’s morale and troop quality was much stronger compared to the normal mode. It was a very difficult, balanced battle. I could have won if I had calculated more precisely what to do at each step, and I eventually did win. But that’s all in hindsight. In the real-time rush of battle, it was really hard to think of all of the things I had to properly manage in order to win. I spent too much time concentrating on the duels between the warlords, and not enough on the big picture. Perhaps I should have crushed the southern force and ran for the escape route instead.

I like what I’ve seen of this game so far. The narrative storytelling is strong, the battles are dramatic, with many turns of the tide, and the art work looks beautiful. I can’t wait for spring 2019.