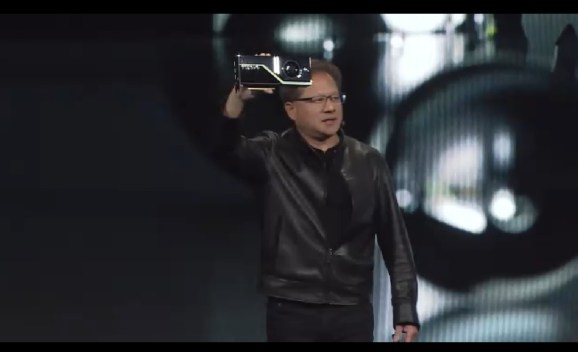 Jensen Huang of Nvidia shows off 10 GigaRay graphics card, the Quadro RTX 8000. This is the card that is informing the architecture for the RTX 2080 Ti and its cousins.

The first major event next week is a media presentation in which Nvidia will unveil its next generation of graphics cards. Fans have waited a while for news on the upcoming GeForce RTX 2000-series cards, but a new leak coming out of hardware-tracking website Videocardz is providing some of those details a few days early for both the RTX 2080 and the RTX 2080 Ti that run on Nvidia’s new Turing architecture.

What’s especially notable about these leaks is that we are getting the details for the 2080 and 2080 Ti at the same time, which means those cards are going to launch together or near one another. In the past, Nvidia has released the souped-up Ti version of its cards months after the non-Ti. But it seems like the graphics-card powerhouse has taken its time with this generation to get prepared, which is likely due to its primary competitor AMD not putting the pressure on Nvidia with next-gen cards of its own.

As you might expect, these are some powerful chips. The 2080 Ti, according to Videocardz, is rocking 11GB of the hyperfast GDDR6 memory with 4352 CUDA cores. The CUDA core is the heart of Nvidia’s GPUs, and from a numbers standpoint, the 2080 Ti has 20 percent more CUDA cores than the 1080 Ti. But Nvidia typically makes efficiency improvements to its chip architecture that could mean the 2080 Ti is more than 20-percent faster.

And while both the 1080 Ti and 2080 Ti have 11GB of video memory, the former used GDDR5x memory compared to the latter’s GDDR6 with improved bandwidth. That should help the 2080 Ti tackle the memory-hungry task of 4K gaming.

Videocardz says that it has data on the clock speeds and total draw power for these new cards, but it is holding off on sharing that because it expects Nvidia to refine those for its retail versions.

All this improved power means that your current games are going to run faster than ever, but Nvidia is also trying to move real-time graphics forward by introducing cards that are capable of computing real-time ray tracing. That’s what the RTX moniker is alluding to. This is a technology that movie effects studios have used for more than a decade to bring life-like lighting models into digital scenes, but now we’re on the cusp of that coming to video games.

But don’t expect perfect real-time ray tracing in your games even if you get the 2080 Ti. The calculations for the behavior of light in a digital world is so complex that developers will likely have to rely on a hybrid model that includes simpler, less beautiful solutions as well. Full real-time ray tracing in games is probably still five years away or more.