Last week, I got the chance to try the new enterprise-focused 5K VR headset (that’s 2,560-by-1,440 per eye, or 5,120-by-1,440 total,) XTAL, from VRgineers, the same company behind the VRHero 5K headset. For all intents and purposes, the XTAL is taking the place of the VRHero in the company’s repertoire.

What sets the XTAL apart from the VRHero and other high-end headsets is that it comes fully-loaded with other features — not just an increased resolution. The field-of-view (FOV) inside the device is a staggering 170-degrees, Leap Motion hand-tracking is built directly into the front cameras on the device, it has VoiceMacro-powered voice recognition included as well, and can even automatically adjust the IPD based on included eye-tracking hardware. The display type is an OLED with patented, custom-designed aspherical, non-Fresnel, lenses. You can read more about the technical specs here.

Soon they plan to upgrade the internal software to also enable general eye-tracking, foveated rendering, as well as inside-out tracking using the front cameras, similar to how the Windows VR headsets work. Other than being wireless, it packs pretty much every feature modern VR technology has up its sleeve into a single device.

If you’re appalled at that price, then chances are this isn’t a product for you. It’s not designed as an “order online and start playing VR games when it arrives” type of headset like the Rift, Vive, or Windows VR devices. In fact, even the Vive Pro is more of a consumer-caliber unit than this one. The XTAL is very specifically engineered for the big-budget production, industrial, and enterprise-level crowd.

Part of the package when a company buys the XTAL is that they’re also paying for ongoing support from VRgineers, eventual upgrades like inside-out tracking, and more. And even though it includes a ton more features than the VRHero did, XTAL is actually coming in cheaper than VRHero when it first debuted — plus existing clients will get it at a discount.

During my demo with XTAL I got to see four types of experiences. First I walked around a showroom with a high-quality 3D model of a car. I didn’t need any controllers like Touch or Vive wands to interact with it because of the embedded Leap Motion sensors, so all I did was reach out.

You know how when someone new to VR always reaches their hands out to touch things even though every other modern VR headset doesn’t hand-tracking included? Well, that actually works in the XTAL. I could open and close car doors, grip the steering wheel, and start the engine. I was missing out on the haptic feedback aspect, but it was still pretty immersive to see my hands inside of a 5K, 170-degree FOV device.

Seeing a 3D model of a car inside an environment that high quality was extremely impressive. While sitting upright in the seat I could clearly read the speedometer and see intricate stitching details on the interior. The applications for enterprise level customers are very clear and obvious here in terms of product visualization.

I also got to walk around a virtual apartment via teleportation, watch an assortment of 360 videos rendered at extremely high-resolution with incredible detail, and then I played a flight simulator using a joystick just so I could appreciate the cockpit detail in a real-time moving demo.

My embedded video above showing my try the headset out doesn’t really do the visuals justice. It’s hard to capture the feeling of being in VR with a 2D video, but it’s even harder to capture when that headset is 5K resolution (much higher than the video output, recorded off-screen) and features an enormous 170-degree FOV. For reference, the Rift, Vive, and PSVR are all just around 100-degrees.

In the video you’ll also notice the headset has a Vive tracker attached to the top of it, but that’s because the custom Vive-tracked detachable faceplate wasn’t available at my demo. You won’t need one of those with the final version. 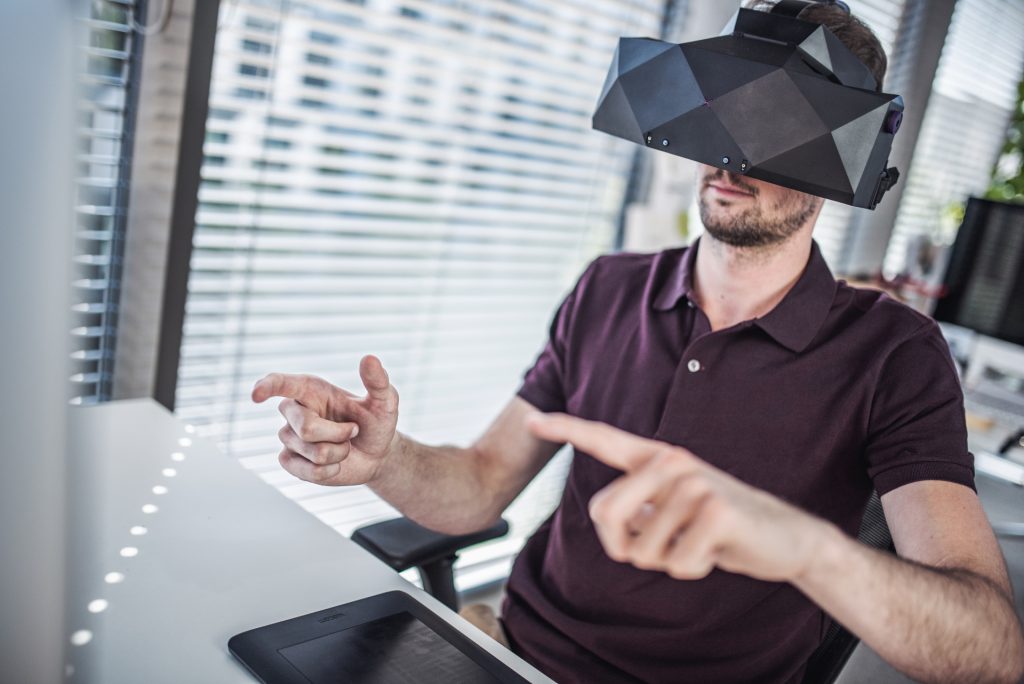 Above: Using the Vrgineers headset for work.

Since the XTAL is so large the fit was still a little wonky compared to other headsets I’ve worn. It feels heavier, although it’s much lighter than the VRHero, and it just looks downright silly — but I guess you don’t care much when you’re in VR. That cable is also extremely bulky as well and feels like a step backward.

With the comically large (but crystal clear) 8K Pimax on the horizon and the recently announced new StarVR headset, the high-end market for VR devices is certainly alive and well. If you’re an enterprise-caliber customer (a lot of VRgineers’ customers are auto manufacturers and architecture companies) then you can inquire about purchasing an XTAL right here.