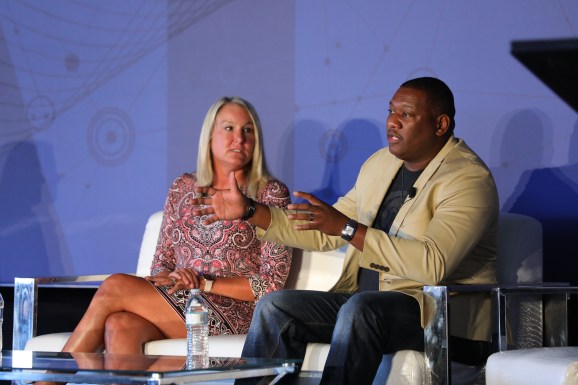 While airing pricy TV commercials and sinking the majority of its spend into physical sales points, Proctor & Gamble didn’t have the data needed to push marketing and sales agendas like nimble digital companies have done in recent years, associate director of research and development Christi Putman admitted at the Transform conference in Mill Valley.

The company started losing droves of consumers to dot-coms and specialty retail as consumers became a lot less interested in going to big box stores to select their own products. And if they did pack up the kids and take a field trip to the beauty aisle, they tended to get overwhelmed by the array of counters. Plus, Walmart and Target, two of Proctor & Gamble’s major retail partners, had heard just about every pitch under the sun, and selling new products to the giants had always been a tricky task.

Olay looked around at the number of beauty recommendation apps that were springing up and decided it could do better with the image analysis tech it had been developing for dermatologists over the past 25 years.

The company partnered with Nara Logics, and Olay Skin Advisor was born in 2016. It’s a web-based tool, rather than an app, that reduces barriers to entry, Putman says. You take a selfie, and the AI-powered engine determines your skin age and then matches you with a raft of Olay products intended to fix your particular issues — choosing from about 2 million unique regimens, all told.

Olay started out with a very limited pool of data, says Damon Frost, director of beauty and CIO at Procter & Gamble, but it continued to shore up that collection by turning Olay.com into a direct-to-consumer website. That way, Olay could see the direct impact of Skin Advisor, from the number of visitors to the basket size and conversion rate.

Skin Advisor has seen about 5 million visitors globally now in more than 10 countries, Putman added. Consumers who use the tool have doubled the conversion rate, and when they’re buying their basket size is 30 percent higher.

It’s also been the source of Olay’s biggest product launch in 10 years, Putman says. Retailers thought the launch was, in her words, a snooze, but with data from Skin Advisor indicating that millennial consumers were looking for lighter products, Olay was able to get Walmart and Target to promote its new line in a big way.

The data Olay has continued to gather helps identify holes in its lineup — such as millennials being fussy about fragranced products and wanting more sensitive skin stuff — as well as helping it pare down the number of SKUs, or stock keeping units.

Olay is still figuring out how to apply Skin Advisor’s data when addressing larger marketing and sales issues, Frost notes. A traditional consumer packaged goods company, with just its first toe in the digital product waters, requires teams with different types of skillsets to understand and translate that data into actions and to figure out how to continue driving consumer engagement.