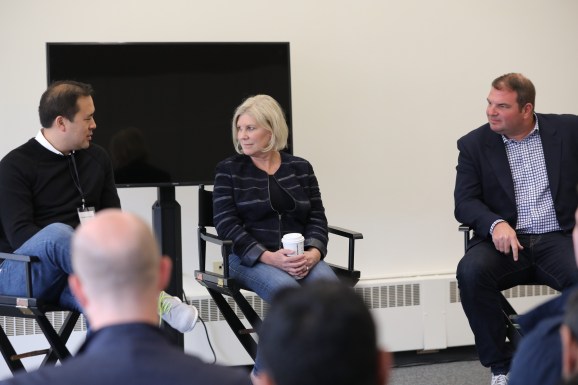 If you’ve reached out to customer support recently, there’s a pretty good chance your email, chat message, or phone call was fielded by artificial intelligence (AI). Gartner reports that some 85 percent of business-to-consumer transactions will take place without human interaction by 2020. And according to Linda Crawford, CEO of Helpshift, and Nathaniel Gates, founder and CEO of Alegion, that’s largely a good thing.

Crawford and Gates participated in a panel discussion at VentureBeat’s Transform 2018 summit, where they spoke about the (sometimes uncomfortable) marriage of AI and humans in the customer service space.

Crawford said that for Helpshift, an in-app and web-based customer support platform that facilitates customer service interactions,  conversational bots aren’t just a core part of onboarding — in some domains, they’re capable of handling transactions full stop. “We think of them as new ways to think about how we service consumers,” she said.

Helpshift works with retail and financial service companies, but a few of its largest clients are on the gaming side. One is PlayerUnknown, the developer behind blockbuster video game Battlegrounds.

“One of the things that gaming [gives] us is this massive scale,” she said. “A game could go from 10 people using it to millions … You can’t have humans respond to every issue, so we look at ways to have something like an answer bot surface FAQs.”

Most of Helpshift’s customers aim for a deflection rate of about 40 percent, Crawford said — a tall order for game developers, who devote enormous resources to combatting account fraud.

“Customers are after a great experience,” she said. “Most people would rather clean their bathroom than talk to customer service, by a large percentage. They’re happy to interact with bots as long as they get their issue resolved straight away.”

Gates agreed. Alegion, unlike Helpshift, works mostly behind the scenes and business-to-business, prepping the data on which AI models are trained with content moderation, data categorization, data collection, and form data entry. But they share a common mission. “We’re working with data science teams who are trying to push value to their customers,” he said.

Motorola, one of Alegion‘s clients, is developing a next-generation 911 system for first responders.

“It’s a fantastic opportunity to augment humans,” he said, “because it can take into account more data than a human can address — like more than 400,000 hours of transcripts from emergency services. We’re giving humans tools and the ability to access data they can’t access on their own.”

Alegion is also active on the retail side. Specifically, it’s helping build an AI system that uses thousands of cameras in brick-and-mortar stores to track and catalog items throughout the shopping process. Gates described it as “an alternative to RFID.”

Crawford, who said that Helpshift’s platform will soon be able to fully automate certain types of tickets — some of which can individually make up as much as 10 percent of a given company’s customer support ticket volume — offered retraining as a potential solution to workers impacted by automation.

“You have to have a tech background to make sure you have a job,” she said. “India, the Philippines, and some places in Central America have already figured out how they’re going to do this.”

Gates contended that job losses resulting from AI won’t be as dramatic as predicted. The data is on his side — In December 2017, Gartner forecast that AI would create a net 500,000 in the next two years, and 2 million by 2025. And researchers at McKinsey Global Institute concluded that while as many as 73 million jobs are at risk of being automated by 2030, new ones will be created in their wake.

“We’re hiring people in the thousands [for data classification],” he said. “We’re creating new jobs that stand on the shoulders of the AI revolution.”