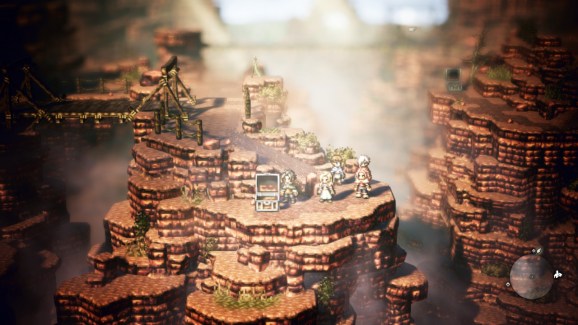 The world has a unique way of showing depth.

The games industry in the United States generated $749 million in revenue in July, according to industry-tracking firm The NPD Group. That’s up 14 percent from $655 million during the same period in 2017. Hardware and accessories drove most of that growth, although a big new Nintendo release and Grand Theft Auto V were able to help save the software sales side.

But software along with hardware and accessories have had a strong 2018 overall.

“Year-to-date spending across video game hardware, software, accessories, and game cards is up 17 percent when compared to the same period a year ago, to $6.8 billion” NPD analyst Mat Piscatella said. “Growth has occurred across all categories of spending, with accessories and game cards driving the largest dollar growth.”

Here are the numbers for July:

Keep in mind that these numbers include physical sales from U.S. retailers and U.S. digital sales from participating publishers. Many of the biggest publisher participate, but Nintendo doesn’t share its first-party info, and Activision Blizzard doesn’t share Battle.net sales, for example.

These charts are sorted by dollar sales, not number of units sold.

The persistent narrative around Nintendo right now is that its Switch doesn’t have any games, and yet it is having a dominant summer 2018. After coming out on top with Mario Tennis Aces in June, Octopath Traveler took the No. 1 spot in July. That classic-style role-playing game blew up on the console and was able to have an impressive debut.

“Octopath Traveler was the best-selling game of July 2018,” said Piscatella. “Half of July’s top 10 best-sellers are Nintendo platform exclusives.”

If you’re thinking that Nintendo is just owning the lean summer months, well you’d be wrong. It has owned all of 2018 so far.

“Nintendo is the top-selling full game software publisher for both July and year to date,” said Piscatella. “Nintendo Switch is the only platform showing year-on-year growth in full-game dollar sales with gains of nearly 70 percent when compared to a year ago, despite digital sales on Nintendo platforms not currently being tracked by The NPD Group. Year-to-date sales of full-game software on Nintendo Switch have more than doubled when compared to a year ago.”

Oh, but it wasn’t all Nintendo. Grand Theft Auto V also had a strong month because … it always does. Of course, the open-world crime game is getting help from the recently released GTA V: Premium Online Edition that launched for $60 in April. It also benefited from a lack of new releases on Xbox One and PlayStation 4.

Finally, for software, the NPD analyst noted that games below the M For Mature rating (T For Teen and E For Everyone) are seeing an uptick in performance.

“Dollar sales of games rated by the ESRB as either Teen or Everyone have grown 22 percent year to date, to $1.2 billion,” said Piscatella. “This group of titles accounts for 44 percent of overall consumer spending on full-game sales tracked by The NPD Group, an increase of 6 share points when compared to a year ago.”

This is likely due to a combination of factors. Fortnite is bringing more kids into console and PC gaming, and the Nintendo Switch is popular with families. We’ll see how this trend continues as more people who grew up with gaming begin to have families.

The rest of the charts

It was another strong month for all platform holders, but it was especially good for Microsoft and Nintendo.

“Hardware spending in July 2018 grew 19 percent when compared to a year ago, to $217 million,” said Piscatella. “Gains were driven by Xbox One, Switch, and Plug N Play devices such as NES Classic Edition.

Overall, hardware continues to fly off the charts in 2018. Spending on hardware is up 21 percent to $1.9 billion year-to-date. Piscatella notes that sales of Xbox One, PlayStation 4, NES Classic Edition, and Super Nintendo Classic are the primary drivers this year.

“Year-to-date hardware spending is at its highest level since 2011,” said Piscatella.

But it was the Switch that took July.

“Nintendo Switch was July’s best-selling hardware platform in both dollars and units sold,” said Piscatella. “This is the seventh month that Switch has led in hardware dollar sales since launching in March 2017, and the first since December 2017. Unit sales of Nintendo hardware in July 2018 reached its highest point for a July month since 2009.”

Microsoft and Sony are both doing just fine, though. Xbox One hardware sales are trending up. In terms of dollar sales, the Xbox One platform grew by 50 percent year-over-year in July. Year-to-date, it’s up more than 60 percent.

And the PlayStation 4 is still the best-selling platform of 2018 so far. It could solidify that position with the launch of Spider-Man in September, which I’ve heard is outperforming expectations in terms of preorders.

It was another massive month for video game currency cards and the various other accouterments that you can find at GameStop. Sales were up 49 percent year-over-year, for a record high for any July that NPD has tracked since 1995. And once again you can probably point to Fortnite as the driver of this growth.

“Year to date, accessories & game card spending has grown 33 percent when compared to a year ago, to $2.1 billion,” said Piscatella. “This is also an all-time high, significantly exceeding the $1.6 billion generated in the 2016 year-to-date period.”

Most of that money is going toward gamepads and headsets.

Finally, Microsoft had the top controller.

“The Xbox One S White Controller was July’s top revenue-generating accessory,” said Piscatella. “While the PS4 DualShock 4 Black Controller has driven the highest dollar sales of any accessory year to date.”