As we know, when you play the Game of Thrones, you win, or you die. And in Reigns’ stylized adaptation of the HBO series, I died. A lot. Over and over again.

And beginning in October, so will you.

Reigns: Game of Thrones will launch in October on PC, iOS, and Android. It’s an adaptation of Reigns, the award-winning card-based kingdom simulator from the indie developer Nerial (aka François Alliot) and game publisher Devolver Digital. It will sell for $4, and while you may think that being a paid app might be in for a Red Wedding on the free-to-play dominated mobile platform, Devolver sold more than 2 million copies of the 2016 Reigns on PC and smartphones, and that’s a significant achievement in a mobile-led game market that research firm Newzoo projects could hit $137.9 billion in 2018.

This is Devolver’s first partnership with HBO, and Game of Thrones by far represents its biggest brand partnership. The TV adaptation of author George R.R. Martin’s A Song of Ice and Fire series is a media juggernaut, becoming one of the most valuable brands in media. 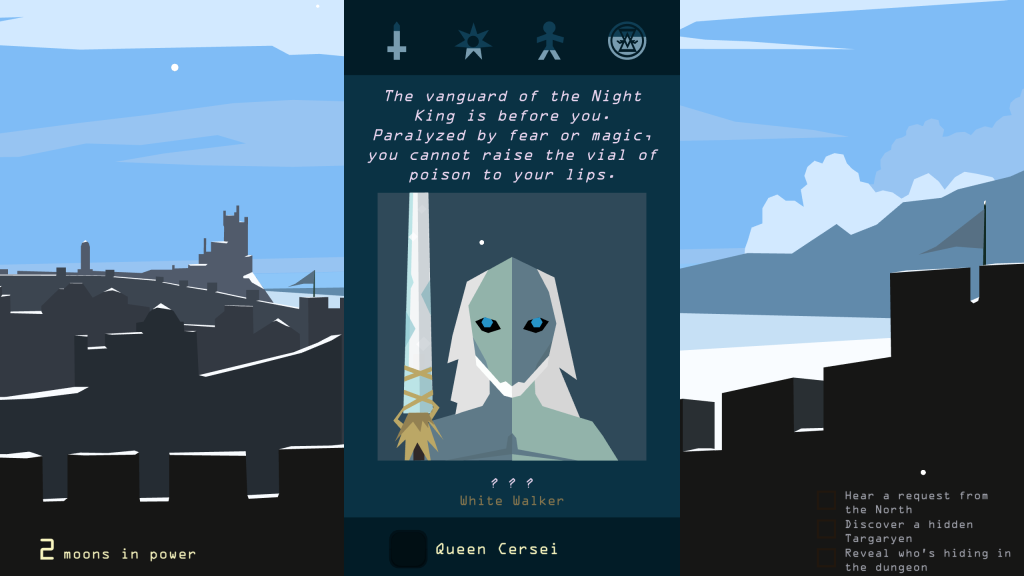 Above: It’s a nice day for a White … Walker.

You can play as a number of characters from Game of Thrones, such as Jon Snow (“You know nothing, Jon Snow” applies whenever I’m in charge, based on how poorly I play this game), Tyrion Lannister, Cersei Lannister, and Daenerys Targaryen. As with the first Reigns and Reigns: Her Majesty (which put you in the role of a ruling queen), you make decisions by swiping left or right on cards as they appear on the screen. Your choices decide the story.

It also includes minigames, and it enables you to create your own stories that depart from the series. One of the examples the press release Devolver sent us brings up exploring a Seven Kingdoms in which Sansa Stark and Jamie Lannister had married.

Daenerys may have said, “I will do what queens do, I will rule.” But all I do is die, my kingdom in ruins around me. You’ll find out if you can live up to the Mother of Dragons’ quote in October.