Livestreaming service Twitch is partnering with The Pokémon Company International to run a Pokémon movie and TV show marathon.

The Pokémon: The Series extravaganza will feature 16 movies and 19 television seasons spanning 932 episodes, and Twitch will livestream it in several different marathons from August 27 and into 2019. It’s continues a relationship that blossomed with Twitch Plays Pokémon game in 2014, and it will serve as an excellent marketing campaign for the upcoming Nintendo Pokémon games this fall.

The series marks the single longest program-related viewing event to stream on Twitch. It uses Twitch Extensions, and the broadcasts will feature an interactive overlay that allows viewers to virtually collect Pokémon badges.

The viewing event begins with the first season, Pokémon: Indigo League, on August 27 at 10:00 a.m. Pacific time for Twitch audiences in U.S., Canada, Europe, Latin America, and Australia. All content will be on the TwitchPresents channel and dubbed on its companion channels in French, German, Spanish, Italian, and Brazilian Portuguese.

The appeal of Twitch is that it is a live, shared, and interactive form of entertainment. Amplifying this aspect for viewers with an Extensions overlay, “Twitch Presents: Pokémon Badge Collector.” This Extension encourages viewers to “collect” Pokémon badges that appear on-screen for points that place them on a leaderboard. 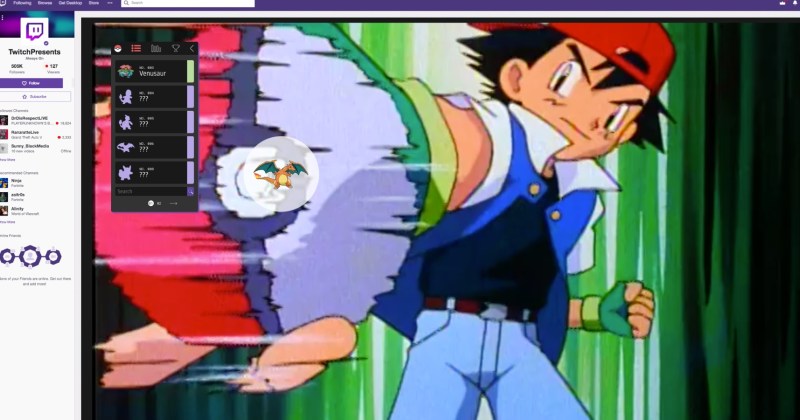 Above: Pikachu will be a big part of the giant Pokemon marathon on Twitch.

“The Twitch community has a passion for Pokémon based on the warm embrace the series received when we celebrated the brand’s 20th anniversary, as well as the cultural milestone that was set when over a hundred thousand Twitch members played Pokémon together,” said Jane Weedon, director of business development at Twitch, in a statement. “To continue to support this beloved property, our upcoming Pokémon: The Series viewing event–which is in partnership with The Pokémon Company International–marks our most ambitious block of animated programming to date in terms of duration and content. Making it even more special, an overlay created using our exclusive Extensions product will let viewers collect Pokémon when they appear on-screen for the ultimate interactive viewing experience.”

The times for the TV shows and movies are listed at www.twitch.tv/twitchpresents.

“With an extensive and growing library, Pokémon animation provides a breadth of engaging content for the community as they learn more about Pokémon,” said J.C. Smith, senior director of consumer marketing at The Pokémon Company International, in a statement. “We look forward to offering fans an opportunity to experience their favorite Pokémon TV shows and movies in a uniquely interactive way on Twitch.”