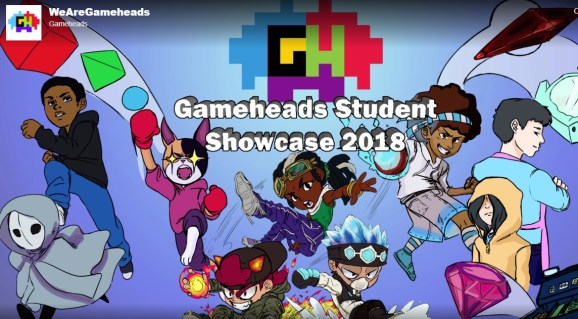 Gameheads is a nonprofit that is tackling the game industry’s diversity problem by training young people in low-income neighborhoods in Oakland, California. The program teaches students in underserved communities how to make games, and the group’s fourth annual showcase takes place today at Impact Hub Oakland from 4:45 pm to 8 p.m.

The program was created by Damon Packwood, executive director at Gameheads, as he saw the passion for games and do-it-yourself culture of kids in low-income neighborhoods. The mission is to teach kids skills they need to make games and give them a path to break into the industry. The showcase is now in its fourth year, and this year’s event is expected to draw 300 people. It will be livestreamed here.

The core program targets young people from 15 to 25. A number of game companies sponsor the program, including Kapor Center for Social Impact, GIVE, Double Fine Productions, and Big Fish. Those companies provide financial help as well as mentorship from industry professionals.

“The showcase is our favorite time of year,” said Packwood, in a statement. “We get the chance to enjoy the innovative and absolutely unique games that our students create, and the opportunity to demonstrate the genius and creativity of our young people while championing diversity and inclusion in tech.”

Gameheads uses the evolving world of video games as both a teaching tool and a platform to teach technology and equip youth of color and low-income youth to thrive and succeed in the tech and video game industries.

Through the year-long Gameheads: Classic, students work in teams to develop and design their own culturally relevant video games. In the process, students are also graduating from high school and enrolling in postsecondary education in STEAM related fields. Students from Gameheads: DevOps are training for paid contract work at tech companies across the Bay Area.

Youth of color are already playing games at higher rates — at least 10 to 30 minutes per day more than white youth. Despite these numbers, African Americans (3 percent), Latinos (7.3 percent), and East Asians (9 percent) collectively make up less than 20 percent of the people employed in the video game industry, Gameheads said. Gameheads uses this powerful medium to engage and empower young people, and ensure diversity in tech.

Over the summer, Gameheads students have developed 11 games that tackle important social issues or games that are just plain fun. Gameheads described the games as follows:

Behind the Mask, a game that explores the fears of people from the LGBTQ community through the eyes of Iry, a magical being who is forced to wear a cursed mask that makes her see things the way her parents do.

Here’s Your Change! As a cashier who lives in a community undergoing radical change, players ring up items, talk to customers, and watch as the people, environment, and community go through the process of gentrification.

The Groundz, set in Oakland circa 1993, is a hood dodge ball game where players smash on each other at parks and recs and youth development centers all across the city.

Three for All is a three-player local co-op shooter where players with unique abilities face hordes of enemies.

Pussy Punchout is a 2D beat ’em up game, designed by an all-female team, about a cat that takes matters into her own hands when she learns that neighborhood cats have been captured and put on display against their will by an evil fraternity.

Offbeat is a turn-based combat role player about an Asian-American youth who is fed up with societal pressures and decides to follow his dreams of becoming a house husband and confronts and combats the Asian-American model minority myth.

Tri-Ger is a bullet-hell experience mixed with a color-matching game and an 80’s arcade-inspired aesthetic that challenges the player to decide: Turn back now or dive headfirst into an unhealthy relationship with failure in the pursuit of something as arbitrary as a high score.

Stairway lets the player control a young boy traveling upward through an abandoned building, avoiding enemies and jumping over obstacles. As he ascends, it becomes more and more apparent — through sound, music, and gameplay — that the young boy may not be in a building after all.

Destined is about stubborn immaturity and the struggle to find it in yourself to change and improve. The puzzles throughout the game are meant to convey the difficult process of improving yourself.

Honeydew View is a visual novel about navigating high school, focusing on deep emotional connections and telling a story that reflects who the player is and what they do in the game.

Mediocre Fighter is a lean-and-mean fight where two squares battle with a plethora of punching protuberances.