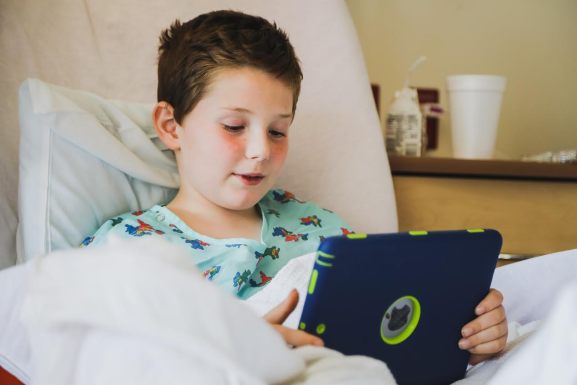 In 2009, I left a fantastic job at YouTube to join a relatively new startup: Justin.tv. I believed livestreaming was the future and spent my early days on infrastructure scaling and stability, cost control through procurement and architecture, and global connection strategy. When we pivoted to Twitch, I put years of my life into it, focusing on video software technologies and strategy and development of broadcaster success features. I felt blessed.

But over four years ago, my then-3-year-old son was diagnosed with B-Cell acute lymphoblastic leukemia. We had minutes to try to process the diagnosis – treatment had to start immediately. Over the next two and a half years, we were in and out of hospitals constantly for planned procedures and unscheduled fevers. Today I’m relieved to say he’s doing well; we continue to take it one day at a time, knowing his cancer could still return.

Being exposed to the lives sick children face during long-term hospitalization was a profound experience for me. Beyond the obvious – the incomprehensible stress and fear of battling often life-threatening illnesses – are more subtle impacts: being away from school and home, missing out on classes, schoolwork, friends, conversation and play. Lost relationships, lost joy, lost learning, lost childhood – all of these effects can combine to lower a patient’s emotional outlook, an important factor in facing long-term pain and recovery.

Yet a growing set of forces have combined over the past few years to offer hospitals new options to comfort patients, particularly children. Games and entertainment increasingly are seen as critical paths to helping patients cope with illness, hospitalization and recovery. Modernizing how care-giving facilities host and deliver this kind of care, however, is a huge undertaking, one that may require new ways of thinking about hospital tech and relief.

“Distraction therapy,” diverting the attention of patients suffering from pain or discomfort with sensory stimuli, is a critical tool when you’re hospitalized. Meaningful mental, emotional and social stimulation — whether through music, images, communication, or, for your typical child, video games — can help ease feelings of suffering and, consequently, reduce the volume of pain medication prescribed. For children especially, keeping the brain actively engaged through long-term treatment is important as they continue to grow and develop as people. This also alleviates the burden of often overworked hospital caregivers and administrators.

The tech that exists in most hospitals to support distraction therapy is, frankly, limited. You can probably picture a standard hospital room with an old TV hanging from the ceiling and a few random cable channel options, of course. But beyond that are facilities with aging play rooms, limited wireless internet, and even then, guest networks without the bandwidth to support high-speed functions. So even if a child was fortunate enough to own a laptop, tablet or phone — many aren’t — their ability to stream, download or connect to a server with other people is likely sorely lacking. And that matters: kids want to watch and play the new things their friends are obsessed with, not whichever older experiences happen to be in the game room down the hall.

Behind this antiquated tech is often expensive infrastructure from an earlier era: costly satellite dishes, gargantuan basement servers, clunky keyboards, remotes, and TV settop boxes … all of it to deliver poor performance and limited choice, a great deal of it too cumbersome for patients who may have limited physical capability or range of motion. And that’s assuming it all works — the high costs to maintain, repair and replace tech means many facilities suffer outdated equipment and solutions.

Patients in hospitals want to connect with the outside world and consume content the same way they do at home. But modern hospital infrastructure is rooted in an image of home entertainment — a TV in the bedroom, a game console in the living room, a PC in the office – that’s increasingly not reflective of home life anymore. Entertainment has transformed in the past decade as the costs of wireless connectivity have fallen. Now the TV, the game console, the PC, are often with us all the time in the form of tablets and phones. By and large, hospitals have yet to truly adapt to this sweeping cultural change, and the impact of that is exacerbated on children, who are often too young to know any other way to consume content than we do today.

A new generation of patient care

A comprehensive shift toward BOYD (“bring your own device”) design, built alongside cloud-based content networks, could have a huge impact on patients with serious illnesses while saving costs and streamlining operations. Families would be free to use their own devices with a network built to fully power their capabilities, and new tablets could be provided to patients unable to afford them for far less than hospitals spend now on entertainment systems. Curation and age filtering would of course be key in such an environment to protect children.

This approach would also go a long way to making facilities more accommodating to families as a whole, who often spend just as much time in hospitals as their sick loved ones. Moreover, it would better help parents control the potentially harmful effects long-term hospitalization can have on their children’s emotional, academic, and social development.

I still believe streaming is the future, that games and online worlds can be transformative tools for community, awareness and entertainment. But I see now the broader possibilities Twitch and YouTube were created to explore. Giving those suffering from long-term illnesses access to the same comforts and opportunities as before their hospitalization allows patients to leave facilities with newfound intellectual passions and relieved feelings of social isolation while providing comfort to their families. And that’s the good we can achieve when we make it easy for people to stay connected to their world.

Jonathan Shipman is CTO of ZOTT, an over-the-top media distribution platform with a network of highly curated entertainment and educational content services.