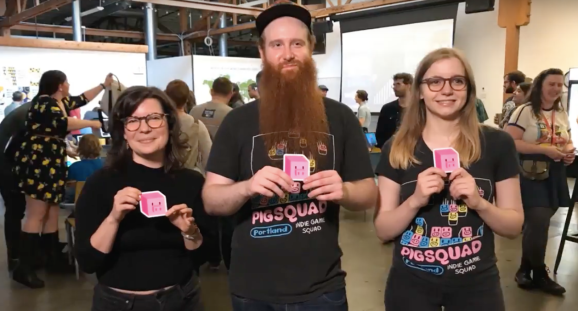 Portland Indie Game Squad (PIGSquad for short) is a nonprofit organization that is cultivating a thriving game dev community in the Pacific Northwest. Founder and president Will Lewis had community organizing experience from his time as a film student, and he wanted to do something similar for the local games industry. When he started hosting PIGSquad events in 2011, around eight people showed up every month.

Now it’s more like 50 to 90 people at each game jam, workshop, or networking event. At larger gatherings, that number that can easily shoot up into the hundreds.

Part of PIGSquad’s success has to do with its accessibility: It’s open to new and veteran developers alike. The organization also taps into Portland’s deep well of creative talent, drawing in a diverse crowd of musicians, artists, animators, and more. This unique concoction of skills and backgrounds can, at times, lead to the creation of real studios and retail products. Lewis’s Rose City Games, for example, grew directly out of the PIGSquad community. In addition to offering consultations and hosting special events, Rose City is working on games like The World Next Door, a narrative adventure made in partnership with VIZMedia.

To see what a typical PIGSquad meetup is like, check out our video below about one of the organization’s Summer Slow Jam events, where attendees had a week to make a game based on predetermined topics and themes.