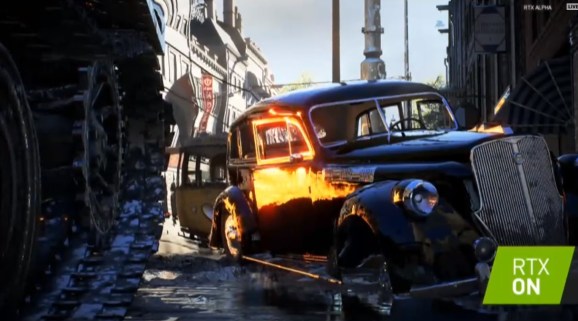 See the realistic reflection on the side of the car in Battlefield V with Nvidia RTX.

Electronic Arts has pushed Battlefield V out of October in favor of a November 20 release date. The publisher cited the need for “final adjustments,” but investors don’t seem interested in the excuse. EA’s stock price has dropped 9 percent from $128.52 at the end of Wednesday down to $116.68, according to Google Finance.

Battlefield developer DICE says that it will use the delay to improve the mechanics and to add more content to its Tides of War live service, which regularly adds new content to the World War II shooter. Waiting to get a better game at launch seems like a good thing, and Baird Equity Research analyst Colin Sebastian agrees with that — especially because it helps Battlefield dodge some of the holidays bigger games.

“We note this is an unusually late delay for a holiday video game release,” said Sebastian. “But the October release squeezed between COD and RDR was already challenging, and our experience suggests there is usually a favorable trade-off over the longer term when sacrificing near-term sales for improved product quality.” 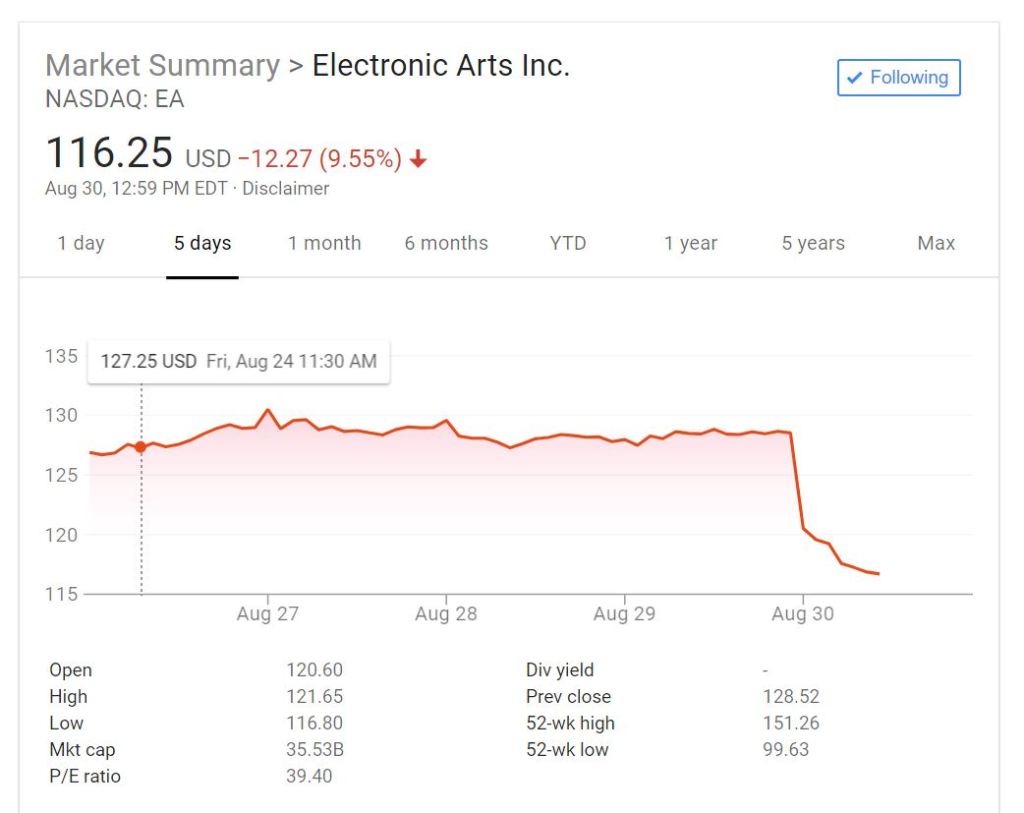 Above: EA’s stock price is hurting.

The market’s negative reaction is in response to EA’s disclosure that the delay has forced the company to reduce its financial outlook. It has dropped its fiscal year guidance down by $350 million — although only a portion of that is due to the Battlefield V delay.

But EA’s stock price is likely also going through a corrective period. It is down from an all-time high of nearly $150 in July, and it is looking for its next hit. While it can consistently rely on revenue from FIFA Ultimate Team and Madden, it is looking to establish its next major blockbuster shooter. Battlefield V is looking promising, but it also faces skepticism from some fans and tough competition from Call of Duty: Black Ops 4, PlayerUnknown’s Battlegrounds, and Fortnite. Then in March, EA’s BioWare team launches its new online role-playing shooter, Anthem.

Even if either of those games are hits, EA still hasn’t proven that it can generate revenue from an ongoing game-as-a-service in a way that does not rely on loot boxes. That business model, where players pay for boxes that may or may not contain a desirable digital item, has fallen out of fashion fast as fans lashed out against it and regulators started looking into it as potential gambling.

So EA may have to prove that it can turn Battlefield V and Anthem into successes, and Sebastian is confident that it will.

“While there may be some lingering concerns over EA product development and execution, we believe a one-month delay in exchange for a stronger game is likely a worthwhile tradeoff,” said Sebastian. “No change to price target or our longer-term positive views on EA.”

Sebastian has a price target of $154 for EA and expects it to keep outperforming its current price.