Chances are you’ve heard about how huge esports is becoming. It’s on TV channels like ESPN and TBS, it has hundreds of thousands –or even millions — of dollars in prizes. And it’s the industry that’s drawn investment from a number of mainstream brands, and even A-list celebrities such as Jennifer Lopez and Shaquille O’Neal.

And while you might be aware of the gigantic sums of money these players (often teens) are playing for, you’re probably not aware just how many other career paths exist in esports.

Gone are the days where you could only make a living in professional gaming if you in the top 0.001 percent of players in the world. Account managers, business development executives, digital marketers and all of the conventional job titles now exist in esports as the industry has reached a size where any skill set can lead to a full-time paid career.

One of the websites we operate at ghostwhite is the largest esports jobs website there is, HitmarkerJobs.com, which posted 2,497 jobs in esports in just the first half of 2018. We’ve seen it all from internal travel agents for esports tournament organizers, to managing a gaming house for a team on a full-time basis, to even being a freelance meme specialist earning $17 an hour!

There certainly hasn’t been a better time to get involved in the scene than now, but to understand the significance of why so many full-time careers is such a warming sight we must journey back to the dark days of esports, where passion funded people’s exploits, and absolutely nothing else.

Our Phil Huggan, founder of ghostwhite, joins many in esports as someone who experienced the scene when it was undeveloped like this. In April 2011, he assisted in running EGL2, an esports event in the U.K. Despite it being the first competitive PlayStation event in Europe for Call of Duty Black Ops and despite him creating the event’s schedule, organizing attending teams, sorting where everyone was playing in the arena, running the broadcast and even commentating a few of the games, he didn’t get paid. Phil stayed in an elderly woman’s spare room with two other people and slept on a futon, and still finished the event out of pocket.

Stories like this aren’t uncommon if you journey back into esports’ youth. Working for free was the norm, not the exception. To see esports jobs evolve into what they are now is truly a brilliant thing to see.

So what exactly do esports jobs look like in the here and now? Well, since we run a jobs website in the space we have the data to paint a pretty accurate picture and recently published an infographic depicting the trends in esports jobs from the first six months of 2018. We produced this from the data of 2,497 jobs: 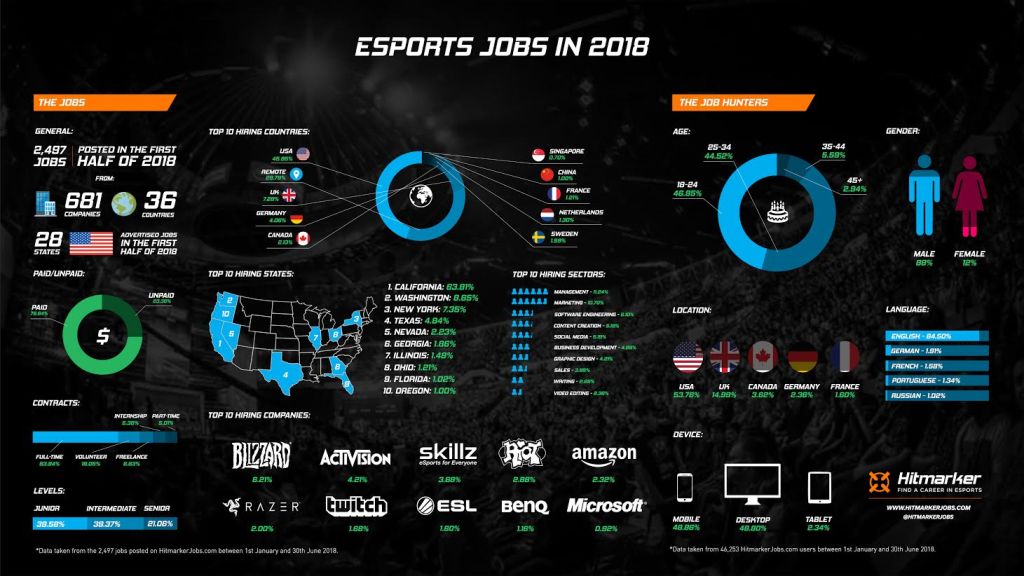 Above: A statistical breakdown of esports jobs in the first six months of 2018 at HitmarkerJobs

One of the most notable points in the infographic is how almost a quarter of jobs are still unpaid. This may seem shocking to people not fully familiar with esports, and it certainly isn’t something anyone in the scene is happy to see, but the progress being made is incredible.

Thirty-six countries hired for people in esports in the first half of 2018, showing how the industry is now a global phenomenon. Careers are available in all shapes and sizes, too. Management and marketing make up just over 20 percent of what’s out there, but with everything from product management with industry veterans Turtle Beach to part-time, remote team management for Method, you’re sure to find your fit in this industry if you have the passion for it.

Take these jobs as your proof. Just recently the Philadelphia Fusion, a team competing in the Overwatch League — which had its Season One finals aired on ESPN at the end of July — was looking for a full-time house manager to run the team’s gaming residence. Some of the responsibilities included handling the maintenance of the house through ordering furniture and booking cleaners, planning team-building activities to help the players bond, and liaise with the marketing team to produce content around the players. Just to reiterate, this was a full-time career.

ESL, one of the elite tournament organizers in esports, was hiring for a travel agent earlier this year. They needed someone to arrange and book travel for players and hired talent coming to and from the event.

Unbelievably, neither of these have even been the coolest jobs we’ve seen this year! Philadelphia Fusion posted a job advert for a meme specialist to work on a seasonal basis. Earning $17 an hour, the candidate would be creating memes for their digital channels to help boost the brand’s visibility.

These are just some of the jobs that have been available in esports recently, and more great careers appear everyday. And the best thing is it’s possible for anyone to get into esports.

How to break in

If you’re interested in getting into esports then a platform you absolutely need to be visible on is Twitter. Every esports title has an active presence on Twitter, and you can use it to build your own brand, connect with like-minded people in the scene and even find jobs. It’s a pet peeve of ours, but a lot of people and organizations will post that they’re looking for employees/freelancers on Twitter. One of our employees actually got approached on Twitter directly to freelance for an esports news website.

Another thing that will serve you well to get into esports is showing your passion and attending events. In a YouTube video from CompLexity Gaming, one of their employees tells the story of how he got into esports, which concludes with him taking a train ride with a 6-hour layover to an event in Atlanta to hand out resumes to anyone who’d take one. This ultimately netted him a salary from CompLexity and the chance to work with them in Texas. Esports was built by hustlers, so you’ll find a lot of organizations are very open to helping people who demonstrate their eagerness to get involved.

In a Medium post that gives advice on how to get a job in esports from the CompLexity CEO Jason Lake, he suggests doing whatever you can to give yourself a body of work you can apply to jobs with. He uses the examples of starting a daily blog of your own if you’re an aspiring journalist, or by commentating over past games and uploading them to YouTube if you dream of being an esports commentator (or “shoutcaster”).

This a great point and something we frequently recommend. The benefits to it are endless. It provides you with a working example to show prospective employers if you haven’t got any relevant experience, it will hone your skills and it shows you’re proactive and passion about esports. Following this advice bodes well to locking down a career in esports.

If you have the passion for esports and follow these pointers, getting a career in the scene is doable. There are paid careers in every sector now and people who want to help other gamers make their way into the scene. It’s a wonderful industry going through a growth spurt that keeps on breaking records, and it would love to have you!

Rich Huggan is the managing director of ghostwhite, an esports entity that operates various brands within the scene. One of which is HitmarkerJobs.com, the largest jobs board in esports.