China’s Tencent is extending its reach into the video game industry with the announcement of a plan to create original game properties with Square Enix, the Japanese maker of publisher of the Final Fantasy and Tomb Raider series.

Tencent Holdings and Square Enix said they have signed a letter of intent for a strategic alliance. The companies could create a joint venture company that will create triple-A games based on new intellectual properties or licensing existing franchises.

“The alliance will enable us to couple our broad range of internet service capabilities to Square Enix Group’s superb creativity, and provide our customers with unprecedented content experiences on a global basis,” said Steven Ma, senior vice president of Tencent Group, in a statement.

Deals between Chinese and other Asian companies are becoming increasingly common, in part because Chinese consumers have a big appetite for anime-based games that are popular in Japan. Part of the reason that Tencent has a lot of capital to deploy is that it generates so much money from its internet business such as social media and web portals. But Chinese game companies in general have better access to capital.

Market researcher Niko Partners recently noted a report on the competitiveness of listed games companies in China, released by CNG (a part of the Chinese government) at the 2018 China Joy expo. The report said 191 Chinese games companies have been listed publicly as of the end of July, with an additional 20 preparing for initial public offerings.

“Tencent continues its global expansion by investing in Square Enix in Japan,” said Lisa Cosmas Hanson, managing director at Niko Partners. “Tencent has invested in many games companies in many countries, though we have not seen too many in Japan.”

The partnership is one of many that Tencent has created in games over the years, almost always as a collaborating investment partner, rather than an outright acquisition. It’s a strategy that has helped it become the world’s biggest game company.

For instance, Tencent owns 40 percent of Epic Games, the maker of Fortnite. 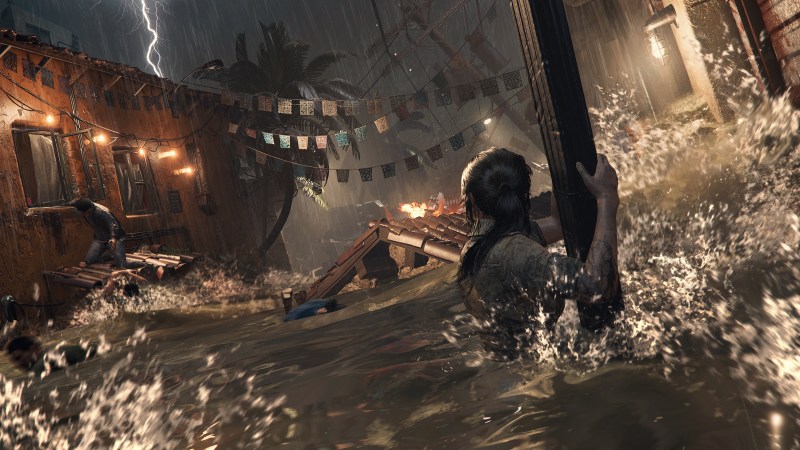 Above: Shadow of the Tomb Raider The Flood Water Screenshot

Tencent also came to the rescue of Ubisoft earlier this year as a “white knight,” warding off a hostile takeover of the French video game company by entertainment conglomerate Vivendi. Tencent now owns 5 percent of Ubisoft. Tencent also did the same for Activision Blizzard, investing in the company in a bid to extract both Activision and Blizzard from Vivendi in 2013.

Sometimes the investment deals lead to bigger acquisitions. In 2011, Tencent bought majority ownership of League of Legends maker Riot Games, and it acquired the whole Los Angeles company in 2015. In 2016, Tencent bought a majority stake in Finland’s  Supercell, maker of Clash Royale and Clash of Clans, for $8.6 billion.

Tencent said it will disclose more information on the joint venture once more progress is made. Square Enix president Yosuke Matsuda said the deal could boost the company’s strategy.

“Tencent Group and Square Enix Group share the vision of utilizing technology and creativity to deliver unprecedented entertainment experiences and services to a global audience,” said Masuda, in a statement. “This newly established alliance will be a strong boost to Square Enix Group’s strategy to diversify our content offerings and expand access channels to a wider customer base.”

Square Enix’s next big game, Shadow of the Tomb Raider from Eidos Montreal, will debut on September 14 on the consoles and PC. Besides Tomb Raider and Final Fantasy, Square Enix also has properties such as Kingdom Hearts, Nier: Automata, Dragon Quest, Chrono Trigger, Just Cause, and many others.