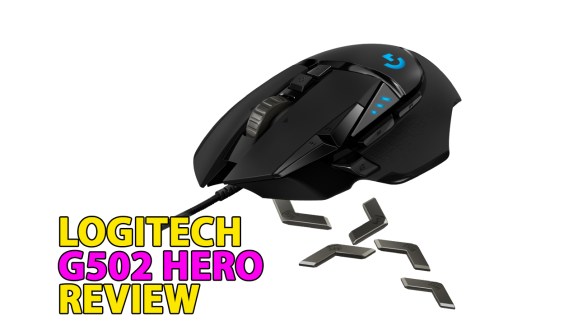 Logitech’s G502 mouse is one of the best-selling PC peripherals in the world. It is a beloved gaming mouse that people love for its form-factor and high-performing optical sensor, but now Logitech has an updated version called the G502 Hero. But why mess with a good thing? Well, because the holidays are coming, and the company needed to refresh its products — but also, it didn’t mess with much.

The G502 Hero is shipping in October for $80. The big new feature is the inclusion of Logitech’s Hero sensor, which is an updated version of the optical tracking system that it built with manufacturer Pixart. Logitech promises 16,000 counts per inch (CPI) and 400 inches per second (IPS), but as usual, those numbers don’t tell much of the story when it comes to a gaming mouse.

It’s the real-world use where you notice the accuracy and precision of the G502 Hero.

The G502 Hero looks a lot like the original G502, which I’ve only briefly used at events and never owned. Like the original, it has a lot of sharp angles that fit into your hand relatively well. It also has the clutch on your thumb, which enables you to push to turn down your sensitivity for brief periods. That’s excellent for sniping and other mechanics that require fine precision.

The 502 has a bit of a taller posterior, and it tapers from stern to bow. I’ve grown used to the Logitech G903 recently, which doesn’t have that sloping angle, and I find that extremely comfortable. The G502 doesn’t quite fit my hand in the exact same way … but I don’t know if that helps you. Your hands are different. Still, I can say that it remained comfortable even if it isn’t perfect.

Logitech also gives you some options to dial in the feel of the 502. The Hero mouse comes with a bunch of additional weights that you can plug into the base of the chassis if you want something with more heft. I put them all of the 3.6-gram weights into the mouse and then started removing them until it felt right. With all of the extra mass, I enjoyed the feeling of moving the mouse around a pad, but I could feel some strain in my wrist when I had to lift it off the surface. Just 3.6 grams extra was enough for me, and that made a great mouse feel even better.

Customization also happens on the software side. You can still use the Logitech Gaming Software to control the G502 Hero, but I’ve never loved that app. It is slow and confusing. It always takes me too long to do things. Thankfully, Logitech is introducing the alternative G Hub app with this mouse. G Hub is in beta, but it seems promising, and it gives you all of the options you need to adjust the sensitivity and other features of your new device.

As accurate as you’ll need

But if the sensor is the big feature, it’s a winner. The Pixart PMW3366 sensor that was in the last G502 was no slouch, and the underlying technology isn’t anything revolutionary. But the Hero optical tracker always keeps up with me.

I’m not an esports pro, so I don’t know if I’ll ever need a better sensor than this. And I think that the Hero is on the cusp of surpassing all human capability when it comes to what it can accurately track. Again, we’re seeing these advancements across optical sensors in the $70-plus gaming mice category, but Logitech is leading that pack.

I’m OK with the design of the G502 Hero. It screams “gamer!” maybe a bit too loud, but it is still subtle in key ways. I think its black paint job looks excellent. The various angled pieces of plastic all look different under lights, which gives the device a futuristic, stealth fighter personality.

But I wish that Logitech would commit to going all-out gamer aesthetic if it’s going to keep the spaceship design. Instead, for the G502, the RGB LED lighting only really shows up in the “G” logo on its back. If I want my mouse to standout, I want it to really stand out. And of all the elements to light up with LEDs, a company logo is my least favorite. It’s tacky.

The G502 Hero is an excellent mouse for people who play a lot of shooters. Its performance is top-of-the-category. Its optional weights mean you can get the feel you want. The clutch gives you an advantage in sniping scenarios. I would personally want a wireless one that works with Logitech’s wireless charging Powerplay mat, but I’m probably gonna keep using this one for a while until that happens.

Based on my experience and the mass appeal of the previous G502, it’s easy to recommend this one. You’ll get your money’s worth, and I can’t imagine that you’ll feel the need to upgrade again for years.

The Logitech G502 is shipping in October for $80. The company provided a sample unit for the purpose of this review .