When Talking Tom developer Outfit7 was sold to a Chinese company in January 2017 for $1 billion, it might have easily been seen as the peak. Talking Tom debuted in 2010 as a silly iPhone app that mimicked what kids told it to do. It would fart, talking a funny voice, and sing. Who would have thought it would be downloaded billions of times?

And yet that wasn’t the peak. At the time of the acquisition by United Luck Consortium (headed by Chinese chemical firm Zhejiang Jinke Entertainment Culture), Talking Tom had been downloaded 5.6 billion times. The cofounder of the Cyprus company, Samo Login, and former CEO Jure Prek stepped down. And Žiga Vavpotič became chairman and Xinyu Qian was named CEO.

But the funny thing is that Talking Tom has kept growing. It’s now at 8 billion downloads, 350 million monthly active users, 21 million YouTube subscribers, and 20 games. A feature film is in the works, and the characters from the game star in an animated series on YouTube and Netflix. It turns out that Vavpotič came into the leadership of Outfit7, now based in Cyprus with development in Slovenia, at the right time. We talked with him about the business of maintaining a franchise with a single funny cat. 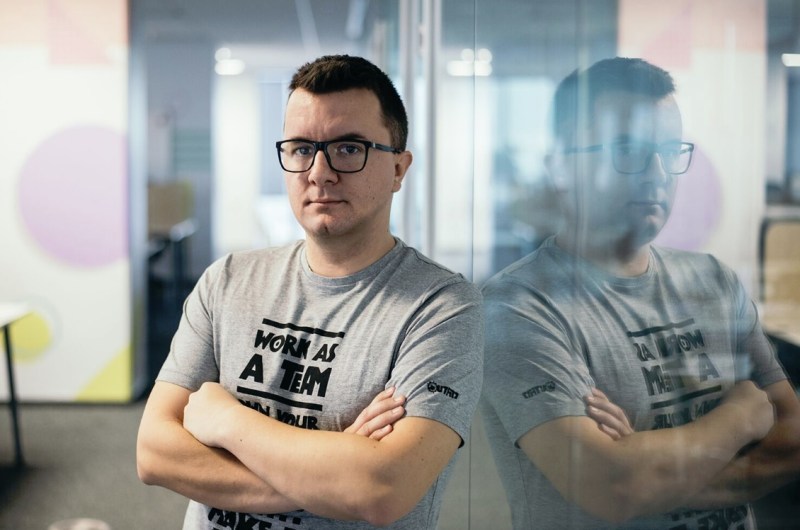 Above: Ziga Vavpotič is chairman of Outfit7.

GamesBeat: How long have you been on the Outfit7 team?

Žiga Vavpotič: In September it will be four years. I joined with the sexiest title ever. I was a talent acquisition specialist, on contract for a couple of months, and then the founders asked me to move to Cyprus and become the chief operations officer for a startup inside the Outfit7 group. That was my start. It’s still a great journey. A lot of things have happened in four years.

GamesBeat: What’s happened in that time, to you personally and to the company?

Vavpotič: My background is a bit different, because I didn’t come from business or the mobile industry. I was founder of one of the best-known NGOs in Slovenia, Ypsilon, dealing with young people. We dealt with a big project, an intergenerational project where 10,000 young people were teaching 15,000 older people how to use computers.

Coming from the NGO world, two things I brought with me. One is that the vision is something that’s very strong. You need to empower everyone around you with it. On the other hand, understanding this global product — you can feed the product from an age of one year to 110. This is something I learned when I joined Outfit7 and saw Talking Tom. It became legendary in the mobile world. It’s bringing a lot of joy around the world. We’re very proud of it, looking at the numbers. We have 20 games, 350 million monthly active users, 21 million YouTube subscribers, and more than one download per person on the planet, 8 billion downloads. It’s a big responsibility. The most important is that 270 amazing people from 28 countries are putting this success together.

For me, joining a mobile game company was something special. When I joined, Outfit7 had just had a big hit with Talking Tom. It was just becoming a great success. All the important milestones — a billion-dollar acquisition maybe isn’t unique in mobile gaming, but it is in our part of the world. Learning to cope with different cultures, growing the company, following different leadership in the ownership and their vision, it’s always interesting.

GamesBeat: When did you become chairman?

Vavpotič: I became chairman right after the acquisition. It was a joint decision. The previous founders proposed me, and the new owner decided to put me in that position. It shows a great trust in the management, that the Chinese didn’t interfere a lot. They trust us with what we’re doing. It’s a year and a half, or a bit more. December will be two years since the acquisition, closing everything. I became chairman in February.

GamesBeat: It sounds like a big job. You have an enviable franchise there. It seems like it’s hit some almost impossible numbers, if you have more than one download for everyone on the planet. How do you think it became that popular? What’s kept it going all these years?

Vavpotič: We need to recognize the founders of the company. They were at the right time with the right product. When they launched Talking Tom, they didn’t go to the game segment. They went to entertainment. It was the start of the iOS store there. Entertainment was quite empty as a category. They managed it pretty well. They did very well in how they ran the brand. They created Talking Tom and Friends, with different characters. They stuck to what they were good at, these casual games. The mission, to build entertainment using this infectious humor and creativity to empower the inner child in all of us, that’s led to this success.

They managed to center the video content. As you know, we’re very big on YouTube, with 21 million YouTube subscribers and more than 23 billion views. They stuck to that focus, and they were able to build a great story to sell the company. They had a good theme.

Something that’s fundamental — I’m not sure how you much you know about it, but it’s the company culture. We’re based on five values: make it happen, have fun, work as a team, no limits, and — I need to be more careful now speaking with journalists, but in the company we say, “own your shit.” [laughs] Whenever marketing and PR are trying to keep me under control, they want me to say “own your hit,” but it’s really “own your shit.” It’s about responsibility.

The new owners are bringing new opportunities. I love the vision of Mr. Zhu, who’s trying to help everyone understand the value of bringing families together. We’re very big online, but he always says there’s a huge opportunity offline as well. It’s about values. It’s about bringing families together. We’re starting a great journey with licensing, especially with the theme parks.

That’s the combination: good strategy, good timing, and good execution with the right people. And creating something very global. That’s the key to success.

GamesBeat: Can you tell me more about Mr. Zhu and his company? Western readers probably aren’t very familiar with him.

Vavpotič: Mr. Zhu is a great business leader from Hangzhou, China. He comes from, I would say, more traditional business. Jinke, the holding group, is a company on the stock exchange in China, before they bought Outfit7. He’s a very pragmatic leader. He understands where the world is moving.

He started his business life with a chemical company, and then he’s invested in real estate, in hotels, in shopping malls. Then, I’d say, he got the feeling that technology is important, something that will create an important path to the future. He invested in a mobile game publisher in China, focused around smaller games. Then he decided he’d like to find a good target in the west. Even at that point, Talking Tom was one of the biggest western properties in China, but he saw a potential to help us with the Chinese market, and to combine the vision of online and offline worlds to create — I might say something like a new Disney, a family entertainment company that was born in the mobile world. 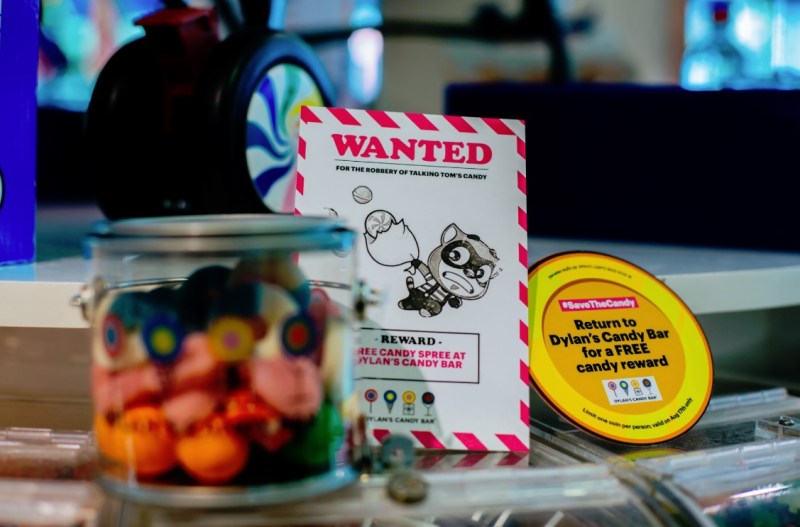 GamesBeat: Anyone can probably understand why Tom became so popular at first around its humor, but how does it hang on to an audience? It seems like the challenge would be finding a way to keep people playing for a long time. How do you retain people in this kind of app?

Vavpotič: With My Talking Tom, the biggest of our apps, we keep a very loyal audience. We have to think along a very long term. Creating a new brand is not the easiest thing. There haven’t been many mobile developers who’ve created two hit brands, but hopefully this will be something we can do in the future.

With Talking Tom Candy Run we tried to bring new games, new apps, which appeal to the whole family. My belief is that our games are something that a five-year-old child can enjoy, and also learn in the process. My Talking Tom is about learning responsibility. Taking care of Tom is a big part of it. But then you have mothers and fathers who just have fun joking around, repeating the funny lines. Even my grandmother loves our games. Whenever I’m with her, she’s always asking me, “What’s new?”

Keeping these people through 20 years, you need to entertain your audience with something fresh and new. You need to keep up a pace. I’d argue that the fun factor is that pace. You probably saw that we just released Candy Run. We’re very happy with the result of the big launch event we did in Los Angeles. We’ve never done something that crazy on the ground, but we decided to try it, and it was a great success, bringing Tom outside the mobile world and onto the street to have fun with families there.

We need to be constantly looking for something new, something fun. We need to keep entertaining the world. It’s a great challenge for me, for my team, and for everyone involved in Outfit7.

GamesBeat: It seems like there’s also a big opportunity in merchandising and IP licensing. How have you approached this compared to something like Angry Birds?

Vavpotič: I always say that Angry Birds was an amazing story. They had amazing success. We’re all in the same market fighting for our users’ time, but on the other hand, we can learn from each other. In that regard, especially around licensing and merchandising, Rovio did way more than we did. It’s a good debate. They were out at the right time in some ways. But they came out with a lot of merchandising way before their movie was out. You need to be careful.

One thing we’ve learned is that we’re good at creating mobile games. For Mr. Zhu, merchandising is the next step, certainly, but we’re trying to learn. We’re on a great learning path, I would say. You can’t go too fast. It’s a very different business. Mobile games are completely different from toys – how you make the product, how you sell the product, the return on investment, how global you can be. It’s a challenge, but we’re taking it. We haven’t just jumped in. We’re still on the learning curve. You need to do this right.

Above: Talking Tom gets around.

GamesBeat: You have a theme park that you’re contemplating. What are the details on that?

Vavpotič: It’s an idea. Theme parks are very, very popular in China. It’s a big thing there. Families come with their kids. At the moment, we’ve opened one in the Shaoxing, Zhejiang area, which is a kind of home area for Mr. Zhu, very close to Shanghai. It shows these values, in a sense, going back home. It’s an indoor park. The plan is that together with the owners, we’ll open three theme parks this year. But we’re just in the final stages of negotiations — we’re planning a bigger theme park, an outdoor water park, in Cyprus.

With these steps, we’re trying something new. The one we opened in China showed that kids recognize Tom offline. They like to be surrounded by him. The next step will be finding more spots in Europe, and eventually the United States. But again, it’s a different business than mobile games. We have a great passion to learn and crack this market really well.